Such was the interest in working out how they were prepared for burial and preserved, that multiple “mummy unwrapping” events were held.

Ilona Regulski, curator of Egyptian Written Culture at the British Museum, says these were “popular events” although not seen as entertainment.

“It was to understand the burial rites, the way mummies were wrapped, [how] amulets were wrapped inside the mummies – 200 years later, 300 years later we don’t do that any more but at the time this was their way of scientifically investigating something,” Regulski said. 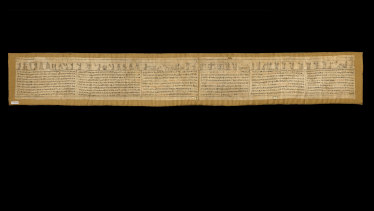 The mummy bandage of Aberuai.Credit:Georges Poncet

She is preparing to exhibit, for the first time, the collected linen fragments of a mummy bandage belonging to a lady named Aberuai from Saqqara, near Cairo, normally on display at the Louvre Museum in Paris.

Pieces of the bandage, inscribed with hieroglyphs, were given to attendees of a mummy unwrapping event, meaning they ended up spread across Europe.

“And so scholars have made an effort to bring all the pieces back together and trace where they went, and it was huge research, and now we’re able to display this piece and tell that story which is really quite exciting,” she said.

It’s unlikely the gathered pieces make a complete wrapping as it’s not known how long it was originally. But the exhibit does offer an insight not just into ancient Egyptians but also into the way scholars have sought to understand them. 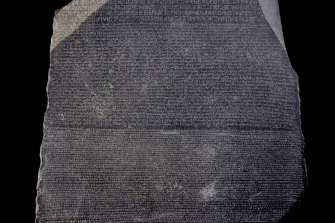 Today’s technology, such as CT scanning, means historical violations like handling and unwrapping precious mummies are no longer necessary to unearth clues about how they were prepared for burial.

But not all new revelations are the result of technology. The 1799 unearthing of the Rosetta Stone is still yielding new understandings about hieroglyphs.

The stone is the British Museum’s star object, and was one of around two dozen antiquities that could be moved to London under an agreement between Egypt, France and Britain.

The stone, a fragment of a larger slab, contains a decree written in three types of writing: demotic, Ancient Greek and hieroglyphs. 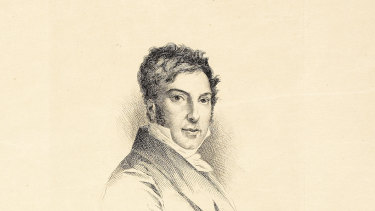 By the end of the 4th century, hieroglyphs had fallen out of use, along with the understanding of the pictures that are synonymous with Ancient Egypt.

But because Ancient Greek could still be read in 1822, Jean-Francois Champollion was able to crack the hieroglyphic code, following earlier breakthroughs but British physicist Thomas Young.

While the focus has always been on the role the Rosetta Stone played in unlocking the complex language, the actual decree in one language and two scripts were copied onto multiple stones which are now being found, meaning there are in fact, multiple “Rosetta” stones. 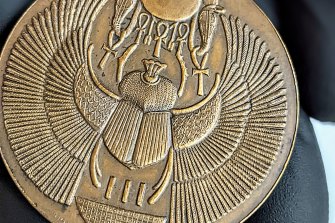 One of these will go on display in the British Museum’s exhibit: Hieroglyphs: unlocking ancient Egypt.

Regulski said thanks to the stones, discoveries were still being made about the language, including that it was phonetic.

“We kind of know the grammar, we know a lot of the vocabulary but we’re still discovering new signs, new words and the verb forms are very difficult. 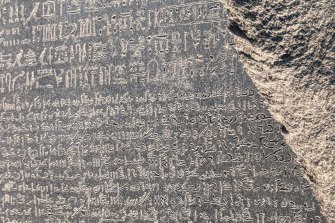 The Rosetta Stone on display at the British Museum in London.Credit:Latika Bourke

“We still don’t know everything, maybe there’s certain aspects we will never find out.

“Usually you can read around 85 per cent of the text and then we always joke that the other 15 per cent will take us another three years,” she said.

The exhibition, which includes Queen Nedjmet’s funeral papyrus – her four-metre-long Book of the Dead, celebrates 200 years since hieroglyphs were first understood in modern times, but Regulski says budding Egyptologists should not expect to become instant experts.

“You will not become an Egyptologist from seeing the exhibition but by taking the visitor through the story of decipherment, you will get an idea of how Champollion and Thomas Young deciphered it and so this will make you understand what it takes to be able to read hieroglyphs,” she said.

The exhibition runs from October 13 to February 19.