Washington: As coronavirus-ravaged countries such as India scramble to secure more COVID-19 vaccines, the United States is facing an altogether different challenge: it is rapidly running out of people willing to get vaccinated.

In the early days of the US rollout, competition for vaccine slots was so intense that securing an appointment was compared to scoring Bruce Springsteen tickets. Some Americans flew interstate to get vaccinated while others waited at pharmacies at closing time in the hope of being granted a spare dose.

Now the biggest problem is a lack of demand rather than supply. According to the Centres for Disease Control, the US recorded 1.8 million administered doses on Wednesday, US time, significantly down on a peak of 4.6 million on April 10.

A poll released this week by the Kaiser Family Foundation showed that 13 per cent of Americans say they will definitely not get vaccinated, 6 per cent say will do so only if forced and another 15 per cent are still taking a “wait and see” approach.

The vaccine hesitancy is concentrated in predominantly Republican-voting areas. 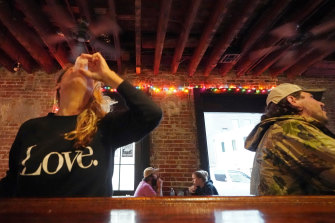 Shots for shots: Louisiana’s vaccine take-up rate is so low that some New Orleans bars have been sponsored to offer free drinks to those who got their COVID vaccines. Credit:AP

Demand is now so low in Louisiana that the state has asked the federal government to reduce its vaccine allotment in order to stop doses going to waste.

State governments, businesses and non-profits have begun turning to increasingly creative measures to lure vaccine-hesitant Americans into getting a jab.

The big focus of the next stage of the drive is younger Americans who aren’t necessarily anti-vaccination but haven’t yet got around to it.

New Jersey Governor Phil Murphy this week announced a “shot and beer” program to encourage residents in his state to get vaccinated. Those who have their first vaccine dose in May can take their vaccination card to a participating brewery for a free beer.

Connecticut has a similar program, and some bars in New Orleans have turned into vaccination sites offering free whisky or tequila shots to people who show up to get the COVID shot.

In a bid to encourage younger people in his state, West Virginia Governor Jim Justice has offered all 16 to 35-year-olds a $US100 ($128) savings bond if they get vaccinated.

Maryland is offering $US100 payments to state employees who get fully vaccinated, while the City of Detroit is handing out $US50 prepaid debit cards to anyone who drives a fellow resident to a vaccination site.

“I don’t know any place else in the country that’s doing this,” Detroit Mayor Mike Duggan said when announcing the scheme. “So we made up a set of rules and we’re gonna try this. We’re in uncharted territory here.”

New York has tried to add allure to the vaccination process by turning the American Museum of Natural History into a mass vaccination centre. As well as being vaccinated beneath a giant replica of a blue whale, people receive a voucher for a complimentary museum visit for four people. 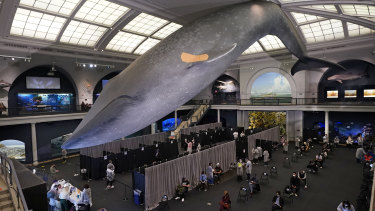 The American Museum of Natural History has turned into a mass vaccination site.Credit:AP

Other states are using casinos and airports as mass vaccination sites.

Polls show that evangelical Christians are among the most resistant Americans to getting vaccinated. Rather than freebies, attempts to boost vaccination rates among evangelicals have focussed on education campaigns that seek to turn religious leaders into vaccine champions.

A group called Christians and the Vaccine provides a toolkit for pastors to address common doubts that members of their congregations may have. Videos on the group’s website use Bible verses to answer questions such as “Is the COVID vaccine a form of government control?“, “Should pro-lifers be pro-vaccine?” and “How can Christians spot fake news on the vaccine?”

Businesses are also taking up the challenge. Krispy Kreme has offered free doughnut to anyone who presents a vaccination certificate, while Budweiser is offering a debit card that can be redeemed for a free beer.

A marijuana dispensary in Michigan, Greenhouse of Walled Lake, is running a “pot for shots” program that offers free pre-rolled joints to vaccinated individuals.

Peter Hotez, Dean of Baylor College’s school of tropical medicine, told CNBC this week he found it jarring that such schemes were necessary to convince Americans to get inoculated.

“When people are clamouring for vaccines in India and in Brazil, it just makes us look like a nation of sulky adolescents,” Hotez said. “So if it’s absolutely necessary, sure, although it’s tough to swallow.”

as, beer, free, offered, Us, vaccin
You may also like:

Who voted against Obamacare in the Supreme Court?

Meghan Markle and Prince Harry paid a staggering £486,000 per MINUTE for Spotify episode