Follow
Home » World News » From academia to animal shelter: Keeping poverty from the door during COVID

From academia to animal shelter: Keeping poverty from the door during COVID

After eight years of casual work, academic and single mother Jennie Jeppesen was in a tenuous position. Now, in the wake of COVID-19, her future is bleaker still. “Because of the pandemic, my career is probably over,” says the 41-year-old. 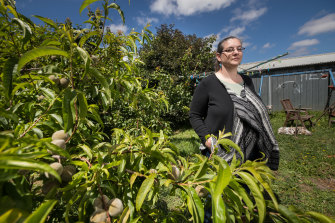 Like many sessional university teachers, she has been a casual, mostly at Melbourne University, though sometimes at Deakin in her hometown of Geelong. Jeppesen is an expert in American and Australian history specialising in convict transportation, race and racism, and always knew being an academic could be a struggle.

“I never expected to get rich from it,” says Jeppesen, who would gladly take a teaching job that paid a pittance if it meant a permanent position.

Now, coronavirus having wiped out more than 6000 jobs, and potentially up to 9000 jobs, across universities in Victoria, to help pay the bills she works a few hours here and there at a local animal shelter she volunteers at. Jeppesen loves cats.

The meagre pay supplements the carers’ allowance she qualifies for because of her eight-year-old son’s autism. But it’s rarely enough for the single mother to keep poverty far from the door. “The animal shelter is my side gig to put money on the table.”

Briefly, early on in the pandemic as Prime Minister Scott Morrison acknowledged the scale of the shock about to hit Australia and JobSeeker was doubled, she ended up on that payment.

“I bought food that I hadn’t had in ages. I was able to buy brand new clothes for the first time in forever.”

Jeppesen was hardly alone – all over Australia, those on or below the poverty line before the pandemic and on JobSeeker suddenly found they could afford the basics many take for granted.

“Their situation improved massively,” says Conny Lenneberg from the Brotherhood of St Laurence. “You could put three nutritious meals on the table a day, we could buy fresh food, we could pay our utility bills, and we could pay to have the car fixed.”

But between February and October, there was a massive 13 per cent decline in employment for women. It meant, Lenneberg says, that many women would be “forever on that hamster wheel cobbling together two or three jobs. Many of them never get to the point where they can build confidently for the future”.

Jeppesen’s son has intense therapy needs, while her 12-year-old daughter is dyslexic.

“I’ve never been able to afford tutoring. There is no funding for that,” says Jeppesen, who for most of her time as a university teacher was also on a single-parent pension – but when her youngest turned eight she was moved onto JobSeeker.

Because of her son’s autism she now qualifies for carers’ payments.

She regards herself as luckier than most because she is paying off a mortgage. It means eviction can’t be added to the pandemic’s other hardships. With extremely careful money management she squeaks by.

“But it’s a struggle to live. My kids have never gone on holiday. We don’t go away for Christmas. I bought jeans this year for the first time in six or seven years. The children have ill-fitting clothing because I can’t afford new things. We don’t have treats or go out to films.”

Jeppesen is a talented gardener and times her planting carefully so there’s ripe fruit or vegetables. “Often if it’s not in the backyard, we don’t get to eat it.”

Jeppesen says her daughter has grown up with little money – “We’ve been poor her whole life” – and as a result is scared of spending anything. “She was given some birthday money, and it’s been a year and she still hasn’t spent it.”

Jeppesen is among more than 17,000 academics nationally who will lose work in the wake of the pandemic, as universities hit by the collapse in international student numbers cut loose any employees they can.

“The higher education sector is being decimated daily. Most of these job losses could have been prevented if universities were able to access JobKeeper,” says Alison Barnes from the National Tertiary Education Union.

Several of Jeppesen’s students wrote a letter about her that was posted on a popular university Facebook page, with one nominating her “hands down the best lecturer I’ve had at this university”.

For now, she will go on volunteering at Geelong Animal Welfare Shelter, picking up the occasional paid shift here and there. “I do a lot of work during kitten season.”

academia, animal, from, Shelte, to
You may also like: