The state opposition has suggested the parliament may need to look at a 12-month moratorium on retiring ministers entering high paying jobs when they still have a deep understanding of government pressure points following the appointment.

Their warning came as Rio Tinto announced that just days after former West Australian treasurer Ben Wyatt joined Woodside’s board, he has joined them as a non-executive director too. 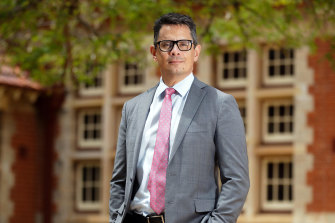 Ben Wyatt has been hot property since leaving politics.Credit:Trevor Collens

Mr Wyatt stands to earn more than $470,000 combined through his roles at Woodside and Rio Tinto.

The company said Mr Wyatt, who will join the board in September, brought extensive public policy, regulatory and international trade experience from his time as treasurer and Aboriginal affairs minister in WA.

“With family links to the Pilbara and an impressive track record in public life, Ben’s knowledge of public policy, finance, international trade and Indigenous affairs will significantly add to the depth of knowledge on the Board at a time when we are seeking to strengthen relationships with key stakeholders in Australia and around the world,” Rio Tinto chairman Simon Thompson said.

Mr Wyatt said he had been deeply saddened and disappointed by the destruction of the Juukan Gorge by the company.

“But I am convinced that Rio Tinto is committed to changing its approach to cultural heritage issues and restoring its reputation, particularly in Australia and Western Australia,” he said.

“I am looking forward to working with the Board in building on the momentum for change generated by the new leadership team.”

The appointment comes as the state government prepares to introduce the revised Aboriginal Heritage Act – which Mr Wyatt helped draft as the responsible minister – for debate.

Opposition government accountability spokesman Vince Catania said it may be prudent to debate whether ministers should be blocked from certain roles for a year after retiring.

“Parliament needs to look at having a 12-month moratorium on retiring government ministers who move into high paying jobs that have still got a huge amount of information on what government is doing and what those pressure points are, what the direction the government is heading in, all valuable knowledge for a company,” he said.

Mr Catania said such a change would also warrant remunerating those retired politicians for the 12 months after they left parliament so they could still put food on the table.

Greens MP Brad Pettitt has gone further than the opposition and suggested a two-year waiting period for senior government officials and staff wanting to go into industry groups.

“I appreciate that Perth is a small town and that it can be hard to find local expertise, but problematic conflicts of interest [may] emerge when former government ministers take positions on major corporates in our community, and it needs to be managed,” he said.

“In New South Wales former ministers are required to take a mandatory two-year break before working for any organisations involved in major planning and development issues.

“In Canada, public officials must wait five years before they can work on behalf of a corporation that frequently lobbies government.

“If the community is to feel confident that decisions are genuinely being made in the interest of people and our planet, then WA must also establish a reasonable waiting period between holding office and moving into senior positions in industry.”

Mr Wyatt received $117,402 in “transitional allowance” for his time in parliament when he retired from politics.

Mr Wyatt isn’t the only former parliamentarian who retired at the election to move into the business sector as fellow former treasurer Dean Nalder picked up a job in corporate affairs for Gina Rinehart’s Hancock Prospecting.

Mr Wyatt has also taken board positions with the AFL’s West Coast Eagles and the Telethon Kids Institute.

He has been a sought-after individual following his political retirement and even prior to pulling up stumps on a 15-year parliamentary career in which he was once touted as a future premier.

Mr Wyatt has a master’s degree from the London School of Economics and worked as a lawyer.