From LA riots to justice for George Floyd: America’s reckoning with race

Washington: Twenty years later, Jud Kilgore still can’t get the video out of his mind.

In March 1991 Rodney King – a black man on parole for robbery – led police on a high-speed chase through Los Angeles.

The police officers eventually stopped him and ordered King out of the car. A group of officers proceeded to kick the 25-year old repeatedly and club him with batons for around 15 minutes as set of colleagues watched on. The beating left King with a fractured skull, broken bones and permanent brain damage.

A bystander with a home video camera filmed the assault. The tape horrified Kilgore, who was then in his early 30s and living in Los Angeles, when it was aired on television.

“I still have images of that in my head,” he says.

To viewers around the world, the police officers’ behaviour appeared indefensible. But when four officers were charged with excessive force, three were acquitted and a jury could not reach a verdict on the fourth.

Within hours, Los Angeles erupted into riots that left 63 people dead, thousands injured and caused over $1 billion in property damage.

“It was a terrifying time in the city,” Kilgore remembers.

The 52-year old bartender now lives in Minneapolis with his Australian-born wife Katrina Mitchell and 10-year old daughter Luna. After trading the California coast for Midwestern Minnesota, Kilgore again found himself living at the centre of a national maelstrom over race and policing last May.

“Officers were able to get the suspect into handcuffs and noted he appeared to be suffering medical distress,” the report said. “Officers called for an ambulance. He was transported to Hennepin County Medical Center by ambulance where he died a short time later.” 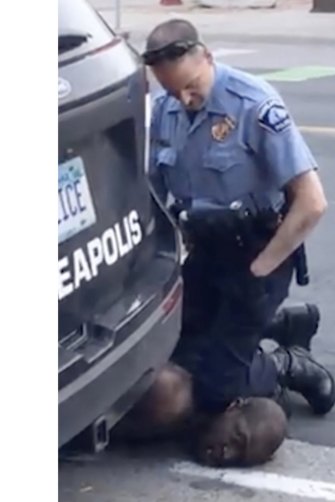 In this frame from video provided by Darnella Frazier, then-Minneapolis Police Officer Derek Chauvin kneels on the neck of George Floyd.Credit:Darnella Frazier

It was only because 17-year old Darnella Frazier filmed the incident on her phone that the world learnt what really happened. Floyd had, in fact, died after Derek Chauvin, a white police police officer, pressed his knee into the black man’s neck for almost ten minutes.

Just like Los Angeles in 1992, Minneapolis descended into rioting: a police station was set ablaze, businesses across the city were ransacked.

It seemed like history was repeating itself. The only question was whether there would be a different outcome when a 12-person jury met this week to decide Chauvin’s guilt or innocence.

Samuel Myers Jr, a professor in the University of Minnesota’s school of public affairs, calls it the “Minnesota paradox”. The term describes how Minnesota is simultaneously one of the most progressive states in the country, as well as one the worst places for a black person to live.

“African Americans are worse off in Minnesota than they are in virtually every other state in the nation,” Myers wrote last year, pointing to enormous racial gaps in wages, employment rates, home ownership levels, incarceration rates and school test scores. 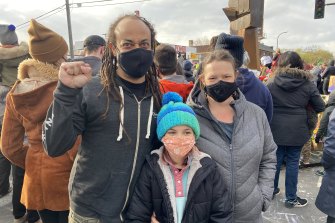 After living in the state’s biggest city for 11 years, Kilgore puts it this way: “Minneapolis is a great city to live in if you’re white.”

He says he was shocked when, only days moving into a new home in Minneapolis, a suspicious white neighbour called the police on him for walking down the street.

Others were far more dubious.

“I don’t feel hopeful we will get justice,” Paul Johnson, a black man who used to regularly shop at the grocery store where Floyd was killed, said as the jury began its deliberations.

Thousands of National Guard troops had been called into Minneapolis and businesses across the city were boarded up, in anticipation of riots following an acquittal.

Minnesota Governor Tim Walz this week said there had been vastly different expectations in his state about the trial outcome. White people were far more confident of a guilty verdict while black Minnesotans feared Chauvin would walk free. 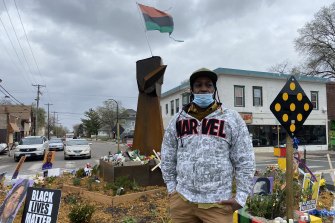 Minneapolis man Paul Johnson was not optimists before the verdict was handed down. Credit:Matthew Knott

Adriane Lentz-Smith, an expert in African American history at Duke University, explains: “Black people have a pessimism born of experience while white people have faith in a system that has, by and large, served them well.”

She also draws a connection between Floyd’s death and the beating of Rodney King. “There was video, we all saw it, and yet those officers were acquitted. If that was possible then, there was nothing to guarantee it wasn’t possible now.”

There were even more recent parallels to give people pause.

In 2014 black man Eric Garner died on New York’s Staten Island after a police officer held him in a prohibited choke-hold. Before dying, Garner exclaimed “I can’t breathe” 11 times. A grand jury decided not to bring charges against the officer.

Two years later black man Philando Castile died just outside Minneapolis when a police officer shot him during a traffic stop. The officer was charged with second-degree manslaughter and two counts of dangerous discharge of a firearm. After five days of deliberation, a jury acquitted the officer of all charges. 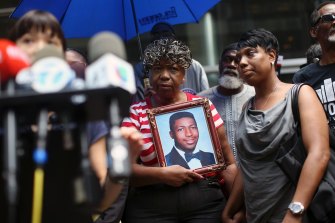 Gwen Carr, mother of Eric Garner, who died after a police officer used a choke hold to subdue him in 2014 in New York.Credit:The New York Times

This time it was different. After 10 hours of deliberations the jury returned with its verdict: Chauvin was guilty on all three charges. Prosecutors are seeking an aggravated sentence, meaning the former police officer may spend 40 years in prison.

Outside the Minneapolis court house there were cheers, hugs and tears when the verdict was read aloud. “All three counts!” people chanted.

Hundreds of Minneapolis residents flocked to George Floyd Square, the intersection where Floyd died. It was chilly, but the sun was shining. “My heart feels good!” a woman shouted as a brass band played When the Saints Go Marching In.

“This could have turned out the wrong way but something went right,” Jud Kilgore said, standing beside his wife and daughter. “I wanted to celebrate that.”

“I was shocked,” said Minneapolis resident Derin Rowe, who is black. “I thought the guy was going to get off.”

The pent-up tension in the city quickly begins to subside.

“The guilty verdict is not enough but it’s a necessary precondition for people to have faith that the system can work.” 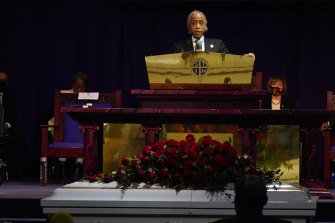 Reverend Al Sharpton delivering the eulogy at the funeral of Daunte Wright, who was also shot dead by Minnesota police. Credit:AP

But Republican Senator Tim Scott has expressed optimism he can reach a deal with Democrats on police reform in coming weeks. He has suggested a compromise that would allow victims of police mistreatment to sue police departments rather than officers themselves.

A reminder of the challenges Minnesota – and the country – still faces came just two days after the Chauvin verdict was handed down. A twenty minute drive from George Floyd Square, the family of 20-year old black man Daunte Wright gathered for his funeral service.

Wright died in suburban Minneapolis on April 11 after being shot by police officer Kim Potter during a traffic stop. Potter has said she intended to taser Wright but accidentally shot him instead. She has been charged with second-degree manslaughter.

The National Guard troops are now preparing to leave Minneapolis. The plywood boards are starting to come down from the store-fronts. Chauvin is in a maximum security prison, awaiting sentencing. But the deep-rooted issues his trial exposed haven’t gone away.