Addis Ababa, Ethiopia — As war raged in northern Ethiopia and the region barrelled toward its worst famine in decades, a senior US envoy flew to the Ethiopian capital last month in the hope of persuading Prime Minister Abiy Ahmed to pull his country out of a destructive spiral that many fear is tearing it apart.

Abiy, though, wanted to go for a drive.

Taking the wheel, the Ethiopian leader took his American guest, the Biden administration’s Horn of Africa envoy, Jeffrey Feltman, on an impromptu four-hour tour of Addis Ababa, US officials said. The Prime Minister drove him past smart new city parks and a refurbished central plaza and even crashed a wedding where the two men posed for photos with the bride and groom. 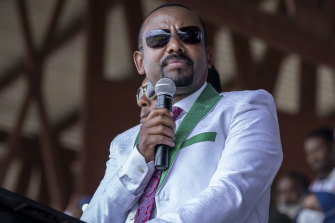 Ethiopian Prime Minister Abiy Ahmed speaks at a final campaign rally in the town of Jimma, Oromia, on MondayCredit:AP

Abiy’s attempt to change the channel, showcasing economic progress while parts of his country burnt, was just the latest sign of a troubled trajectory that has baffled international observers who wonder how they got him so wrong.

Not long ago, Abiy, whose country voted in long-delayed parliamentary elections on Monday, was a shining hope for the country and continent. After coming to power in 2018, he embarked on a whirlwind of ambitious reforms: freeing political prisoners, welcoming exiles home from abroad and, most impressively, striking a landmark peace deal with Eritrea, Ethiopia’s old foe, in a matter of months.

The West, eager for a glittering success story in Africa, was wowed, and within 18 months Abiy, a onetime intelligence officer, had been awarded the Nobel Peace Prize. 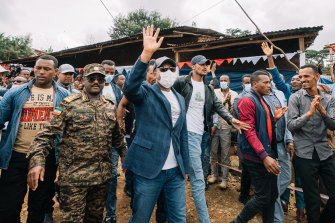 Ethiopian Prime Minister Abiy Ahmed walks to a polling location to cast his vote in the country’s national election at his home town of Beshasha.Credit:OPM/Getty Images

But in just nine months, Abiy’s halo has been shattered. The civil war that erupted in the northern region of Tigray in November has become a byword for atrocities against Ethiopian citizens.

Abiy’s forces have been accused of massacres, sexual assault and ethnic cleansing. This month, a senior United Nations official declared that Tigray was in the throes of a famine — the world’s worst since 250,000 people died in Somalia a decade ago, he said.

Elsewhere in Ethiopia, ethnic violence has killed hundreds and forced 2 million people to flee their homes. A smouldering border dispute with Sudan has flared into a major military stand-off.

Even this election, once billed as the country’s first free vote and a chance to turn the page on decades of autocratic rule, has only highlighted its divisions and fulled grim warnings its future is in doubt. 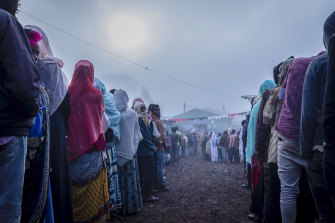 Ethiopians queue in the early morning to cast their votes in the general election in Beshasha on Monday.Credit:AP

Authorities were unable to hold elections in four of 10 regions because of opposition boycotts, war, civil unrest and logistical failures. In two of the regions that did vote, opposition observers were reportedly chased away from many polling stations, she said.

“This will jeopardise the credibility of the election process,” warned election board chief Birtukan Midekssa.

Abiy’s newly formed national Prosperity Party is widely expected to win easily, as it faces a fragmented opposition of dozens of mostly ethnically-based parties. Currently the ruling coalition and its allies hold all 547 national parliamentary seats.

“I hope it will be the best election in history,” Abiy said after voting. 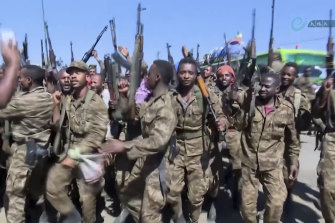 Ethiopian military celebrate near the border of the Tigray region after PM Abiy Ahmed ordered a “final and crucial” military operation against the region’s leadership.Credit:AP

A credible poll would burnish his international image, but observers have doubts.

“These elections are a distraction,” said Abadir Ibrahim, an adjunct law professor at Addis Ababa University. “The state is on a cliff edge, and it’s not clear if it can pull back. We just need to get past this vote so we can focus on averting a calamity.”

The Prime Minister’s office did not respond to questions and an interview request. Official results are not expected for days.

Abiy has put a brave face on his nation’s problems, repeatedly downplaying the Tigray conflict as a “law and order operation” and pushing his vision for a modernised, economically vibrant Ethiopia. The United States, which gave Ethiopia $US1 billion ($1.3 million) in aid last year, is pressuring him to shift focus immediately. 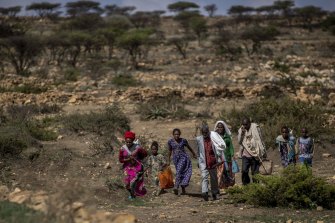 People walk from a rural area to a charity food distribution point near the town of Agula, in the Tigray region of northern Ethiopia, last month.Credit:AP

After being chauffeured around Addis Ababa by Abiy in May, Feltman wrote a detailed analysis of his trip for President Joe Biden and other leaders in Washington, even mentioning a sudden jolt by the vehicle that sent coffee spilling on the envoy’s shirt.

Global condemnation of Abiy, 44, most recently at last week’s G7 summit, represents a dizzying fall for a young leader who until recently was globally celebrated.

The whirl of reforms he instituted after being appointed prime minister in 2018 were a sharp rebuke to the Tigray People’s Liberation Front, a party of rebels turned rulers who had dominated Ethiopia since 1991 in an authoritarian system that achieved impressive economic growth at the cost of basic civil rights.

Abiy promised a new way. He allowed once-banned opposition parties, appointed women to half the positions in his cabinet and struck the peace with Eritrea that earned him a Nobel Prize.

But in moving swiftly, Abiy also unleashed pent-up frustrations among ethnic groups that had been marginalised from power for decades — most notably his own group, the Oromo, who account for one-third of Ethiopia’s 110 million people. When mass protests erupted, he reverted to the old playbook: arrests, repression and police brutality.

At the same time, tensions escalated with the TPLF, which resented Abiy’s reforms. The party leadership retreated to Tigray where, last September, it defied Abiy by proceeding with regional elections that had been postponed across the country because of the pandemic.

By early last November, word reached Washington that war was looming in Tigray. Senator Chris Coons, who has a long-standing interest in Africa, phoned Abiy to warn about the perils of resorting to military force.

The Democrat said he reminded the Ethiopian leader that the American Civil War and World War I had started with promises of swift military victory, only to drag on for years and cost millions of lives.

Abiy was undeterred. “He was confident it would be over in six weeks,” Coons said. Days later, on the evening of the US presidential election, fighting erupted in Tigray.

Abiy has given few interviews. People who have dealt with him describe a man brimming with confidence, even “messianic”, a description encouraged by his own accounts that his ascent was preordained. When he was 7, Abiy told The New York Times in 2018, his mother whispered into his ear that he was “unique” and predicted that he would “end up in the palace.”

A former adviser said that a strong Christian faith guides him. He is a Pentecostal Christian, a faith that has soared in popularity in Ethiopia, and is a staunch believer in the “prosperity gospel” — a theology that regards material success as God’s reward — said the former adviser, who spoke on the condition of anonymity to avoid reprisals. It is not a coincidence, the adviser added, that the party he founded is called the Prosperity Party.

Abiy’s evangelical faith has attracted supporters in Washington, including Republican Senator James Inhofe, who told the US Senate in 2018 how he first met Abiy at a prayer meeting where “he told the story of his journey and faith in Jesus.”

Last month, Inhofe travelled to Ethiopia to show his support for Abiy against US sanctions.

Another crucial relationship for Abiy is with the dictatorial leader of Eritrea, Isaias Afwerki. Eritrean troops who flooded into Tigray to support Abiy’s campaign have been accused by the UN and rights groups of the worst atrocities of the conflict. Now they are a major factor in the region’s famine.

The Eritrean issue is Abiy’s largest international liability, and some analysts describe him as being manipulated by Isaias, a veteran fighter with a reputation for ruthless strategic manoeuvring. By other accounts, Abiy has little choice: were the Eritreans to leave suddenly, he could lose control of Tigray entirely.

The election is likely to highlight the mounting challenges in the rest of Ethiopia. In the past month alone, 400,000 people have been forced from their homes in the Amhara and Afar regions, Lowcock said. The military has taken control in several parts of Oromia, where an armed rebellion has erupted.

Coons, sent by Biden to reason with Abiy in February, warned the Ethiopian leader that the explosion of ethnic hatred could shatter the country, much as it did the former Yugoslavia during the 1990s.

Abiy responded that Ethiopia is “a great nation with a great history,” Coons said.

Abiy’s transformation from Nobel Peace laureate to wartime leader has spurred quiet soul-searching among some of his allies. The Nobel’s glitter, and a desire for a success story in Africa, blinded many Western countries to his evident faults, said Judd Devermont, a former US national intelligence officer for Africa, now at the Centre for Strategic and International Studies.

With limited interest in Africa, the West too readily categorises the continent’s leaders as “good” or “bad” with little room for nuance, he added.

“We have to acknowledge that we helped to contribute to Abiy’s view of himself,” he said. “We papered over these challenges very early. We gave him a blank cheque. When it went wrong, we initially turned a blind eye. And now it may be too late.”