Follow
Home » World News » From Obama To Omeretta, Here's How Georgia Is Rallying Its Voters

From Obama To Omeretta, Here's How Georgia Is Rallying Its Voters

Former President Barack Obama is making several stops around the country to rally voters for the midterm elections, including an appearance with Stacey Abrams and Raphael Warnock in Georgia on Friday.

Besides the Abrams rally, other organizers, like the groups behind the Votelanta Music Festival, are coming up with creative ways to increase voter engagement in the critical midterm elections. 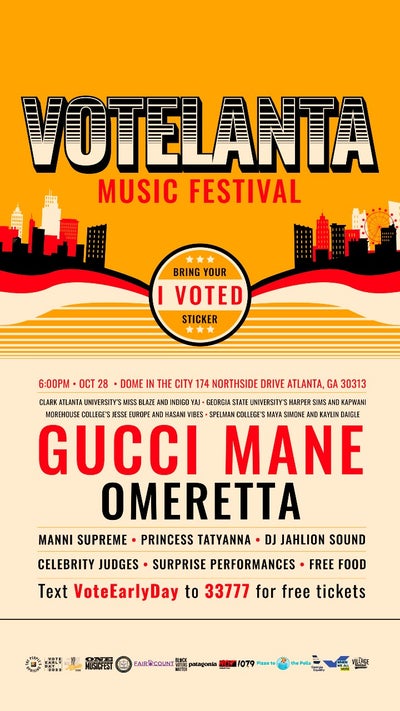 Friday’s Votelanta Music Festival will feature headline performances by Atlanta natives Gucci Mane and Omeretta (who will let you know what’s NOT Atlanta).

Among the sponsors of the event is Pizza to the Polls which will provide free pizza for attendees. Staying on-theme for homecoming season, students from Georgia State University, Clark Atlanta University, Spelman College, Morehouse College and Morris Brown College are scheduled to compete in a “battle of the bands” at the event.

As Pizza to the Polls Executive Director, Amirah Norman, said in 2020 during the hotly contested presidential and Senate races, “Supporting all elections, from the primary to special senate run-offs, and being able to feed people safely as they perform their civic duty is the very essence of our organization.”

The group is also joined by The People’s Uprising, which was formed in the aftermath of the George Floyd uprisings against police violence.

On another side of town, Obama will join Georgia Democrats to mobilize the state, where Senator Raphael Warnock is working to defend his Senate seat from challenger Herschel Walker. The Atlanta pastor is among the many Black candidates campaigning to maintain the Democrats’ majority in the Senate.

Ahead of his appearance in Georgia, Obama noted the urgency of the midterm elections in a video message, stating that “the power to protect reproductive rights and codify Roe is in our hands, we just have to use it.”

The lines may reflect the level of enthusiasm that’s already in The Peach State. Reports show that early voting in 2022 is up 159% compared to the same period in 2018. A record-breaking 1 million voters have already gone to the polls before the Nov. 8 election day.