On 22 April 1887, a cyclone struck the pearling fleet at Ninety Mile Beach near Broome claiming 140 lives. The storm was unexpected, as it was late into the season, so the fleet had very little warning of the approaching danger.

THE DESTRUCTION OF THE PEARLING FLEET

PERTH, FRIDAY – The S.S. Australind, which has been engaged by the Government, left Cossack at 5 o’clock this morning for the purpose of cruising for dismantled pearling boats. Ninety-mile Beach, where the fleet was stationed, is situated, about 200 miles north of Cossack. There are no means of communication existing, except by sea: consequently details of the disaster are slow in coming to hand. Several private telegrams have been received which confirm the news of the catastrophe, all placing the loss of life at about 500. Thirty-five bodes have been picked up. 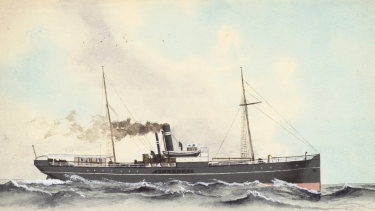 The S.S. Australind sent to look for survivors of the pearling fleet.

Captain Redden, of the schooner Ethel, which has arrived at Cossack, reports as follows:—“On 27th April we experienced a heavy hurricane, for the space of 12 hours, off Roebuck Bay. We lost two ship’s boats and a large quantity of deck cargo. We had also in company three luggers, with six men on each, for the pearling grounds. We parted company during the gale, and I believe all are lost. I think all the Ninety-mile beach pearling fleet must be lost.”

When the hurricane struck the pearling fleet several boats made for Gourdon Bay, at the north end of Ninety-mile Beach, for shelter, and a number reached there. Amongst the boats missing are the following: Venture, Lady Loftus and several luggers, Dairy Maid and 6 loggers, 3 luggers belonging to the Mairs, 1 lugger belonging to the Lady Denison, 3 luggers belonging to the Herald, 1 lugger belonging to Annie, the Osprey and 1 lugger. Several other luggers are also known to be lost. Of the West Australian boats, the Expert, Dawn, Myra, Jessie, Water Lily, Gipsy and Harriet are all lost or missing. The Dawn had 30 tons of shell on board.

Very little hope is now entertained of finding more boats, although the Australind is out searching. It is supposed, if the boats had been driven to sea, they must be in the neighborhood of Scott’s Reef, in a north-westerly direction.

The steamer Otway, passing the scene of the disaster today, may find survivors. Telegrams to hand today state that the survivors believe more than 40 boats sunk, with altogether 500 souls.

A telegram received this evening states that the pearling fleet had no warning of the hurricane. The barometer was falling only slightly. Captain Mayne, one of the survivors, was blinded by lightning two days before the catastrophe. Captain French is among those drowned.

There is no fresh information tonight regarding the disaster, and none is expected until the arrival of the Australind. The West Australian vessels used native divers, having from 40 to 80 men on board. The other vessels used divers in diving dresses. The fishers worked from luggers, the chief vessel acting as a store ship.

A telegram to hand late tonight from Roebourne states that the accounts are most conflicting in detail, but all show the hurricane was most disastrous. The estimate of the number of lives lost varies from 400 to 550, the majority being Malays and Aboriginal divers.