From the Archives, 1932: The Great Emu War begins

Campion (W.A.) Thursday – The Lewis gunners in the Campion district appear to be on a wild emu chase. The country has echoed to the sound of gunfire, but the ranks of the emus, which are estimated at about 10,000, have not been seriously affected. The first day’s operations saw the enemy suffer only a dozen or so deaths, although many appear to be wounded. 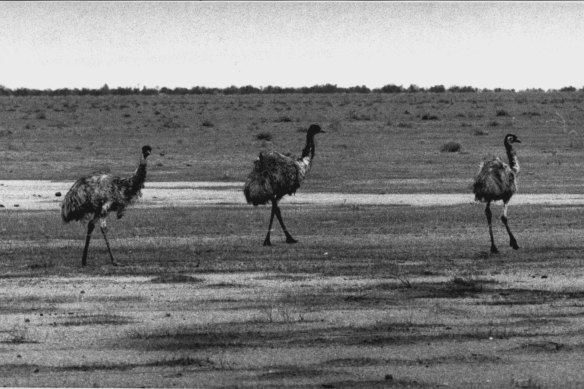 A mob of emus.Credit:Michele Mossop

Two days ago the birds were in flocks of hundreds, but the Lewis gunners have so far not had a target of more than thirty or forty in a group, nor a range of less than half a mile. Even when the party waited in ambush at sunset for the emus to come and drink they waited in vain.

A group of about thirty appeared about a mile away, and 150 rounds were fired at them from two guns, but no birds were killed outright, although some were evidently hit.

The settlers show the greatest interest in the gunners’ activities, and nine cars today followed the lorry on which the Lewis guns were mounted.

In future the number of the attacked the attacking party will be reduced, and attention will be paid to small holdings. 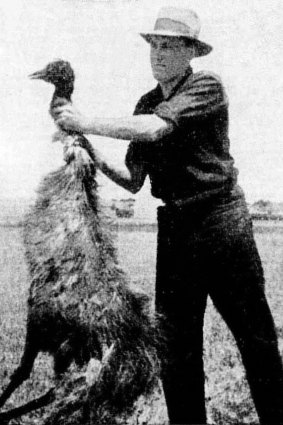 One of the birds shot by the machine-gun party.Credit:The Land, via Trove

Campion, Saturday – The little district of Campion, about 200 miles from Perth, has been sent in to a furore of excitement during the past few days by a war which is being waged against an invasion of emus.

Last Wednesday a motor truck arrived in Campion, which consists of a railway siding and store. The truck carried two Lewis guns, in charge of Major D. W. P. Meredith, commanding officer of the Seventh heavy Battery of the Royal Australian Artillery; Sergeant S. McMurray and Gunner J. O’Halloran, and also settlers who had turned out to greet the party dispatched by the Defence department to check the advance of the birds, which have already cost the settler thousands of pounds, and threaten to cost them thousands more.

In the middle of last month a decision was made to send Lewis gunners to conduct an offensive that is probably unique in its nature. For the last few days Campion has echoed to the rat-tat of the Lewis guns, but the honours have been with the pursued.

Birds which a month ago strolled nonchalantly and disdainfully over crops, and could be easily run down along the rabbit-proof fence in cars, and even boys on bicycles, have become very timid, and Major Meredith and his men have had to be content with a range of 1000 yards at the birds, which are revealing extraordinary invulnerability. Few of the emus have fallen to the fire of the guns.

The emus waste no time in moving off the mark at the first burst from the guns. They are capable of maintaining a speed of nearly 40 miles an hour for mile after mile, and motorists who have chased them assert that they have seen them fleeing at 55 miles an hour.

In consequence the gunners are up against a tough proposition. The settlers have to guarantee payment for the ammunition at the rate of £50 for 10,000 rounds. Some resent the charge, asserting that the stock being used is now obsolete.

The birds are now scattered throughout the district, and the gunners have found that their only hope of making a kill is to lie in ambush overnight at the drinking places and await the birds, which come with the dawn. In this way large numbers are being accounted for.

END OF THE EMU WAR

Perth, Wednesday – The Lewis gunners campaign against the emus in the Campion district has been ended at the orders of the Defence department.

A message was received today by the State Commandant (Brigadier A. M. Martyn) instructing him to withdraw the gunners operating in that district, and this has been done.

Mr G. Lambert, M.L.A., secretary of the State Labor Opposition, who arranged with the Minister of Defence for the dispatch of the Lewis gunners to Campion, expressed keen disappointment at the decision. Mr Lambert said the interruption of the campaign was made all the more unexpected and irritating by the fact that on Saturday he telegraphed Major Meredith, who has charge of the Campion party, asking him if the infestation in that district would justify an extension of the operations to Walggolan. Major Meredith had replied that they would.

The farmers were perturbed at the decision of the Minister of Defence. He has received a telegram from the representative stating that it was imperative that the gunners should stay as emus were beginning to appear in large numbers.

A message has been received from Campion that the military party will head for Perth by the Kalgoorlie express which will pass through Burracoppin tonight.

On November 13, 1932, just days after the Lewis Gunners were withdrawn, hostilities resumed between Major Meredith’s forces and W.A.’s emu population. The second phase of the conflict lasted until December 10, 1932, when Meredith’s forces were once again withdrawn.