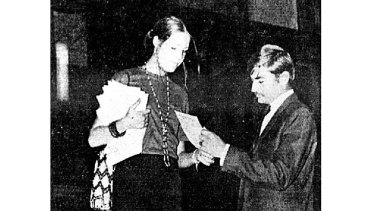 Quick to take advantage of the Council decision to allow pamphlets to be distributed is Suzy Jones, a member of the Young Labor Association. Credit:Age photographer

The City council decided yesterday to permit distribution of pamphlets in city streets.

It voted unanimously to repeal a clause of its 80-year-old by-law 418 banning pamphlets.

The decision was made less than a week after the general purposes committee, which administers the by-law, agreed not to change the law. The vote ended one of the most bitter attacks on the Council in recent times.

The committee chairman (Sir Maurice Nathan) seconded a motion by the Labor leader (Cr. K. Holland) to repeal the clause 24 (1) from by-law 418. The motion was carried on a show of hands.

Sir Maurice said he changed his mind about the by-law on Monday morning after considering press statements, talking to ratepayers and receiving counsel from “eminent authorities”.

“I am now convinced, and the majority of the committee agrees, that our approach to the by-law previously was far too narrow,” he said.

“It is now obvious to me that this by-law, whatever its intent, hits at the fundamental right of citizens to speak and express themselves freely.”

The provisions of the by-law will not be enforced in the time taken for it to be repealed — probably about 10 weeks.

Prosecutions already launched against people for infringing it will be withdrawn.

About 15 people sat silently in the Public gallery to hear the debate. They included student leader Harry van Moorst and the secretary of the Save Our Sons movement (Mrs. Jean McLean). 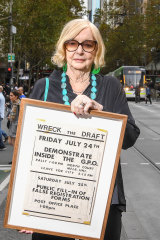 Jean McLean, convener of the Save Our Sons movement, holding a flyer promoting a rally and an event to fill-in false registration forms for National Service.Credit:Justin McManus

Unprecedented security measures were taken before the meeting. Council traffic inspectors and police stood at every entrance to the building.

At least 70 people have appeared in court for distributing pamphlets attacking conscription, Australia’s involvement in the Vietnam war and the by-law itself.

Three students were gaoled for non-payment of fines imposed for distributing anti-national service leaflets in the city.

Federal Labor MHR Dr. Jim Cairns, arrested last Thursday for handing out leaflets outside the Town Hall, said he was prepared under certain circumstances, to go to gaol rather than pay a fine for infringing the by-law.

Last night he still had not received a summons.

On the same day, 27 rebel unions decided to ask unionists not to buy Courage beer or shop at Patersons (Australia) Pty. Ltd.

It decided to take this action because Sir Maurice, who is chairman of both firms, asked police and council officers to enforce the by-law.

Sir Maurice said he had found that council traffic officers had been exposed to venom, contempt and insults from the public for enforcing the by-law.

“It has lowered morale because these officers believe they are doing the work of others.

“It seems the police are armed with adequate powers to deal with obstruction,” he said.

He said that when the general purposes committee last discussed the by-law it considered only whether the law should be enforced.

The committee considered it was not the council’s function to deal with moral or social issues.

“This is the function of the State or Commonwealth,” he said.

Sir Maurice said the council was being looked on by the public as “top-hatted, frock-coated, striped-pants business idiots.”

He believed the council should no longer be regarded this way.

Cr. Holland said “dissent” was not a dirty word and dissenters were not “degraded, debauched, drop outs from universities under contract to some foreign power.”

Not one responsible person or group had presented a case for retaining the by-law. He could not recall any other incident when this had occurred — during 17 years with the council. 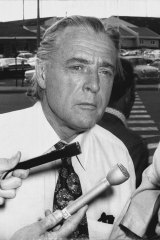 Dr. Cairns said he was “astonished by the council’s change of heart.

“I did not think it was possible. The extent of its reassessment is so great that the council deserves a great deal of credit.

“It has proved the effectiveness of reasonable demonstration, even if it appeared to be unlawful.

“It will convince people that something can be done and that we are not impudent.”

He said he hoped the gaol sentences imposed on young people for infringing the by-law would not prejudice their careers.

Harry van Moorst said he was “elated” by the decision. A large protest was planned for outside the Commonwealth Centre, Spring Street, at which pamphlets would be distributed, he said.

Cr. Ivan Rohrt gave notice that at the next council meeting he would ask the council to take action to have expunged from the record gaol sentences imposed for distributing pamphlets.

He also would ask the council to consider refunding fines imposed.

THEY TOOK OFF TOP HATS 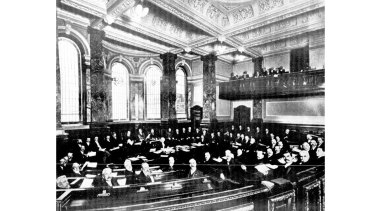 The chamber where the Melbourne City Council deliberates is a fusty, musty place.

A thick, red-patterned carpet deadens voices. The comfy, quilted black leather seats are the sort you find in a gentleman’s club. For quiet meditation and peaceful siestas.

Plaster scrolls writhe their way across the ceiling. The solid Victorian look of the place is strengthened by yards of dark wood panelling and the dull gleam of marble facings.

It is no wonder then, to use the words of Councillor Sir Maurice Nathan, that the inhabitants of this place are regarded by the general public as “top-hatted, frock-coated, striped-suited business idiots.”

But yesterday the inhabitants of this place did a remarkable thing. They admitted they had been wrong.

They repealed an 80-year-old by-law enacted by their top-hatted forbearers to rid the pavements of the City of Melbourne of hawkers, dodger thrusters and pamphleteers.

They admitted they had been wrong in clinging to this law and using their servants to arrest people because now, in the 20th century, these people wanted to exercise their right to dissent by handing out pamphlets.

A breath of fresh air blew through that council chamber yesterday afternoon.

It blew away illusions about top hats and stuffed shirts and revealed a group of middle-aged businessmen who had made a mistake and were game enough to face up to a shareholders’ meeting and admit it.

The shareholders were there to see them. A rough cross-section of the citizens who come to the City of Melbourne to work, to buy, to sell, to use it as their centre.

They looked down from the galleries on the heads below, and they looked, in particular, at Maurice Nathan.

Because he is chairman of the council’s general-purpose committee, which upheld the by-law and enforced it. And he had been the target for abuse and threats of violence.

Now he had the guts to stand up and say that he and his committee had been wrong.

“Perhaps I was naive,” he said. “I did not realise that this would bring on my head such vitriolic attacks.

“I looked at the whole matter during the quiet of Easter. I read all the published material on the subject. I spoke to dozens of people. I consulted eminent authorities.

When he sat down, the gallery applauded him. There were more speeches and fine phrases about the rights of man and democracy before the matter was put to the vote. But it was Maurice Nathan’s speech that made the day.

“The by-law,” he said, “is out of date and we shouldn’t be enforcing it.” And it summed up all the speeches and the thousands of words that were written on the subject.

THE strength of a nation’s commitment to democracy can be judged by the value it places on the free exchange of ideas and opinions. Any needless limitation on such exchanges inevitably weakens democracy because it prevents fully informed decision making by the nation’s ultimate rulers — the people. That is why the citizens of democracies must have an inalienable right to publicly discuss (and sometimes to challenge) the actions taken by their law makers. In a large and complex society, the exercise and preservation of this right is hampered by two unavoidable difficulties. The first is the communications problem which faces an individual who tries to make himself heard above the crowd; the second is society’s reasonable demands for public order and for protection against slander, sedition and treason. In Melbourne, there is a further it problem. Its technical name is City By-law 418 (24) 1.

The by-law says ’“No person shall upon street road or footway or other public place give out or distribute to bystanders or passers-by any handbills, placards, notices, advertisements, books, pamphlets or papers.” Its effect, in recent weeks, has been to place obstacles in the way of citizens seeking to exercise their right to dissent from Government decisions. We make no comment on matters now before Melbourne’s courts. But we are concerned at the use being made of the by-law. No matter how strongly we disagree with the content of pamphlets being handed out, we believe the right to dissent is vital to democracy and should be preserved. It is not the role of a city council to be a political censor.

If the council’s intention is, simply, to discourage unruly behavior and to stop the distribution of seditious literature, it need have no fears. The public is adequately protected against these offences by other laws administered by the State and Commonwealth police. If a protester is behaving in an orderly manner and offering pamphlets which do not breach the nation’s laws against sedition, the council is attacking a vital civil liberty when it takes action against him. An orderly protester — no matter how unpopular his cause – should have the same right to offer pamphlets as passers-by have to refuse them. Any departure from this principle weakens democracy. The City Council can be sure that disorderly protesters will be dealt with by the appropriate law enforcement agencies.

The council’s recent actions under By-law 418 have struck mainly at one group of protesters — those opposed to conscription and to Australia’s involvement in Vietnam. The taint of selectivity is in the air. The demonstrators include many students whose studies are forcing them to compare various political systems. More than other citizens, perhaps, they need to be convinced that democracy is the least-imperfect form of government. By-law 418 is not a shining example. 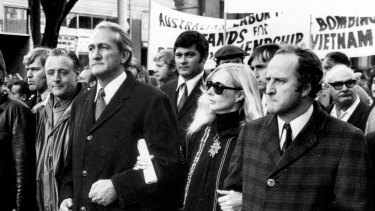