In 1974, record rains flooded Melbourne and swamped vast areas of the state. Houses and highways were inundated and hundreds of people were evacuated as more than three inches of rain fell across most of Victoria.

Many of the areas inundated in that flood are once again under threat.

Record May rains swamped vast areas of Victoria yesterday. Most of the state – except Gippsland – had more than three inches of rain. 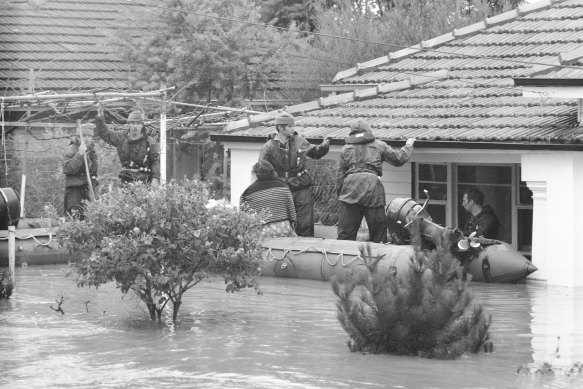 The rain left thousands of square miles of northern and central Victoria underwater. Hundreds of homes were evacuated.

In Melbourne, houses and highways were flooded and traffic was disrupted throughout the day and into the night.

As floodwaters continued to rise: 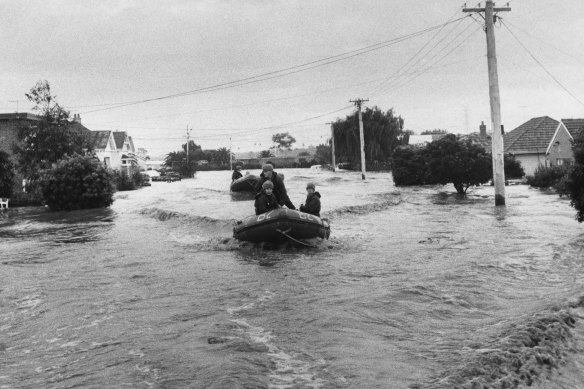 In Wangaratta, residents are preparing to evacuate as floodwaters from the Ovens and King rivers overflow into low-lying land around the town.

Police fear the flood danger in Seymour, Benalla, Wangaratta and Kyabram will increase as run-off from the catchment areas spills into the Goulburn, Broken, Ovens and King rivers and heads south.

At Avenel, 73 miles north of Melbourne, 30 soldiers sandbagged the town. Late last night it was isolated by floodwater from the Goulburn and Hughes Creek. 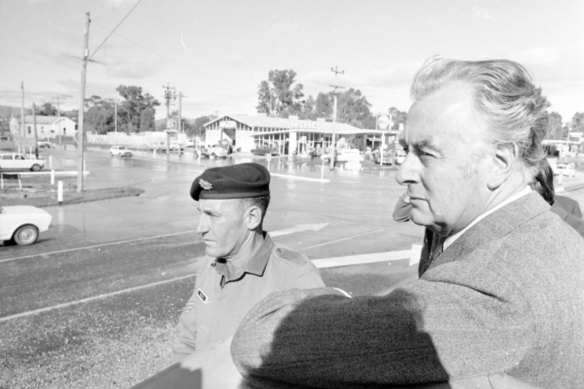 At the height of the floods in Melbourne at 6pm yesterday, a car with two people in it was swept off Heatherton Road in Doveton North into the Dandenong Creek.

An ambulance officer, Bob Spence, said it appeared the car was trying to cross the flooded creek. He said the car went up to its windows in water, but once in the stream could go no further. 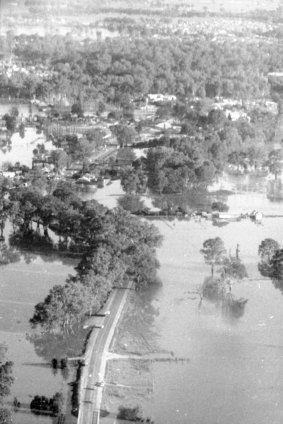 At 3.30pm a man was pulled from the Merri Creek behind Containers Limited in Normanby Road, Northcote.

Ambulance officers revived the man, who was taken to PANCH (Preston & Northcote Community Hospital) for observation and was later allowed to leave.

The RACV emergency road service reported a heavy demand with up to 500 calls an hour for help in the afternoon peak.

Later in the evening the number dropped to around 130 an hour.

At the Containers factory, hundreds of square feet of the basement area were under eight feet of water.

A company spokesman said damage to stock and equipment could total hundreds of thousands of dollars.

Nearby Anderson Road was under six feet of water and the Merri Creek was expected to rise even higher. 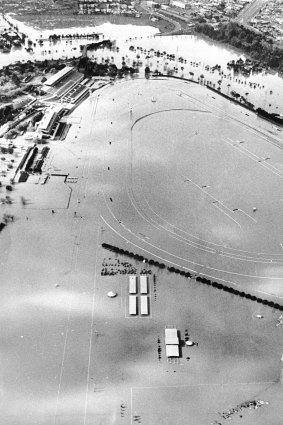 A brigade spokesman said damage would amount to thousands of dollars.

More than a dozen homes in Fyffe Street, Thornbury, which runs into Anderson Road, were under water. Residents were using boats to move their possessions to dry ground.

Eyewitnesses said many people refused to leave their homes until police removed them.

Merri Creek was more than 300 feet wide in places.

The Darebin Creek at Settlement Road, Thomastown, was about 200 feet wide and running swiftly. At least four homes had water inside.

Thousands forced from their homes … the wheat crop devastated … and Flemington Racecourse submerged. That’s part of the toll in Victoria’s worst floods in nearly 60 years. 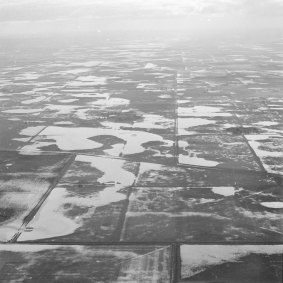 In Shepparton, where a thousand have already been evacuated from homes, the worst is yet to come.

In Wangaratta, another 1000 people have been evacuated from more than 400 flood-damaged houses.

Hundreds more have been rescued from isolated farms and small towns.

And a flash flood in Melbourne’s western suburbs early yesterday forced 200 people in Maribyrnong and Flemington to flee their homes.

A flotilla of army and coast guard boats were called in at 2am. The boats ran a shuttle service from swamped homes to two churches on high ground.

By last night the Maribyrnong River had receded, but many of the 200 evacuated from 60 homes could not go home. Furniture, bedding and food were swept away.

As much as half of Victoria’s wheat crop could be ruined. So far only half the wheat crop has been sown.

And there’s bad news for racegoers. Flemington Racecourse is under four feet of water and black mud.

The Victoria Racing Club’s clubrooms are flooded and the carpet covered in mud. About 200 horses at the course have been re-stabled at the Showgrounds.

Course manager Ron King fears salt in floodwaters could kill off the turf.