Follow
Home » World News » From the Archives, 1986: Millions join the Race Against Time for Africa

From the Archives, 1986: Millions join the Race Against Time for Africa

A flood of relief flows from a sea of runners

As the sea of runners flowed along St Kilda road early yesterday morning, scattering autumn leaves in their wake, one athlete commented on the absence of the tension and shoving often experienced in competitive fun runs. 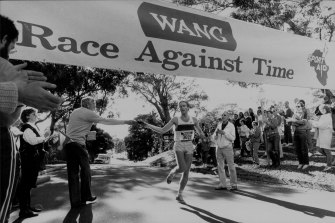 The finish line of the Sydney Race Against Time.Credit:Ian Charles Cugley

Instead, about 3500 people pursued a goal that transcended competitive instincts. In the process, they contributed to an anticipated Australian total of about $1 million for African famine relief.

All Australian capitals jumped the international gun in the Race Against Time for Africa, but in Brisbane a second 10-kilometre run was staged at 1 o’clock this morning to coincide with events in Europe and America.

While it is premature to say whether the organisers’ hope of raising $150 million has been realised, it is not too early to deem Bob GeIdof’s Sport Aid a success. Estimates suggested that more than 20 million people in 266 cities and 76 countries would take part.

On Saturday night, organisers could have been forgiven for thinking that Melbourne was letting them down with only 1400 entries registered. But the crowd gathering at the starting line early yesterday more than doubled this initial figure.

Race winner Mike Hillardt, the Australian 1500-metre champion, said that as well as being a run for a worthy cause, it was part of his training for the Commonwealth Games. “Instead of doing a hard run by myself, I’ve got a few thousand people to run with,” he said.

Mr John Wiles, 35, a planning consultant from Dingley, who ran with his two sons and their two friends aged between six and nine, said: “I don’t think children redly realise how well off they are until they see children suffering on TV.”

Sydney hosted the biggest race in Australia with 6000 entrants, while 3000 runners turned out in in Adelaide, Canberra and Brisbane. More than 2000 runners took part in Hobart and Perth.

Bob Geldolf, the musician who inspired the Band Aid concerts which raised hundreds of millions of dollars for Africa, was expected to complete the London run despite suffering from tonsillitis and exhaustion, and a heart specialist’s warning that he should not take part.