From the Archives, 1998: TV’s “Two Fat Ladies” draw a crowd in Melbourne

City lunchtime shoppers were given the choice yesterday between a fashion show and a book-signing by ABC-TV’s culinary heavyweights, the Two Fat Ladies.

More than 500 people chose the book-signing. “Why would you want to be looking at scrawny models when you could see real people,” said Janet from Newport. 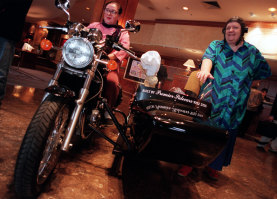 Alison, from Essendon, had even brought a photographer with her to immortalise on film the moment when Jennifer Paterson and Clarissa Dickson Wright signed her book.

“The Two Fat Ladies are superstars,” said Alison. “They’re fat, like real people. And they love to eat.”

There was general agreement from the queue that it was great to see fat people on television.

Betty, from Glen Iris, was explaining how she loved their strong personalities and the fact they didn’t care who they had a go at, when Paterson and Dickson Wright breezed past the queue into the depths of the ABC Shop.

The crowd gasped. Paterson and Dickson Wright offered some cheery hellos. The show was on the road. The autograph session lasted an hour-and-a-half, rivalling their previous record at a shop in Harrogate, England.

With their old English motorbike and sidecar, the silly but practical crash helmets and goggles (Paterson and Dickson Wright do all their own stunts) and the brisk banter, the duo have achieved a cult status here. 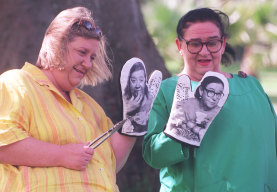 They have colorful pasts. Dickson Wright squandered a £1 million inheritance in earlier days and was temporarily disqualified from working as a barrister before conquering alcoholism. Paterson lost her job as a cook at The Spectator magazine after she threw a dinner service out the window in a rage. The editor asked her to write a cookery column instead.

The Melbourne leg of the tour includes a literary lunch and dinner at the Hilton.

The warmth of the reception has come as a surprise to the duo and is likely to help plans for a series based in Australia in 2000.

With their full figures and appreciation of old-fashioned cholesterol and fat-rich cuisine, they should provide a welcome antidote to the Olympics, but don’t suggest there is anything unhealthy about their diets.

“We cook what we like to eat, and we do eat healthily,” Dickson Wright told a press conference yesterday morning.

Dickson Wright: “If I felt uncomfortable with my size I might do something about it, but I don’t. The most important thing is not to let the buggers out there tell you how to look.”