Fury at civil service’s WFH phone line hell: Uncovered horror stories include callers routinely being put on hold for an hour and a 20 hour wait to confirm a tax payment while Covid is STILL being blamed for delays

Exasperated members of the public have demanded that ‘second-rate’ civil servants stop blaming working from home and the Covid pandemic for poor service.

Those ringing Government phone lines are waiting on hold for as long as two hours at a time to speak to someone who can help them with basic requests.

One NHS radiographer had to take four days of annual leave and spend a combined 20 hours on hold to confirm that his payment to HM Revenue and Customs had been received. 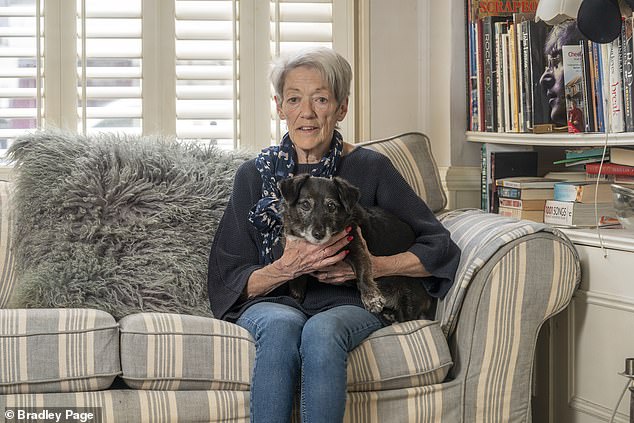 Mary Falconer, 75, tried to phone HMRC after a ‘final warning’ letter to get in touch over her tax return but was unable to get through and thinks she was a victim of a scammer 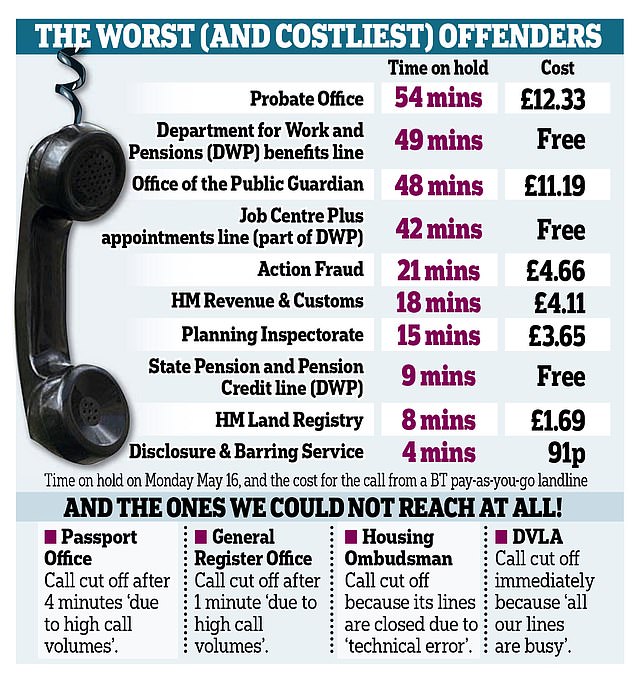 The Daily Mail has contacted a range of state services, some of whom failed to answer the phone in almost an hour at a cost of £12.33

We had to wait for up to 54 minutes or were simply cut off, directed online and forced to use paid-for lines costing around 23p a minute from a BT pay-as-you-go landline. Some departments buried their contact numbers on their websites.

Four organisations contacted by the Daily Mail, used by families and small businesses, blamed Covid or working from home (WFH) for long wait times and poor service. The civil service has faced accusations that working from home is still hitting productivity four months after ministers ordered staff back to their offices.

Last night Tory MPs said it was ‘outrageous’ that millions pay tax but get ‘nothing in return’.

Bereaved families said they had to wait on the phone to the Probate Office for as long as an hour, while staff are taking four weeks to read emails. A Mail reporter waited 54 minutes on hold last week, which would cost £12.33 from a BT landline.

The Office of the Public Guardian, which manages powers of attorney, told customers WFH ‘is impacting our response times’ and said they should ‘wait at least 20 weeks before contacting us’.

A pensioner was charged £169 by her phone provider after a run-in with HM Revenue and Customs customer service.

Mary Falconer, 75, tried to phone HMRC after a ‘final warning’ letter to get in touch over her tax return but was unable to get through.

She sought another way to get in touch online and was on hold to a number she found on Google for 45 minutes before giving up.

When her phone bill came she had been charged £168.98 for the call she now thinks was to a scammer.

Mrs Falconer later discovered the ‘final warning’ letter from HMRC had been sent in error.

Two Department for Work and Pensions lines, for benefits inquiries and Job Centre appointments, had waiting times of 49 and 42 minutes respectively. The Land Registry, which looks after property registers, said it still has a ‘reduced’ service and the ‘wait time may be longer than usual’.

Companies House, part of the business department, told callers ‘you may experience longer waiting times than usual’ and they ‘may hear some background noise as our advisers are working from home’. It also said its offices in Cardiff, Belfast and London are still closed ‘due to coronavirus’.

The Disclosure and Barring Service (DBS), which carries out criminal records checks, said callers ‘might experience longer wait times’ because of the ‘ongoing coronavirus pandemic’. Our calls to the Driver and Vehicle Licensing Agency (DVLA), Passport Office and General Register Office cut out due to ‘high call volumes’.

Tory MP Robert Halfon said: ‘It’s outrageous. Millions of us are forced to pay our taxes and yet we’re getting nothing in return.

‘These organisations should be inspected and if they are not dealing with customers efficiently, the bosses should be fired.’

Another Tory MP, Sir Christopher Chope, said: ‘The Government has allowed people to work much less efficiently from home and the result is… second-rate standards.’

The revelations come as Money Mail’s Pick Up Or Pay Up campaign highlights long delays in contacting private firms, calling for those that don’t pick up the phone within ten minutes to be fined. Hundreds of readers told of poor service, with many furious at Government departments. They included an NHS radiographer from Dorset who took leave and spent 20 hours on hold to HMRC to get a receipt for a tax bill.

‘Obviously they are all working from home. It was an absolute nightmare,’ the 44-year-old said.

The Office of the Public Guardian said it ‘acknowledges the process needs modernising’.

HM Land Registry said its message had been out of date and ‘this has now been rectified’.

HM Courts and Tribunals, responsible for the Probate Office, said: ‘We have hired more staff.’

The DBS said its hold message was out of date but it had met standards ‘for the past few months’.

We spent six months in limbo

A retired couple have waited more than six months for power of attorney documents despite paying £174 for the service.

Richard Gale, 71, who lives with his wife Kathleen in Hertfordshire, started the process in December so their sons can act for them ‘if anything happens’.

He has repeatedly had his application pushed back and has phoned ‘several times’ this month for an update. On one occasion, he gave up after he was told he was number 71 in the queue. He has still not received his documents.

This week the hold message of the authority responsible said Covid and WFH were ‘impacting our response times’.

Mr Gale said: ‘I don’t see how you can use Covid as an excuse now. A six-week process has turned into six months.’ 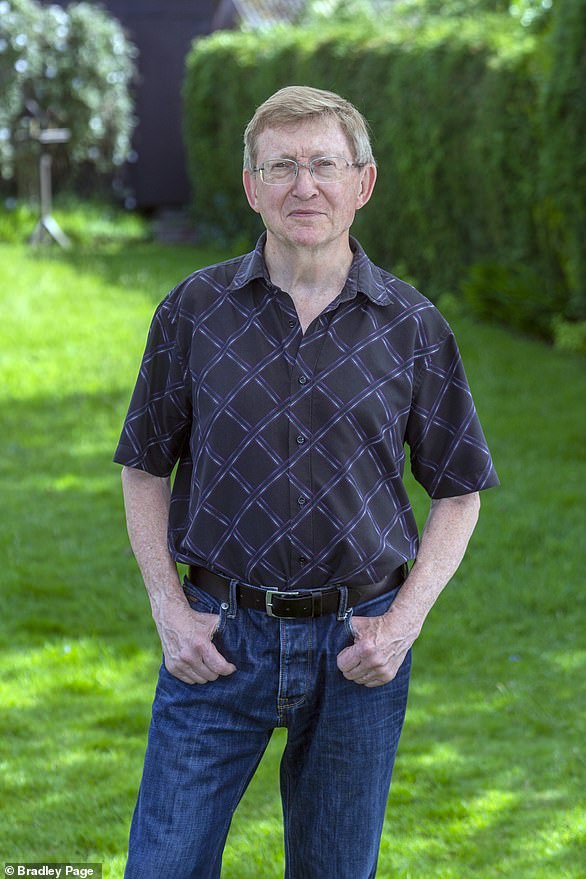 Richard Gale, 71, who lives with his wife Kathleen in Hertfordshire, started the process in December so their sons can act for them ‘if anything happens’