Father Joe Petito and stepfather Jim Schmidt discuss the search for Gabby in Jackson, Wyoming, her fiancé, and the statement he put out through his lawyer

The fiancé of Gabby Petito, a 22-year-old woman reported missing on Sept. 11, has been inundated with comments about the young woman’s disappearance on his public Instagram profile.

Brian Laundrie, 23, has not been charged with a crime, but he is now considered a person of interest in the case, according to the North Port Police Department. Police in his hometown of North Port, Fla., told Fox News Tuesday they want to speak with him about the case.

“Where is she? Please tell her family,” reads one comment with more than 1,700 likes on Laundrie’s last photo posted to Instagram. 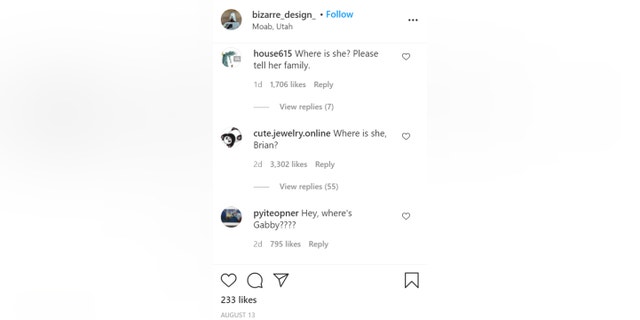 A number of photos posted to his account have been flooded with similar comments demanding answers from Laundrie on his fiancé’s disappearance.

The couple was traveling cross-country in their Ford Transit van and sharing photos and videos of their trip to social media. The 22-year-old Petito’s mother reported her missing on Sept. 11, but they had last spoken in the final week of August. 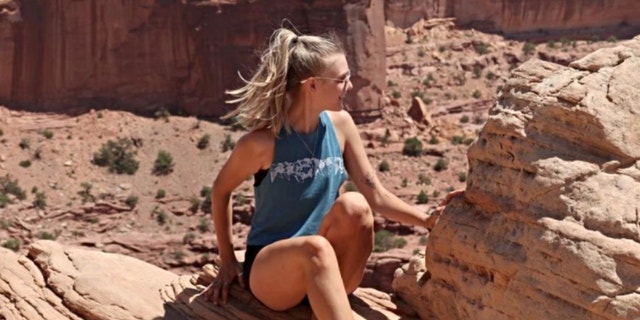 Laundrie’s last photo posted on Aug. 13 has a long-winded caption about primates and concludes with, “I think if we all want breathable air and drinkable water we all need to learn how to live with less.”

“I think anyone would assume that the possible last person to be around her is a person of interest to want to talk with,” a spokesman said. “However, there is no crime at this point.”

Laundrie has hired an attorney and returned to Florida – in Petito’s van – as a search is underway in Wyoming. The missing woman’s family says he refused to tell them where he last saw her.

Police seized the van Monday as part of their investigation, which involves law enforcement agencies in multiple states and the FBI, the latter of which began a forensic examination on the vehicle Tuesday, North Port police told Fox News.