Gangster’s moll, 27, who was caught with her lover’s Glock pistol buried in her garden after gangland shooting walks free because she was in state of ‘hormonal upheaval’ at the time 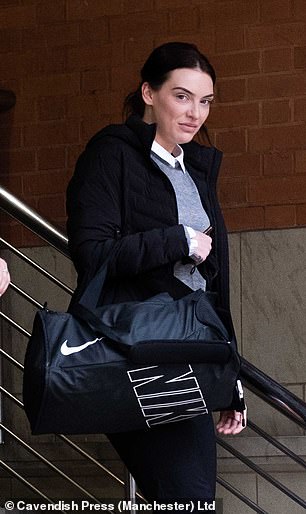 Amy Quinn, 27, was arrested after detectives found the loaded Glock 26 pistol buried at her home in Greater Manchester

A gangster’s moll who faced five years in jail after being caught with her lover’s gun has been freed because a judge ruled she must have been in a state of ‘hormonal upheaval’ at the time.

Mother-of-two Amy Quinn, 27, was arrested after detectives found the loaded Glock 26 pistol buried at her home in Oldham, Greater Manchester.

Her boyfriend Clive Wallace, an underworld Mr Big who operated as a ‘talent scout’ for crime gangs, had previously seized the pistol after it was fired in the air during a 5am gangland fight.

The 37-year-old subsequently attended Quinn’s home in his Audi A3 before asking her if he could hide the gun under a strip of astroturf.

Quinn, who had a daughter with Wallace, admitted unlawful possessing a firearm at Minshull Street Crown Court, Manchester, and faced a mandatory five years imprisonment under UK gun laws.

But she was instead given a 22-month jail suspended for two years and ordered to complete 200 hours unpaid work after she said she had no idea the package she was hiding was a gun and that she had been living in fear of her boyfriend.

Wallace was jailed for eight years at an earlier hearing.

Sentencing Quinn, whose children are both now in care, Judge Tina Landale told her: ‘Regrettably, many people are exploited by serious criminals because vulnerable people are targeted for the reason that they can expect to have sympathy from the court.

‘I do not necessarily find this in your case as you were in a relationship with Mr Wallace that had been in force for some considerable time, because you had children together.

‘But you were under pressure and intimidation and I accept you had no knowledge that the item you hid in the ground was a firearm or ammunition.

‘I also take into account the fact that at the time of this offence, you were particularly and extremely vulnerable because you had a four-month-old baby, and your hormones and hormonal upheaval must be an additional factor. 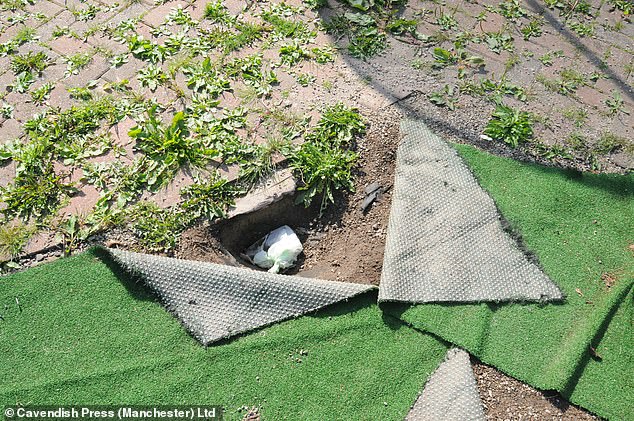 Her boyfriend Clive Wallace, an underworld Mr Big, had previously seized the pistol after it was fired in the air during a 5am gangland fight before asking Quinn if he could hide the gun under a strip of astroturf (pictured) 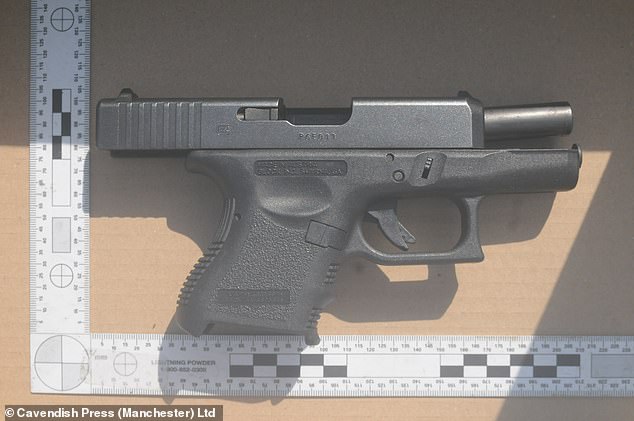 Quinn, who had a daughter with Wallace, admitted unlawful possessing a firearm at Minshull Street Crown Court, Manchester. The loaded Glock 26 self-loading pistol

‘That meant the pressure upon you would be even more exceptional than it would have been in a coercive relationship. I can take account of all these features and consider that there were exceptional circumstances in this case. A custodial sentence is inevitable, but the mitigation allows me to suspend this sentence.’

The shooting occurred on July 14 2019 after police were called to a mass brawl in Manchester’s Cheetham Hill area.

Prosecutor Darren Preston described how the handgun had been pointed in the air during the ‘large-scale incident’ before it was discharged.

Wallace gestured to the gunman to follow him before taking the pistol and putting it ‘in the front of his trousers’.

He later produced the gun himself as the violence escalated and ‘held it in a way which was visible for all nearby to see’.

Police attended Quinn’s home a short time later where CCTV was recovered showing Quinn hiding a package before Wallace left a car with one witness reporting they saw him bury the gun. 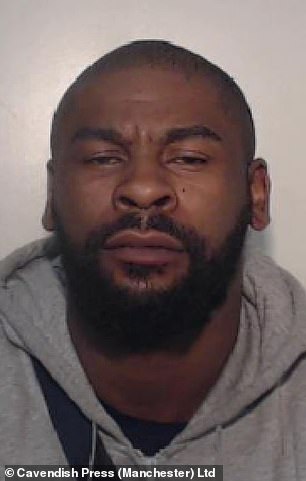 Wallace, 37, was jailed for eight years at an earlier hearing

Officers also found £155 worth of cannabis plus 4.28g of cocaine and weighing scales. Quinn also had cannabis supply related texts on her phone.

She later told police Wallace had been abusive towards her and ‘did what she was told’.

A basis of plea read to the court said: ‘Clive Wallace was very controlling and made threats both to her and against her family. He had CCTV installed at her address so he could watch what was going on. He did not live there but attended whenever he wished.

‘He was frequently violent and at the time of her arrest, she had bruises caused by Clive Wallace.’

‘Amy Quinn was afraid of him and she was told to hide a package by Wallace. It contained ammunition and a firearm but she had never seen the inside of the package and never had anything do to with it when she had it.

‘She did not feel she could refuse it but accepts that this falls short of duress. She accepts that she was involved in the supply of drugs but under the direction of Clive Wallace.’

‘It was a package that Mr Wallace told her to hide, which she did but she had no knowledge the package was a firearm. She has cooperated and shown remorse through her plea and other actions. She is not involved in organized crime.’

Wallace was previously named by police as a ‘recruiter’ for gangs in South Manchester.

He denied the claims but admitted possessing a firearm with intent to provoke fear of violence and violent disorder.

He had 35 offences on his record including attempted robbery at gunpoint and possessing a knife. In 2011 he was jailed for six years after being caught with a loaded revolver by police investigating an attack on another man.