The former Wales and Lions rugby captain has been accused of ‘concealing’ his HIV positive condition and failing ‘to take reasonable care’ to ensure he did not transmit the virus to Ian Baum.

HIV carriers can be charged with grievous bodily harm if they fail to declare their status to potential sexual partners and pass on the infection.

In a case due to be heard in the High Court, Mr Thomas, 48, is accused by Mr Baum, 59, of ‘assault, battery, infliction of intentional harm and negligence’.

The claim is for at least £150,000 in damages, though could be higher for ‘serious physical and psychological injury’ and a ‘resultant loss of life expectancy of approximately six to eight years’. 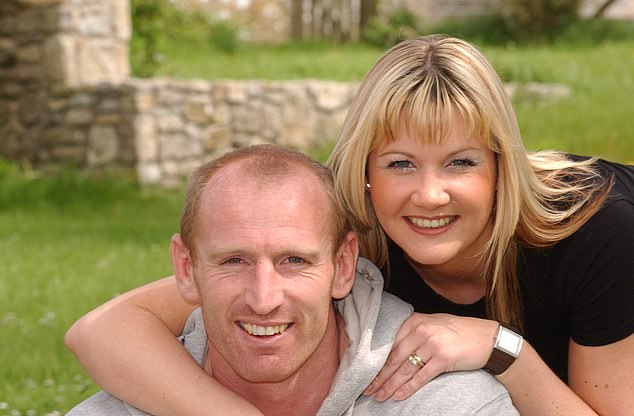 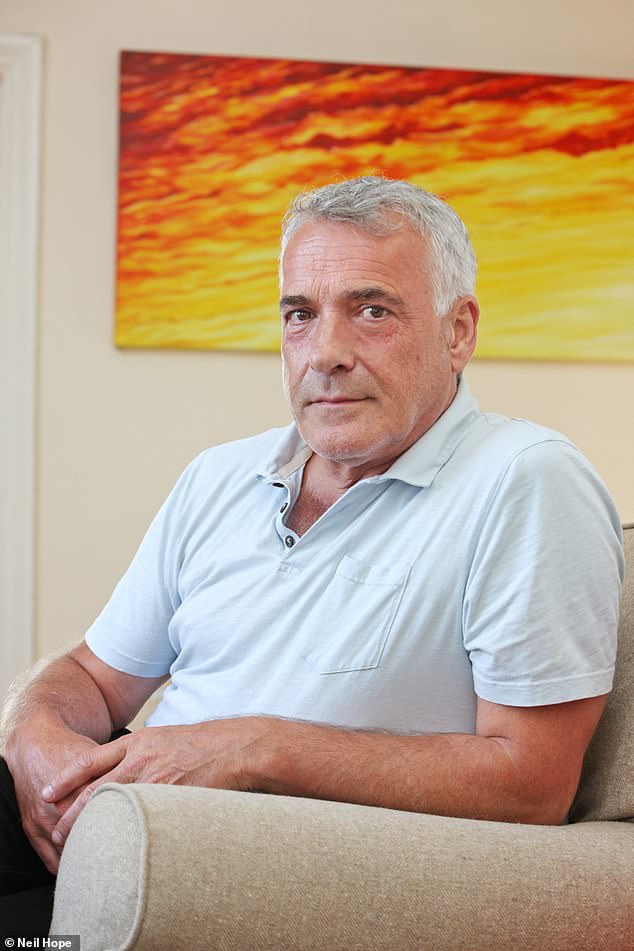 In a case due to be heard in the High Court, Mr Thomas, 48, is accused by Mr Baum, 59, of ‘assault, battery, infliction of intentional harm and negligence’ 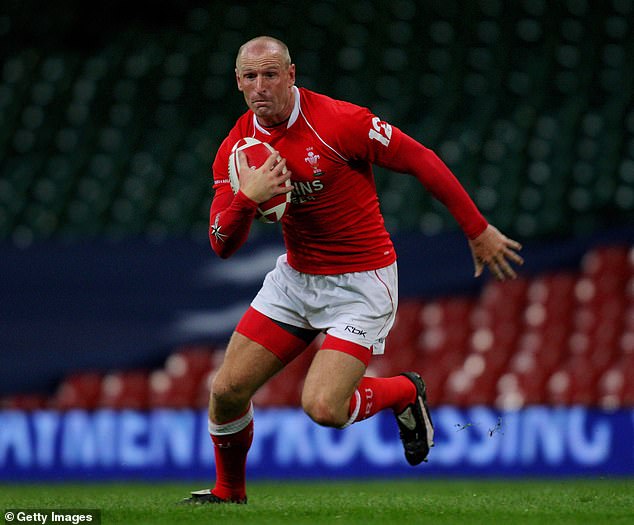 The allegations, referring to a period between 2013 and 2018, came before Mr Thomas announced in an interview and BBC documentary in 2019 that he was carrying HIV.

Ever since, Mr Thomas has championed equality and inclusion, including for all of those living with HIV, and been a respected spokesman for the LGBT community.

When Mr Thomas revealed he was HIV positive, Prince William tweeted: ‘Courageous as ever, legend on the pitch and legend off it.’ The former rugby star has also been awarded a CBE for services to sport and health, and is an ambassador for the Terrence Higgins Trust HIV charity.

Mr Thomas said: ‘Many people live in fear and shame of having HIV, but I refuse to be one. We need to break the stigma. I’m speaking out because I want to help others and make a difference.’

He has spoken movingly of how he had tried to suppress his true sexuality for 20 years and throughout his five-year marriage to his childhood sweetheart, Jemma.

Mr Baum accuses him of using ‘coercive and controlling’ behaviour to prevent him pursuing a prosecution and revealing his HIV status. Mr Thomas strongly denies the allegations and is expected to file a ‘robust defence’, with a source close to the star describing the claim as a ‘work of fiction’.

Mr Baum, who has provided medical evidence to show he was HIV negative two months after meeting the former rugby star in September 2013, claims that within eight months of their relationship beginning he had contracted HIV.

In the court documents, Mr Baum alleges that Mr Thomas lied to him ‘about his HIV status and had coerced the claimant into having unprotected sexual intercourse when he knew that by doing so he was putting the claimant at risk of contracting HIV’. 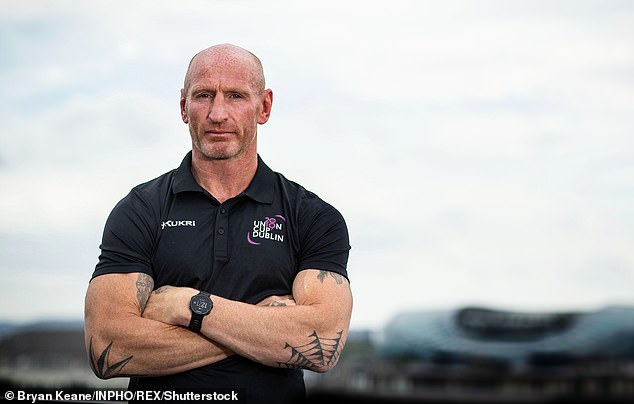 Former Wales and Lions captain Gareth Thomas, 48, has championed equality and inclusion, including for all of those living with HIV

Mr Baum, a home carer who lives in Plymouth, alleges Mr Thomas ‘was, and knew he was, already positive with the virus’ when they met. Mr Thomas is also said to have claimed to Mr Baum he took a test showing he was HIV negative.

But Mr Baum, who lived with him in Bridgend and Berkshire, claims to have discovered the sports star’s HIV status in May 2014.

Mr Thomas is said to have regularly taken pills which he claimed were ‘multivitamins’. Yet eight months after the pair’s relationship began, Mr Baum says he discovered a pill marked ‘GSK1’ on the floor. The claim states that ‘on Googling the pill, the claimant discovered that the defendant was taking anti-viral HIV medication’.

Mr Baum says he was ‘devastated’ to discover after a taking an HIV test that he was positive.

According to the court documents, Mr Baum ‘went into immediate shock and called the defendant [Mr Thomas] for an explanation, who was very repentant and apologetic on the telephone’.

As part of his refutation of the claims, Mr Thomas’s lawyers are said to have disclosed a note, dated January 2016, from Mr Baum saying: ‘I lied – I already had HIV. Give this to your solicitor.’

Mr Baum claims he does not recall writing it and that he was ‘in a confused and vulnerable state’.

It also appears to contradict medical evidence he provided to the court. According to his submission, ‘The claimant accepts that he would have done anything to try to save the relationship.’

Mr Baum is seeking damages for various physical and mental ailments arising from his HIV condition, including bouts of depression.

WHO IS GARETH THOMAS?

Gareth Thomas is a former Welsh rugby player. He has represented Wales in both Rugby Union and Rugby League and was the most capped player in the country until he was overtaken in 2011.

He came out as gay in 2009 following a split from his wife and childhood sweetheart Jemma in 2007, becoming the first openly-gay rugby player in Britain.

Thomas, who is affectionately known as ‘Alfie’ due to his ‘resemblance to the alien character in the TV sitcom ‘Alf’, battled with his sexuality for years, telling of how he was driven to the brink of suicide on multiple occasions.

He told the Daily Mail in December 2009: ‘I was like a ticking bomb. I thought I could suppress it, keep it locked away in some dark corner of myself, but I couldn’t.

‘It was who I was, and I just couldn’t ignore it any more. I’d been through every emotion under the sun trying to deal with this.

‘You wake up one morning thinking: ‘I can handle it. Everything is fine,’ and the next morning you don’t want anyone to see your face, because you think that if people look at you, they will know.’ 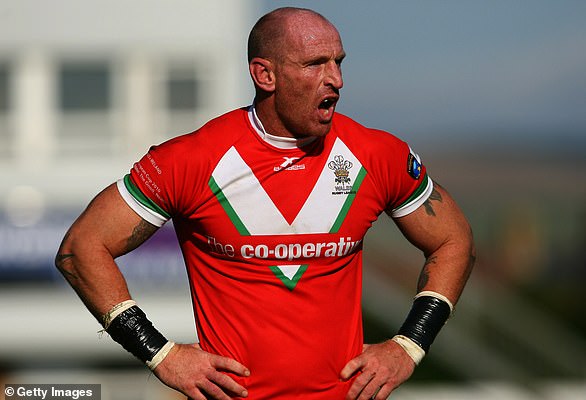 He went on: ‘Sometimes I felt so alone and depressed. I’ve stood on so many cliff edges.

‘I used to go to the cliffs overlooking the beach near our cottage in St Brides Major and just think about jumping off and ending it all.’

The year after he came out he was voted the most influential gay person in the UK and has since worked with multiple LGBT charities among others.

Thomas is the youngest of three sons. His older brothers are Richard and Steven. His father Barry, 69, is a retired postal worker, and his mother Yvonne, 70, a former hospital secretary.

He began his sporting career with his native Bridgend in 1994, staying there for three years. He made his debut for Wales the following year, representing his country until 2007.

With 100 appearances he was the most capped Welsh Rugby Union player ever until 2011 when the accolade was taken by Stephen Jones. 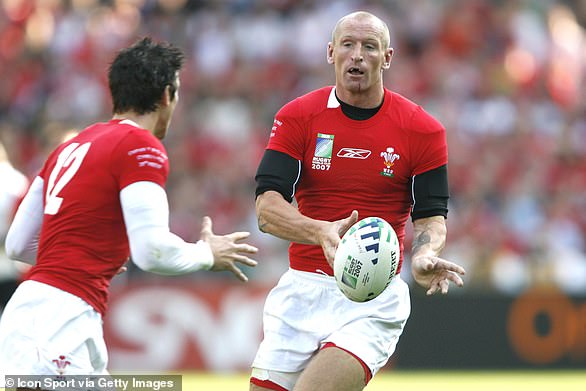 The fullback was the second highest try scorer for Wales, behind Shane Williams and captained for his country, and various club squads.

During his time in France he was found guilty of assault in 2005. Two years later he was banned from the game for four week on misconduct charges.

While he was still playing in France he suffered a major health scare after a neck injury. He was later rushed to hospital and was suspected to have had a stroke, with fears the impact on his health may have led to his retirement.

After marrying childhood sweetheart Jemma in 2002, the couple struggled with relationship problems.

Thomas said he ‘knew he was gay’ at the age of around 16 or 17, but failed to accept it until years later.

He admitted cheating on her multiple times, insisting he always practised safe sex when sleeping with men. 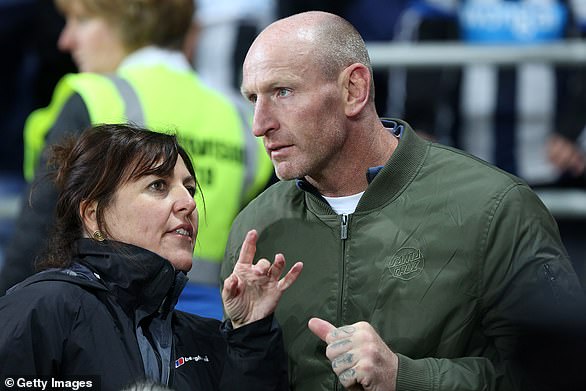 The couple were married for five years, during which time Jemma suffered three miscarriages. They split in 2007 with the divorce finalised in 2009.

Thomas carried on playing rugby until 2011 when he suffered a broken arm. After missing two months, he announced he would be retiring from the sport in October that year.

Since he came out in 2009, Thomas has worked with numerous charities, including ChildLine, the Terrance Higgins Trust and Stonewall.

In January 2012 he went into the Celebrity Big Brother House, finishing in the final three.

A year later he appeared on Dancing On Ice, when he was partnered with professional skater Robin Johnstone. 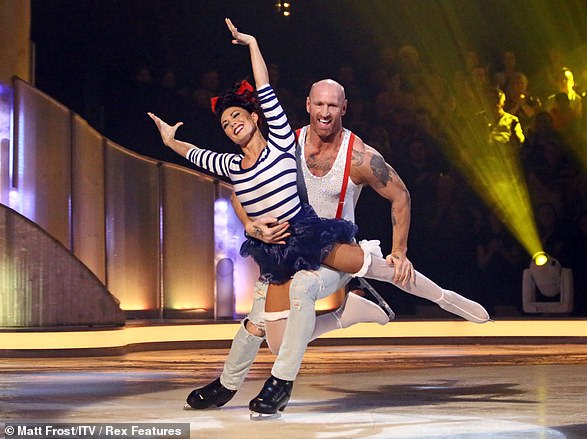 This was around the time a film was due to be made about Thomas’s life. Actor Tom Hardy was due to play Thomas, but the film later fell through.

His autobiography Proud was released in 2015, which gave distressing details about his battle with his sexuality.

In November 2018 he was assaulted in Cardiff city centre in a homophobic attack. He took to social media to share his ordeal and requested South Wales police deal with the 16-year-old suspect by way of restorative justice.

In September 2019 he became the first major British sports star to come out as HIV-positive.

He said he has been living with the virus ‘for years’ and also revealed he is now re-married to a man named Stephen, 56.

His husband does not have HIV and the couple live in Bridgend, South Wales, with Stephen’s 23-year-old daughter Anna.