Gary Busey, 78, is accused of groping several women at a convention

REVEALED: Gary Busey, 78, ‘put his face near woman’s breasts and asked her where she got them before he tried to unlatch her bra’ at horror convention where he is accused of groping several women

Actor Gary Busey has been accused of groping several women at a horror convention where he allegedly put his face near a woman’s breast before he attempted to undo her bra.

Busey, 78, was charged on Friday with four counts of sexual contact and harassment after one woman claimed the actor asked where she got her breasts from, while another said Busey grabbed her butt at the annual Monster Mania Convention in Cherry Hill, New Jersey.

Police received an additional call from a man who said his daughter was also sexually assaulted by Busey at the convention on August 13, according to documents obtained by TMZ.

The Buddy Holly actor denied the allegations before he requested to apologize to the woman while saying it’s possible to ‘accidentally touch someone in a specific body part,’ according to legal documents. 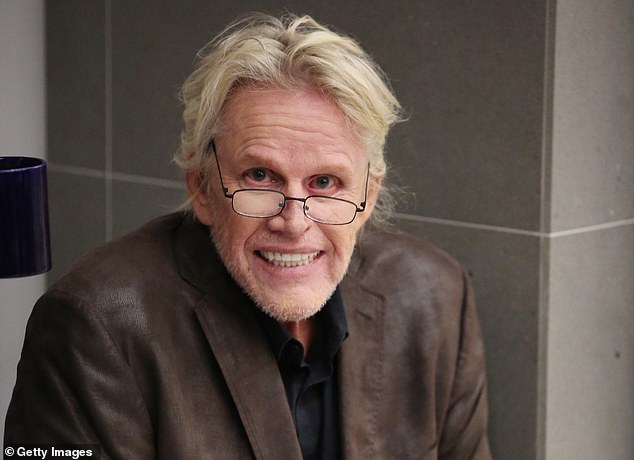 Gary Busey allegedly put his face in a woman’s breast before attempting to undo her bra at a New Jersey fan convention last weekend. The actor was charged by police after groping several woman 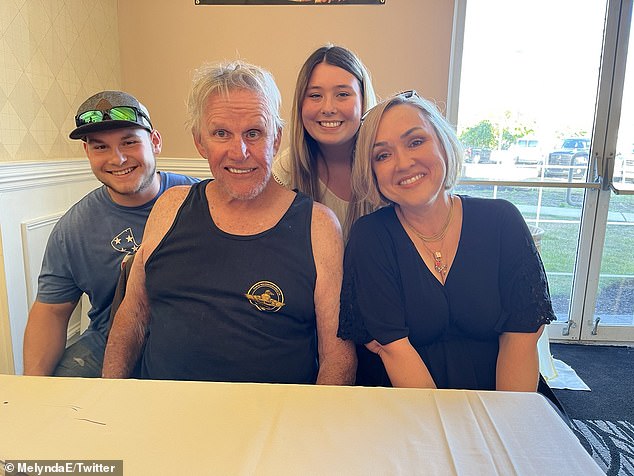 Busey is seen with fans at the annual Monster Mania Convention, which was held at the Doubletree Hotel on August 12 to 14 in Cherry Hill, New Jersey 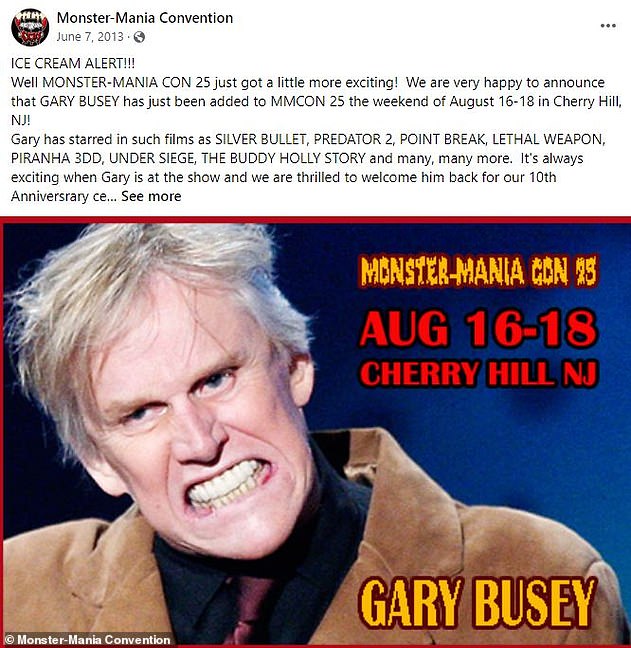 The actor, who lives in Malibu, California, was scheduled as a featured guest for all three days of the event

Busey lives in Malibu, California, and was contacted by Monster Mania event organizers to appear for the three day event from August 12 to 14.

Cherry Hill Police say three women were touched by Busey inappropriately during an autograph signing and meet and greet.

‘It was about contact. It was about touching,’ Cherry Hill Police Lt. Robert Scheunemann told the Philadelphia Inquirer, noting that ‘multiple complaints’ about the actor’s conduct had been received throughout the weekend.

Police initially did not identify the suspect as the actor, but followed up with a statement saying that Busey was the man facing charges.

At the convention Busey was said to be appearing alongside other actors including Ralph Macchio, Tom Skerritt and Veronica Cartwright. 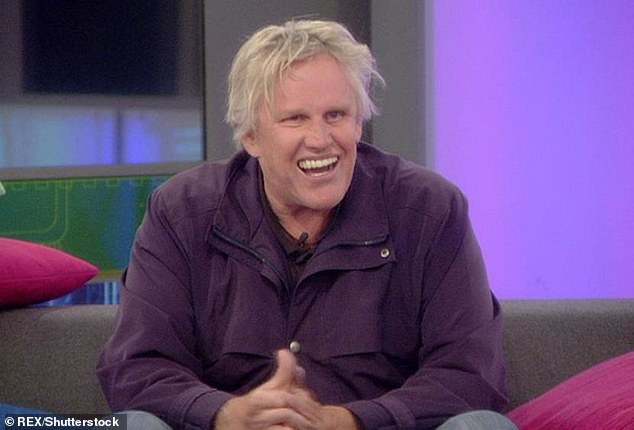 Busey, 78, was charged on Friday with four counts of sexual contact and harassment. Police received reports of misconduct during and after the three-day convention 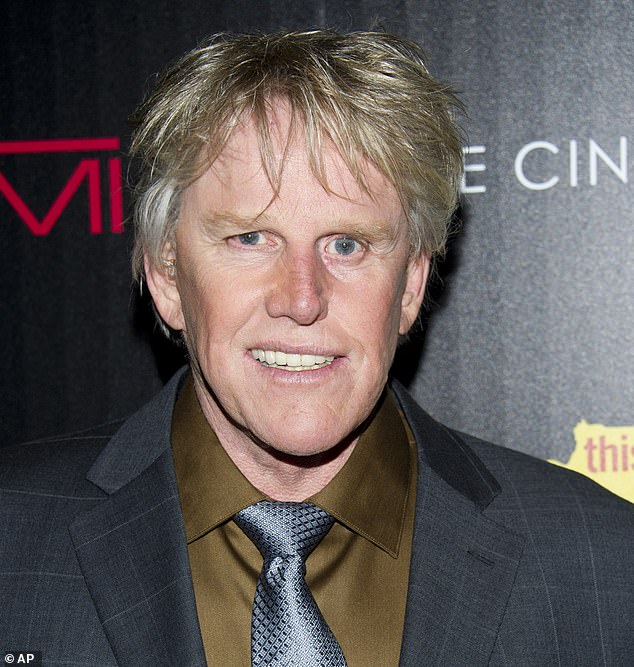 The Buddy Holly actor denied the allegations, but later asked to apologize while stating it’s possible to accidentally touch someone in the wrong place

A lawyer for the convention, Nikitas Moustakas, said the company was ‘assisting authorities in their investigation into an alleged incident involving attendees and a celebrity guest at its convention.’

‘Immediately upon receiving a complaint from the attendees, the celebrity guest was removed from the convention and instructed not to return,’ he said.

‘Monster-Mania also encouraged the attendees to contact the police to file a report. The safety and well-being of all our attendees is of the utmost importance to Monster-Mania, and the company will not tolerate any behavior that could compromise those values.’ 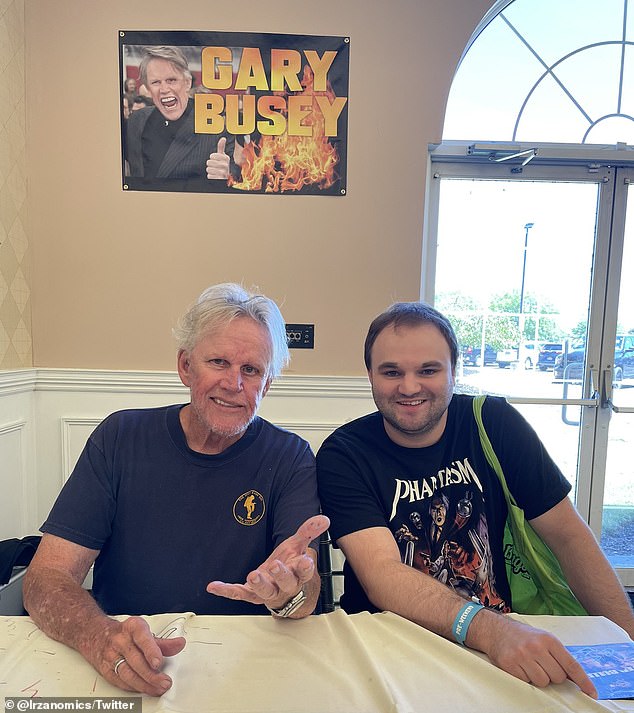 Gary Busey (seen last year) has been charged with sexual offenses at a New Jersey fan convention last weekend. Pictured, one of the many fans who posed for pictures 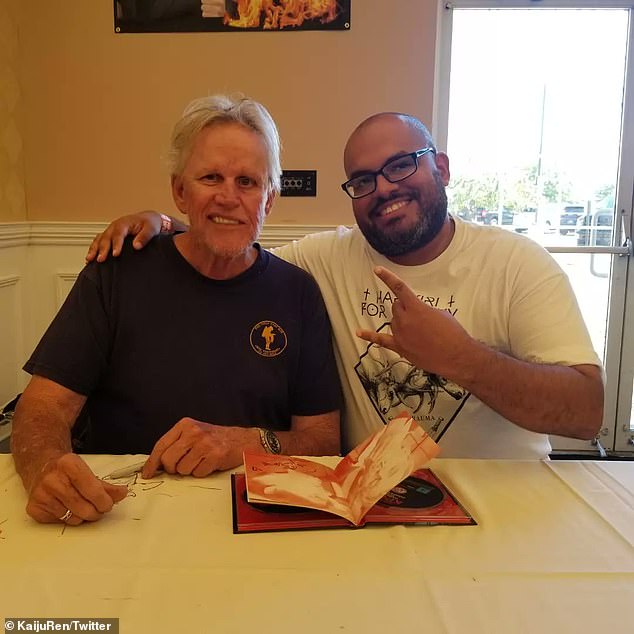 Busey is seen with a fan the annual Monster Mania Convention, which was held at the Doubletree Hotel on August 12-14 in Cherry Hill, New Jersey

Event throwers encouraged attendees touched by Busey to file a police report. They ensured he was removed from the convention and instructed to not return 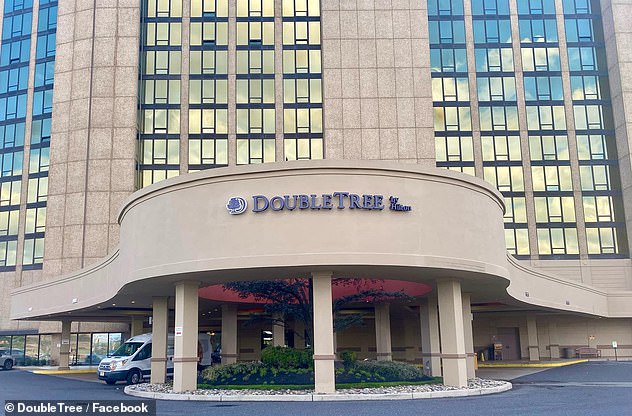 A week after the accusations, Busey was caught with his pants down at Point Dume Park in Malibu, California, on Saturday.

Busey appeared to perform a lewd act and then lit up a cigar – hours after he was charged with groping the three woman.

Shocking photos show the actor was wearing a shirt that referenced the 1991 film ‘Point Break,’ in which he had a supporting role. Busey made his way to the bench at a lookout point, where he sat down, pulled out his phone and then pulled down his pants.

Busey stuck one hand down the front of his pants, appeared to clench his jaw and then looked around to make sure no bystanders had caught him in the lewd act.

Seemingly satisfied with his actions, Busey lit up a cigar and looked out over the ocean for nearly 30 minutes before getting back in his car and leaving the park. 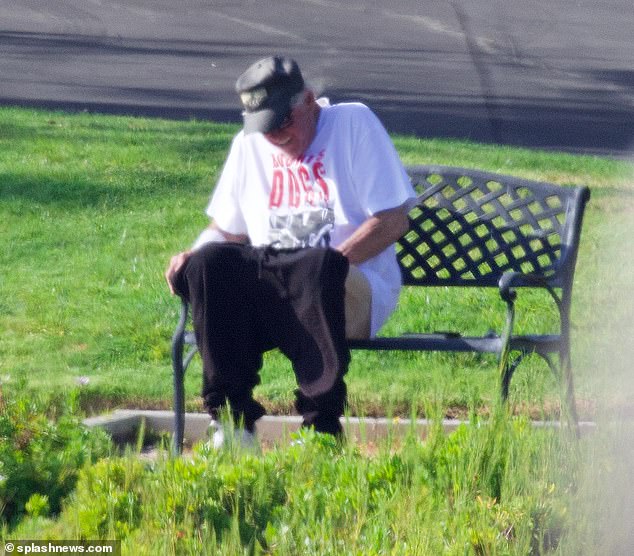 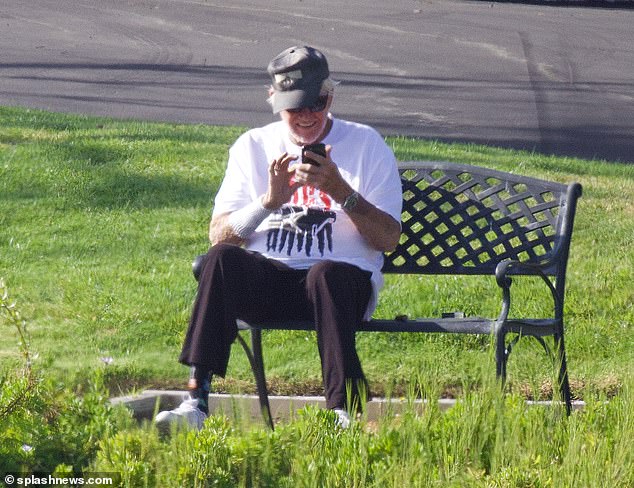 Busey was spotted on a bench at the lookout point, where he sat down, pulled out his phone and then pulled down his pants 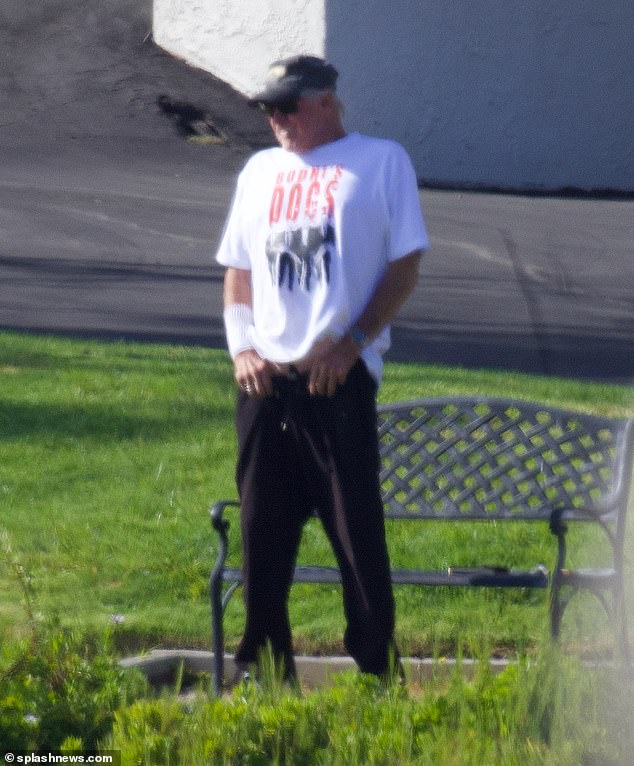 Busey is widely known as a character actor, largely in supporting roles, though he came to attention and was nominated for an Oscar for best actor for playing the title role in the 1978 film The Buddy Holly Story.

His various acting credits include Point Break, Under Siege, Rookie of the Year, Lethal Weapon and Predator 2.

Busey is married to Steffanie Sampson. The couple have been together since 2006 and got hitched in 2008. Together they share a 12-year-old son, Luke.

The actor also has two children from previous relationships, Jake, 51, and daughter Alectra, 28. 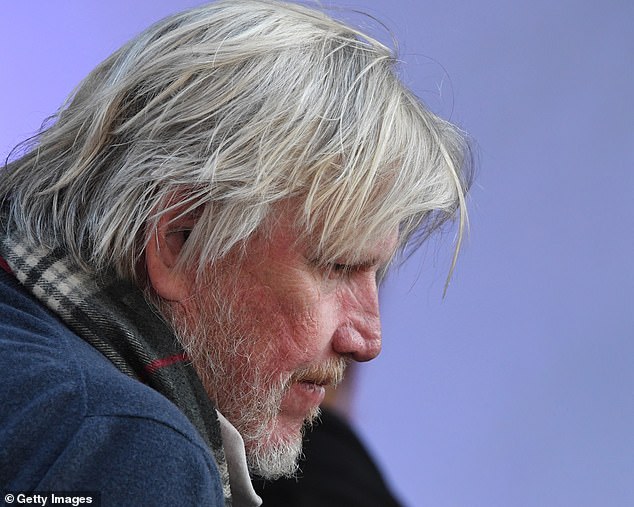 Busey is known for playing the title role in the 1978 film The Buddy Holly Story. He was nominated for best actor in the piece 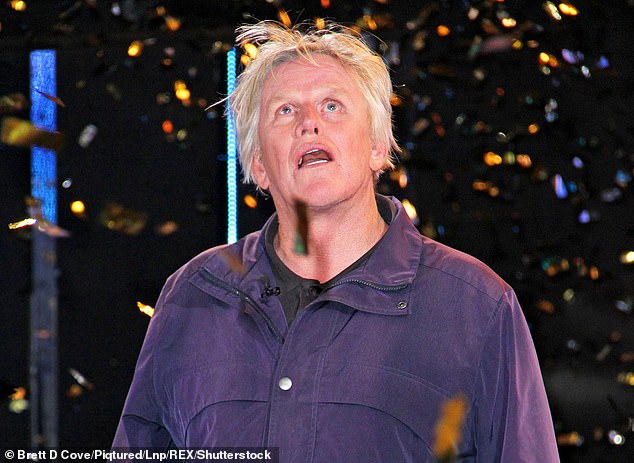 Aside from the current charges, he previously faced drug charges in 1995 when authorities found cocaine during a search of his Malibu home

Busey previously faced drug charges in 1995 when authorities found cocaine during a search of his Malibu home.

In the past he has also been arrested on charges of spousal abuse.

In 2011, during a season of Celebrity Apprentice, he was accused of sexually assaulting a female employee of the show.

‘We were smoking cigarettes outside, and Busey was standing next to me,’ an employee told the Daily Beast in 2016. ‘And then at one point, he grabbed me firmly between my legs, and ran his hand up my stomach, and grabbed my breasts.

‘I didn’t know what to do. So I made this joke that, “Oh, I’ve never been sexually harassed by a celebrity before!” Then he grabbed my hand and put it [over] his penis, and said, like, “I’m just getting started, baby.”‘