George and Amal Clooney's Berkshire mansion is surrounded by water

George and Amal Clooney’s £12million Berkshire mansion is on high alert for major flooding – amid warnings over the wet weather.

The Ticket To Paradise star, 61, and his lawyer wife, 44, first moved into the Sonning country pile back in 2016.

But the property has been dogged with flooding issues to due to its proximity to a river which frequently bursts its banks.

And before the married couple had even moved in they had to carry out an intensive 18-month long refurbishment when it was previously hit by water. 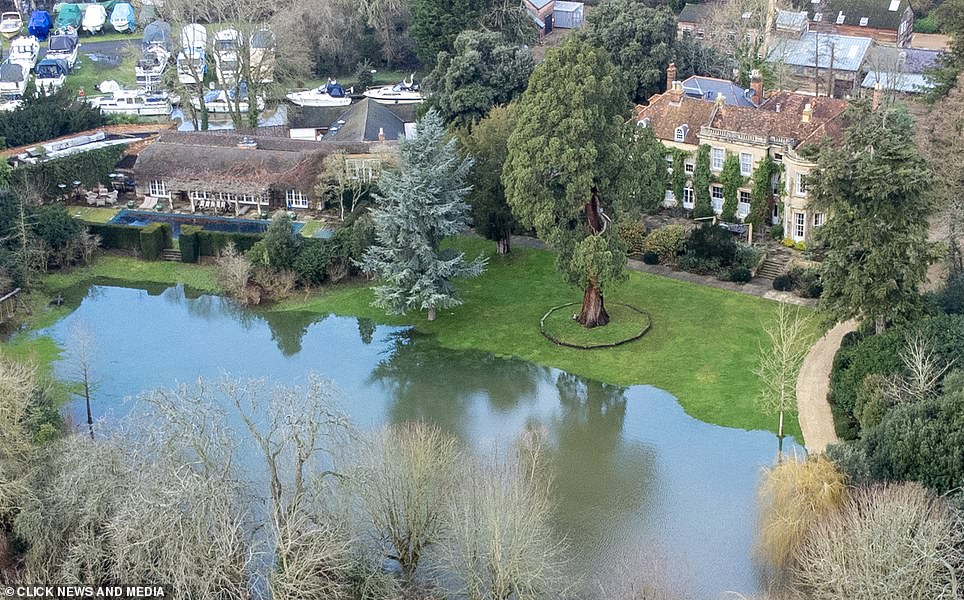 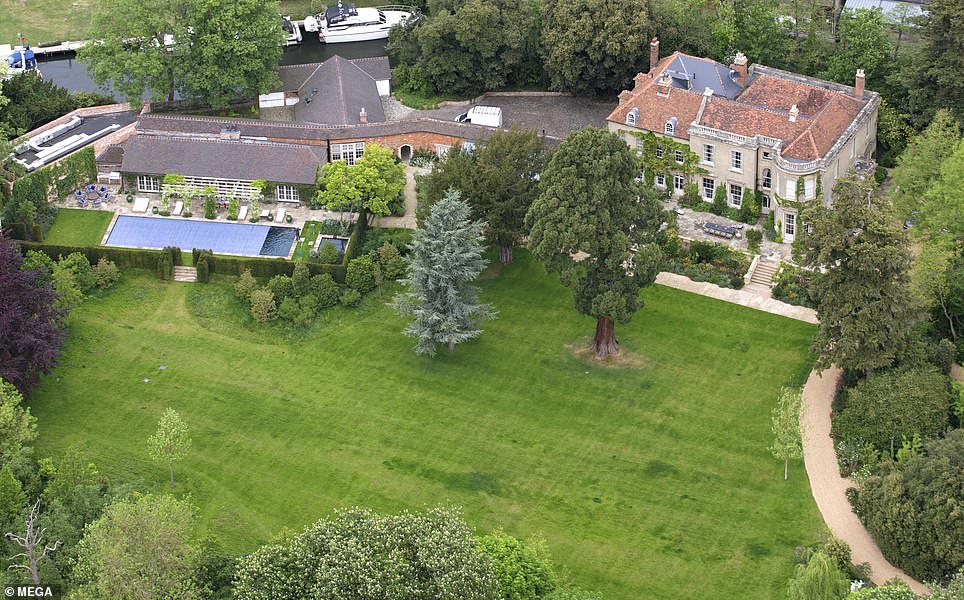 Now and then: The Clooney mansion today (left) and in happier times (right) before the devastating floodwater came 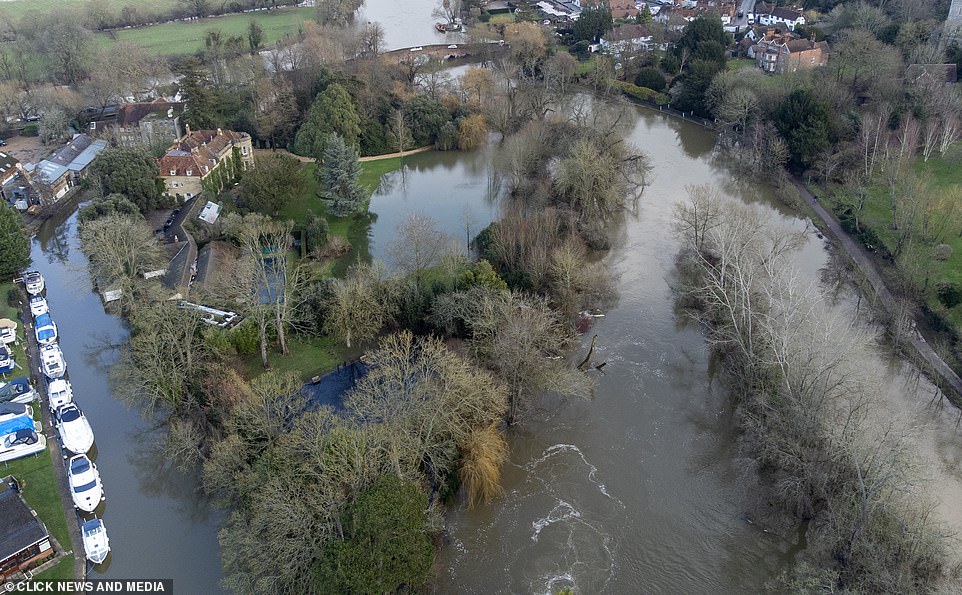 The house has waterways surrounding it, which make it vulnerable in times of heavy rainfall and the banks overflowing 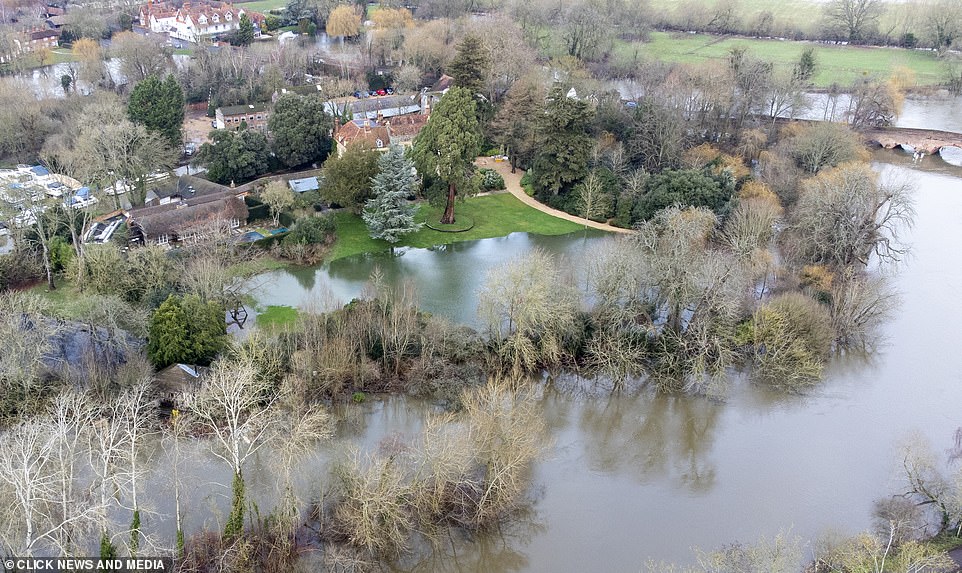 It comes as a cold snap moves in from Arctic and The Met Office says overnight sleet will leave slippery surfaces which could cause ‘injuries from slips and falls’.

The Environment Agency (EA) has also issued flood alerts for parts of Berkshire and Oxfordshire.

The tennis court, veranda and most of the previously luscious lawn have been submerged by filthy flood water from the nearby river.

The couple, who welcomed their twins Alexander and Ella in June 2017, paid an undisclosed amount for the Grade II listed mansion, which was put on the market for £7.5million in September 2014. 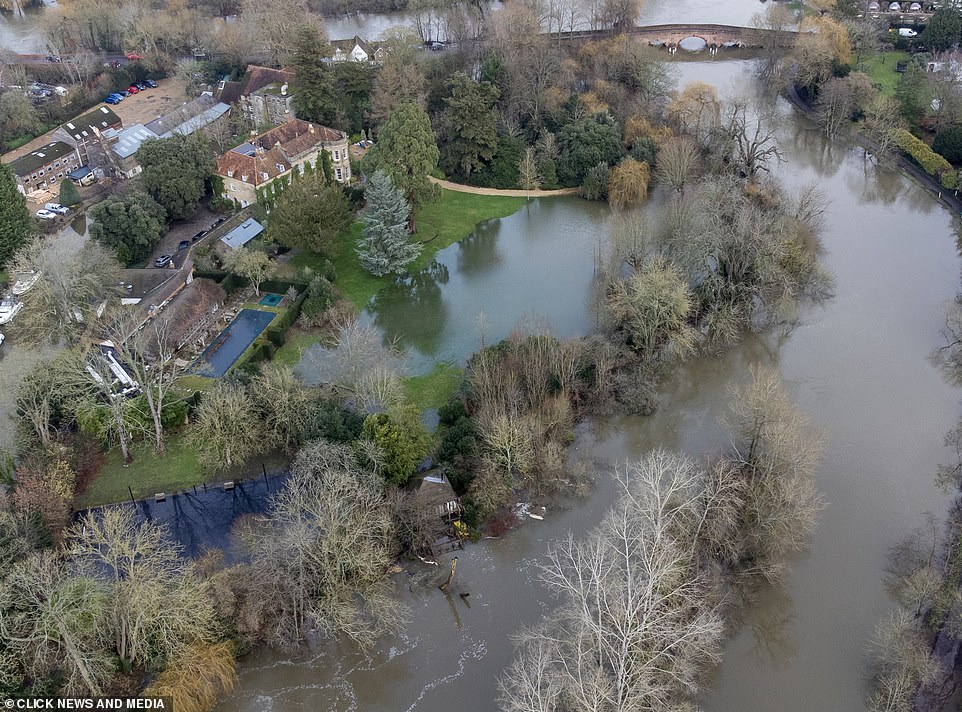 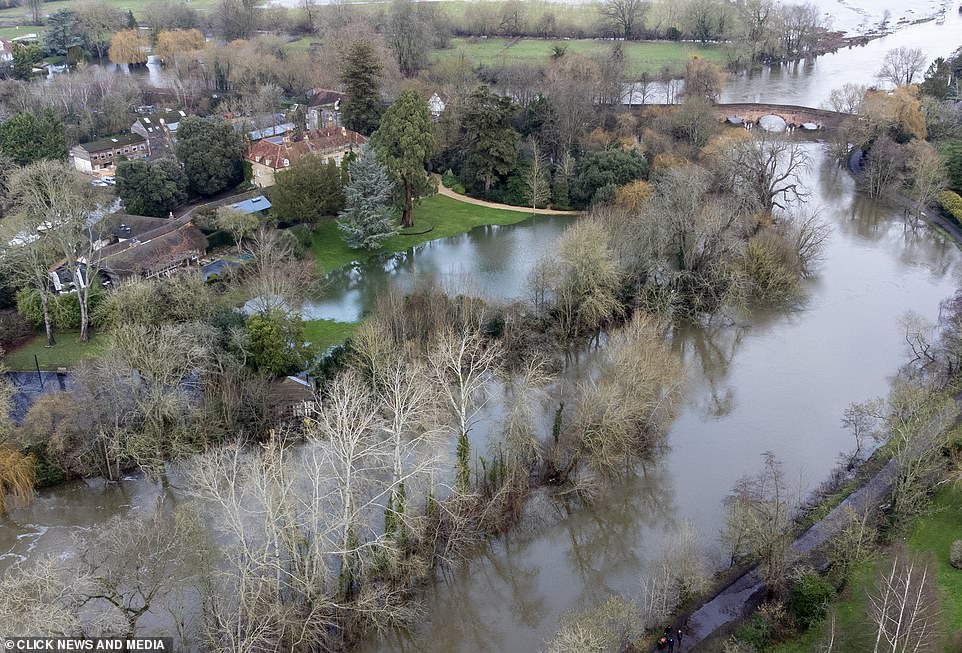 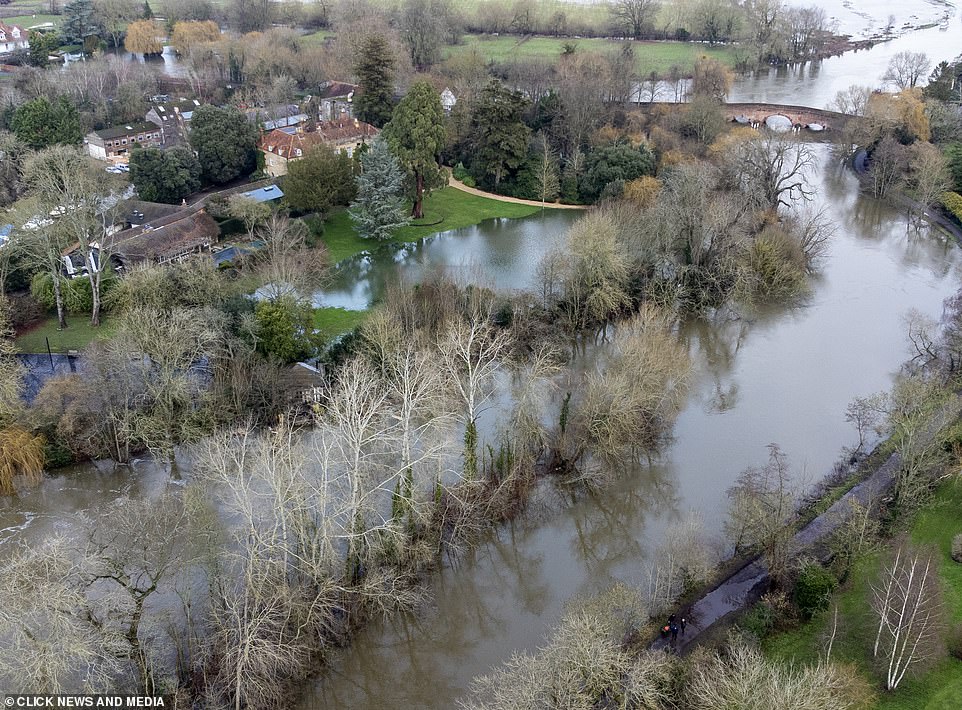 This latest floodwater has arrived amid extraordinary weather conditions causing chaos across the UK.

Earlier today a double-decker bus overturned in Somerset as temperatures plummeted across the country.

The major crash on the A39 in the south-west of England comes after treacherous conditions saw more than 100 car crashes in just a few hours as drivers struggled to cope with the sudden change in conditions.

Injuries were reported on the bus which was believed to be carrying around 80 people to work at Hinkley Point nuclear power station, though exact numbers have yet to be confirmed. 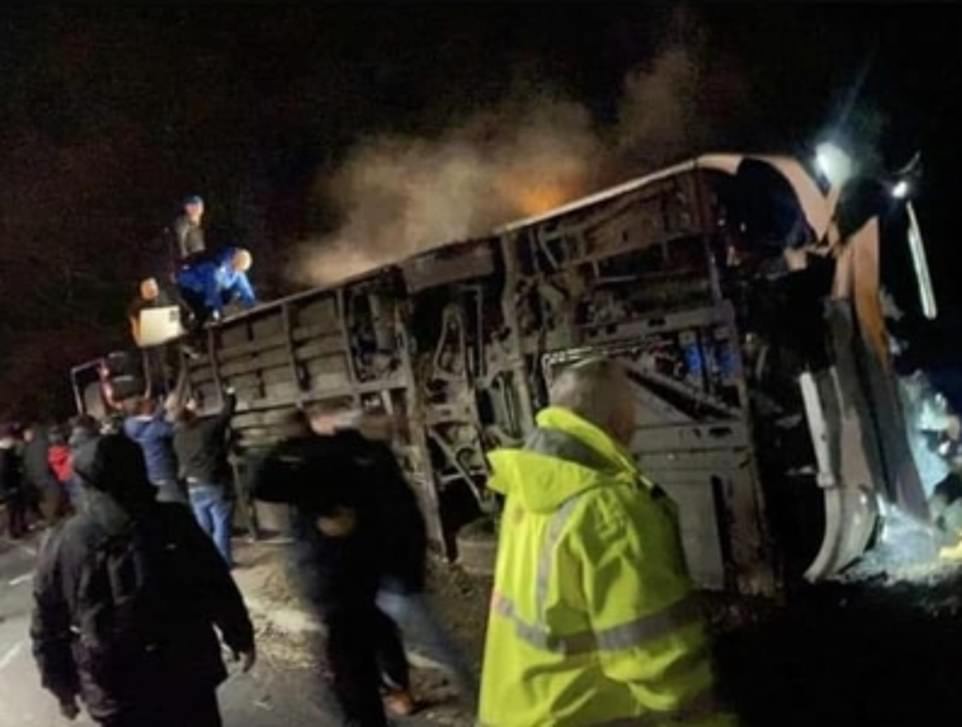 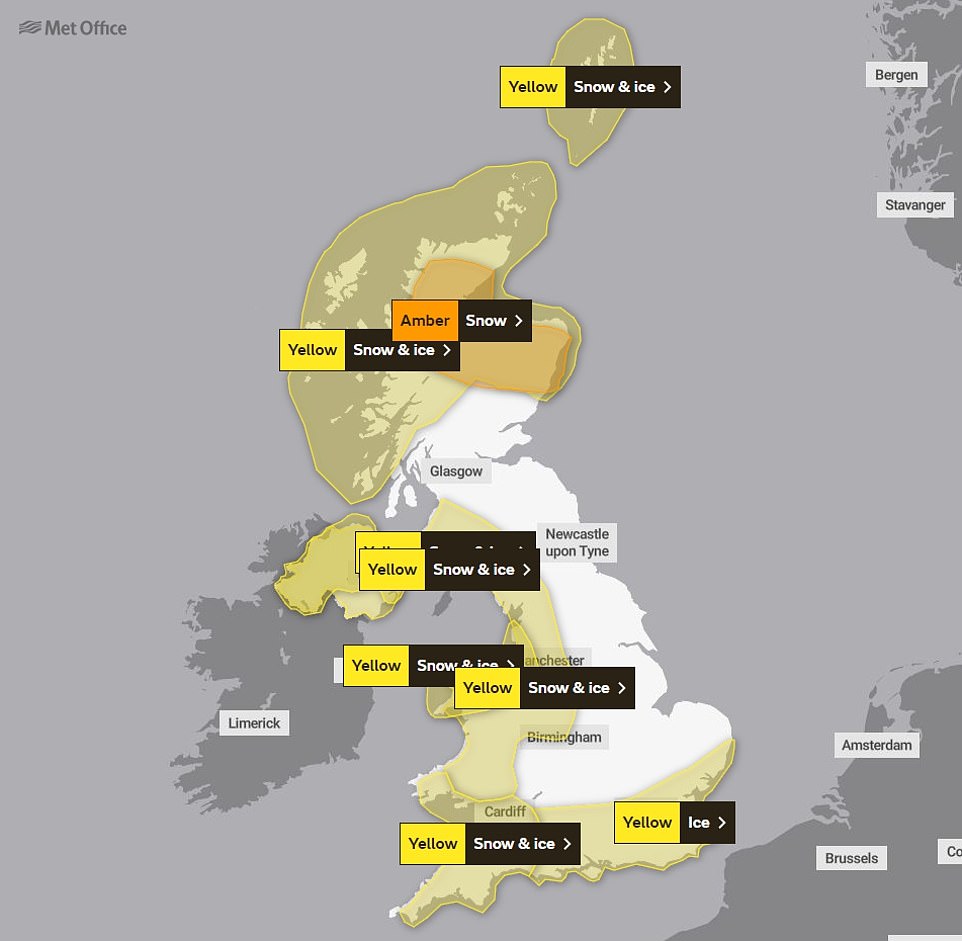 Yellow warnings are in place for Northern Ireland and Wales as well as large parts of England and Scotland. An amber warning for snow is in place in the Scottish highlands

A significant number’ of police, fire and ambulance emergency services rushed to the scene as a major incident was declared, while ‘many’ people were reported to be injured.

The Met Office has issued yellow warnings for snow and ice across southern England, parts of the northwest and north Wales, Northern Ireland and large parts of northern Scotland.