German fans should stay away from Wembley, country's doctors say

German fans should stay away from Wembley for their Euro 2020 showdown against England to make sure they don’t catch Covid, country’s doctors say

German football fans have been warned not to attempt to travel to Wembley for Tuesday’s Euro 2020 last 16 tie against England.

A senior official of the World Medical Association made the warning because of the highly infectious Delta variant of Covid-19.

‘Even a vaccinated person who follows the social distancing rules and makes a pilgrimage to the stadium is taking a limited risk,’ chairman Frank Ulrich Montgomery said.

Germany’s nail-biting 2-2 draw with Hungary put them into the knockout stages, where they meet England at Wembley Stadium in London.

Due to Covid-19 travel restrictions and the Delta variant in the UK, anyone returning to Germany from Britain must undergo a two-week quarantine and German nationals have been warned it is not worth the risk. 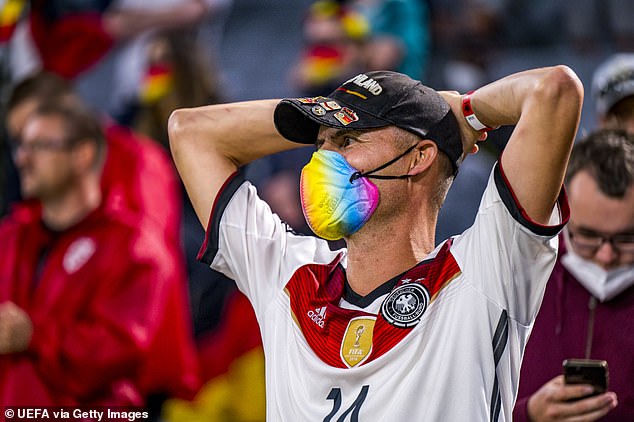 German football fans (pictured during last night’s match against Hungary) have been warned not to attempt to travel to Wembley for Tuesday’s Euro 2020 last 16 tie against England by a senior official of the World Medical Association, because of the highly infectious Delta variant of the Covid-19 virus 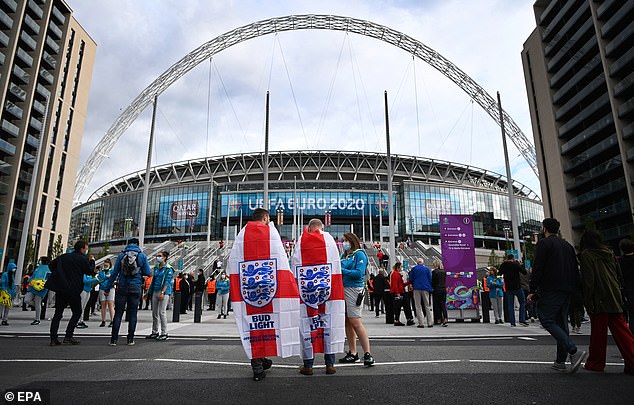 A senior official of the World Medical Association made the warning because of the highly infectious Delta variant of the Covid-19 virus. Pictured: England fans arrive at Wembley ahead of the Three Lions’ match against the Czech Republic on Tuesday

Professor Montgomery added to Bavarian newspaper Passauer Neue Presse: ‘Anyone who is unvaccinated is acting irresponsibly, given the Delta variant prevalent in the UK and its risk of infection.’

St George’s Park has today become the scene of a Covid scare after a Sky Sports journalist tested positive for the virus.

Sportsmail understands that the reporter was asked to leave the premises, along with a cameraman from the broadcaster.

What were already stringent controls have been stepped up following the shambles which saw Three Lions pair Mason Mount and Ben Chilwell forced to self-isolate for 10 days following a lengthy chat with Scotland midfielder Billy Gilmour after the 0-0 draw, with Gilmour subsequently testing positive.

From the start, medical staff are known to have identified the media as a potential risk to the biosecure bubble.

After a crowd of 25,000 for England’s group games, authorities have allowed 45,000 to attend the two last 16 matches at Wembley, equivalent to around 50 percent of capacity.

That will rise to more than 60,000 for the semi-finals and final at the same stadium.

‘I consider this to be populism and I can only advise against travel to see the games,’ added Montgomery.

‘I don’t understand why Prime Minister Boris Johnson is allowing this.’

The Government’s move, which was announced on Tuesday, means fans from Europe can attend the last two matches of Euro 2020 if they have a negative Covid-19 test or prove they are double vaccinated.

Under other changes to Covid travel regulations which were quietly imposed, top executives from Uefa and Fifa will be able to skip self-isolation requirements so they can attend games.

But the rules are also extended to cover ‘senior executives of sponsors and partners’ including international TV firms, and ‘other relevant figures’ including senior football figures and politicians from competing nations.

Downing Street yesterday said that it would not agree anything that ‘compromises the safety of the public’ and warned officials could be fined if rules are broken.

They are expected to isolate themselves away apart from attending certain events like the Euro 2020 final at Wembley on July 11, and national team training sessions

But the changes to the travel rules specifically allows them to attend ‘a meeting with ministers or a controlled event at Number 10’.

It also gives dispensation to attend other meetings ‘with the UK Government or the English Football Association’. 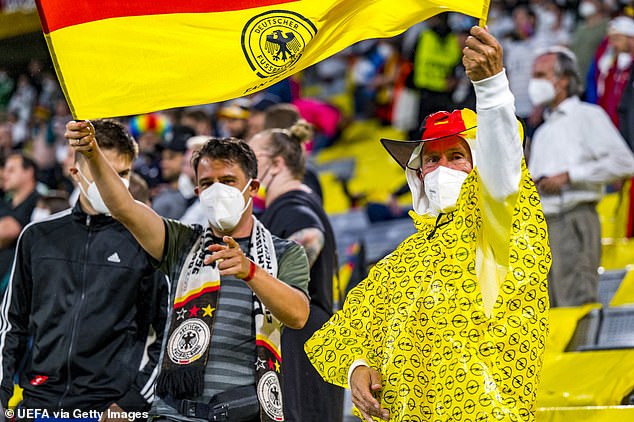 Germany’s nail-biting 2-2 draw with Hungary put them into the knockout stages, where they meet England at Wembley Stadium in London

It raises the prospect of bigwig being given a free pass to schmooze with senior politicians after waltzing into the UK without having to self-isolate, at a time when British tourists face strict curbs on foreign travel.

The Prime Minister’s official spokesman told reporters that discussions were still under way with Uefa and Public Health England over the ‘final detail’ of whether officials would be allowed into the UK for the semi-finals and final without having to quarantine.

But he said: ‘As I’ve said before, we wouldn’t do anything that compromises the safety of the public.

‘Those who are eligible to come will be subject to a strict code of conduct and you can expect that to include daily testing, staying in designated hotels, use of designated private transport and compliance with all other Covid restrictions, including social distancing, face coverings, and test, trace and isolation.’

Asked if they would face fines if these rules were breached, he said: ‘We’re updating on that… any breaches of restrictions would result in fixed penalty notice fines.’

Uefa is thought to be pushing for 2,500 VIPs to attend the competition’s final on July 11 without being subjected to quarantine requirements that apply to other international travellers.

The Times said the Government is approaching a compromise deal that would require Uefa and Fifa officials, politicians, sponsors and broadcasters to agree to only attend football matches – effectively placing them in ‘bubbles’.

But this guidance suggest the scope could be wider.

Many VIPs are expected to fly in and out of the country on the same day, or stay overnight in hotels block-booked for the tournament, the paper reported. 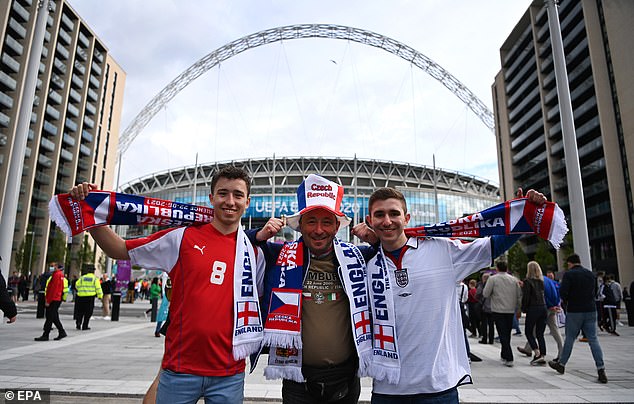 Due to Covid-19 travel restrictions and the Delta variant in the UK, anyone returning to Germany from Britain must undergo a two-week quarantine and German nationals have been warned it is not worth the risk. Pictured: England fans at Wembley on Tuesday

Culture Minister John Whittingdale said yesterday the officials will have to follow ‘strict restrictions’ when they are in the UK, with reports suggesting they will not be allowed to mix outside of ‘bubbles’.

He insisted the Government had listened to its scientific advisers who are ‘content’ for the move to go ahead.

Mr Whittingdale said ministers had ‘measured these things very carefully’ and the Government will not do anything that could put the nation’s coronavirus pandemic progress ‘at risk’.

Mr Whittingdale defended the approach as he told Sky News: ‘Well, we have listened very carefully to our own scientific advisers. They are content that we can move to this next stage.

‘And we have measured these things very carefully and we won’t do anything that will put our success at risk.