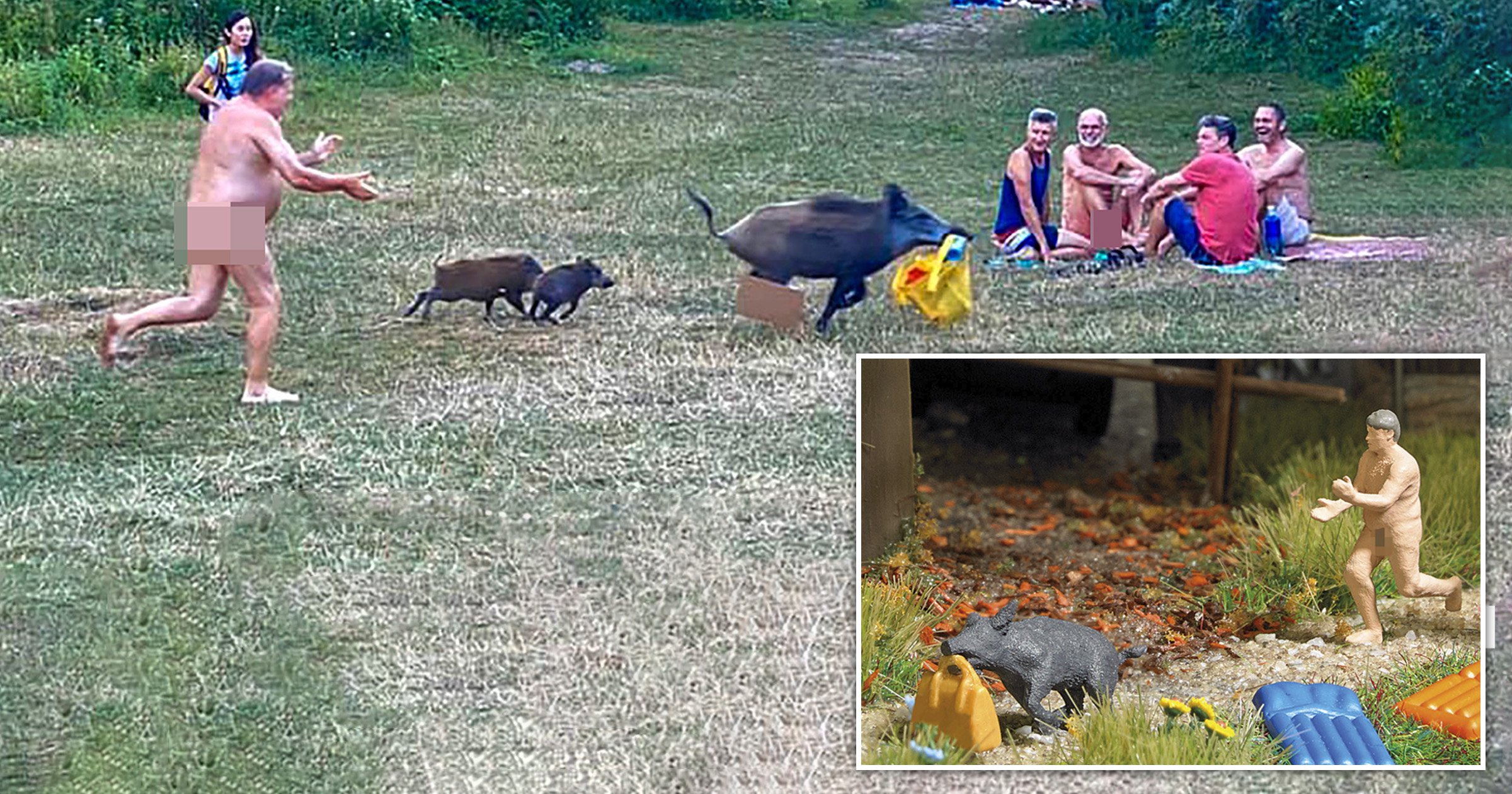 We all remember the iconic moment when a naked grandad chased a wild boar when it took off with his bag. And now, it can be remembered forever as… a toy.

The model, which is called ‘Action-Set: Wildschweinalarm’, has been launched by company Busch Modellbau which makes detailed miniatures to accompany miniature railway sets.

The firm wrote on its website: ‘For the realistic animation of your model world. Based on a true incident at Berlin’s Lake Teufelssee.’

The events made international headlines last August when the man was sunbathing at a popular nudist spot in Grunewald Forest, Berlin, when a trio of boars stole his bag.

They were looking for food, but it contained his laptop and he wasn’t willing to let it get away.

So he chased after the mum pig and two of her offspring in front of crowds of people – to whoops of laughter.

Soon after he emerged victorious out of the forest with his bag, and onlookers cheered.

The Teufelssee Lake is a popular destination for Berliners and it also allows nude bathing, known locally as FKK, in common with many other lakes in different parts of Germany.

Wild boar are a growing problem in Berlin, and the Landesverband Berlin which is responsible for managing the issue admits it is difficult to bring it under control.

The wild pigs have no significant natural predators and spend a lot of time digging up the soil damaging local flora and also regularly stage raids into built-up areas.

A spokesperson for Busch Modellbau said the product was selling well. The popularity of nudism is often reflected in miniature railway sets across the country.

Adele Landauer, who took the now-famous images and got permission from the subject to share them online, told the story at the time: ‘I was in sitting on the grass when I saw a wild pig stealing pizza from somebody’s rucksack while they were having a swim.

‘I thought it was really funny and I decided to grab my mobile phone and take a picture, I wanted to send it to my daughter in Los Angeles so she could show it to my granddaughter, who is aged two.

‘I don’t think she would have ever seen a wild pig and I wanted her to see what they were doing here in Germany.

‘Just as I picked up the phone though to take the image, suddenly another wild pig ran into view with its piglets following and carrying a yellow bag in its mouth. It was being chased by a man who was as naked as the day he was born.

‘The wild pig had stolen the bag, probably hoping that there was some food inside, but there wasn’t, it contained the man’s laptop. But the pig didn’t know that and was determined to make it to the nearby woods.’

Adele explained how several people had lost rucksacks that had been taken into the woods by the pigs who then ransacked them looking for food.

‘This man, however, was determined not to be a victim of the same thing,’ the life coach added.

‘He was determined to get the bag back, because it had his laptop in it, and after chasing it around the grass, he then followed it into the woods instead of stopping at the edge.

‘Everyone was standing around wondering what would happen, and then suddenly the man emerged with his laptop, and everybody started cheering. It was a really great moment.’

The man apparently said: ‘I’m just happy that I got my laptop back.’