Hamburg: The road to ambitious emission reductions targets might be paved with good intentions, but Europe seemingly didn’t factor in Vladimir Putin’s capacity to completely derail the path.

In Germany, which aims to cut carbon emissions by at least 65 per cent by 2030, its coalition government has been mugged by reality as it confronts the threat Russia will further cut off gas flows as it grows increasingly angry to sanctions imposed for its war in Ukraine. 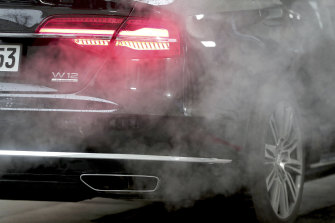 Gases rise from the exhaust pipe of a luxury Aldi parked with the engine running outside de Chancellery in Berlin.Credit:AP/File

European gas prices have soared 50 per cent in the past week and the shortfalls are making it hard to refill gas storage before the northern winter. There is now an open conversation about rationing resources and even paying families to conserve energy.

Having pledged to shut down its remaining coal-fired power plants by 2030, Germany will now fire up 10 gigawatts of mothballed plants, adding to its carbon emissions, which have rebounded since 2020.

Despite its eight-year timeline to quit coal, it remains as hopelessly and compromisingly addicted to it and Russian gas as an energy source. Coal-fired power plants made up more than 28 per cent of the country’s gross electricity generated last year. Renewable sources powered 41 per cent of output with natural gas and nuclear covering roughly half the balance each.

And while energy experts are urging Berlin to keep its nuclear plants open, it is continuing with its rapid campaign to shut them down. 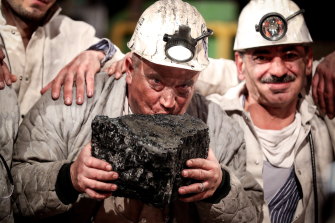 Miners kiss the last piece of coal during a farewell event for the German hard coal mining industry in 2018.Credit:EPA

Sweden and Denmark have followed Germany, Austria and the Netherlands in announcing emergency plans to preserve gas supplies last week. In all, 10 European Union states have now declared early warnings of a gas emergency. The Dutch joined the Germans and Austrians this week in reverting to coal power.

For years, the United States warned Germany and Europe of building up a dangerous energy dependence on Russia, the source of more than half of its fossil fuel imports. Now that the war in Ukraine has shocked Berlin into the same conclusion, the government is finding it might be too late to change course.

Europe’s largest economy has managed to reduce the share of its Russian natural gas from 55 per cent before the invasion to 35 per cent. But at the same time its new government, a coalition between the Social Democrats, Liberals and Greens, aims to shut its nuclear plants within 18 months instead of the previous government’s target of 2038.

It threatens deep divisions in Chancellor Olaf Scholz’s ministry, with sceptics even calling for him to abandon the country’s pledge to ban new sales of petrol and diesel cars by 2035.

Fatih Birol, the head of the Internation Energy Agency, said this week Europe should be ready in case Russian gas was completely cut off.

“The nearer we are coming to winter, the more we understand Russia’s intentions,” Birol told the Financial Times in an interview. “I believe the cuts are geared towards avoiding Europe filling storage, and increasing Russia’s leverage in the winter months.”

Birol said emergency measures taken by German this week to fire up coal power and reduce gas demand, were justified by the scale of the crisis despite concerns about rising carbon emissions.

He said the increase in coal-fired generation was “temporary” and would help preserve gas supplies for heating in winter. Any additional carbon emissions from burning highly polluting coal would be offset by an acceleration in Europe’s plans to cut its reliance on imported fossil fuels and to build up renewable generation capacity, he added.

He said countries should try to delay shutting down any nuclear power facilities earmarked for closure to help limit the amount of gas burnt by electricity generation.

The European Commission noted last week that “some of the existing coal capacities might be used longer than initially expected” because of the new energy landscape in the Continent.

“We know that the energy mix and the plans of member states will adjust slightly because we are in an unexpected situation,” commission spokesman Tim McPhie told journalists.

In facing such a scenario, governments have a responsibility to keep the lights on, hospitals open and factories running. Not doing so would clearly cause misery for millions and potentially plunge nations into recession.

And it could severely damage popular support for measures to help rapidly decarbonise economies and avoid catastrophic global warming.

The challenge is that to meet those pledges, coal’s return must be short-lived amid the need to switch to clean energy. And it’s clear that to reduce coal-burning and abandon Russian gas, existing nuclear plants must be kept operating as long as possible.

Berlin cites technical reasons for not rebooting its nuclear plants, but the biggest argument could be political, especially for the Greens, who control the Economy Ministry.

Europe is learning that there are no easy choices when it comes to supporting the vulnerable, standing up to oppressors and combating climate change.