POLLEN levels are set to soar across the whole of the UK this weekend.

It could cause misery for the one in five Brits who suffer with hay fever, according to NHS figures. 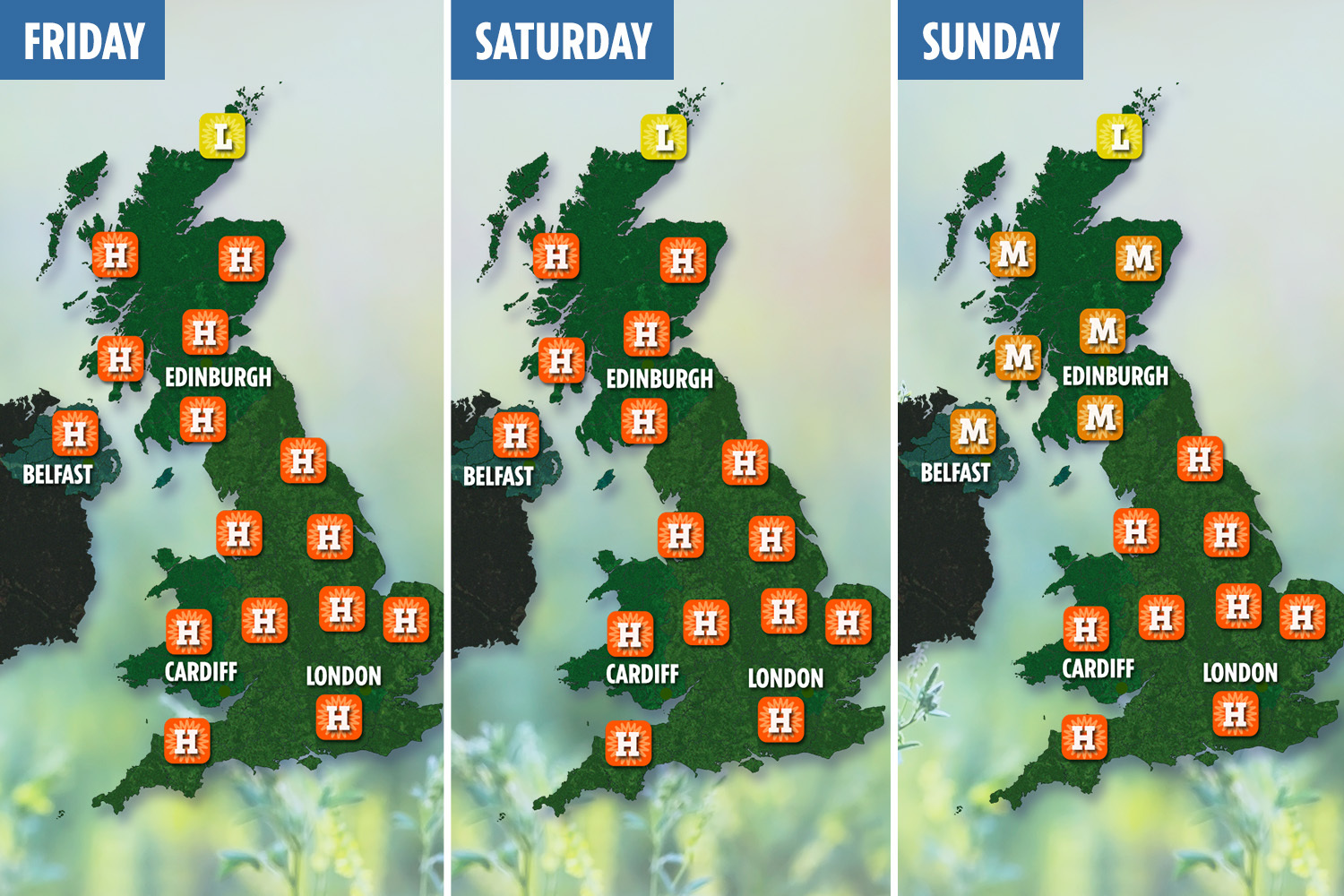 Some parts of the UK are set to see high pollen for several days, the Met Office forecasts.

Today everywhere other than the East, South East and East Midlands (England) will have a high pollen count.

But come Friday, high levels will be UK-wide, with the exception of the Scottish Orkney and Shetland Islands.

It will remain the same over Saturday, as the Met also predicts the weather will by dry and even sunny for most of the  UK.

By Sunday, Scotland will drop to a medium pollen count, but the whole of England and Wales will still be blanketed by pollen.

It comes as people across the UK get ready to enjoy the first weekend of new freedoms.

In England, outdoor pub seating, gardens and dining are set to be packed now that groups of six can go for a meal or drinks together outdoors.

In anticipation, thirsty Brits have made 14 million pub bookings in a stampede to secure beer garden tables as lockdown restrictions lift.

From Friday, people in Scotland can meet up outdoors in groups of six, which is also already in allowed in Wales.

But those with hay fever have been warned of triggering their symptoms unless they stay indoors.

Hay fever can cause sneezing, a runny nose, itchy eyes and fatigue.

It can also cause a loss of smell, which has become recognised as a key symptom of the coronavirus.

Experts have previously warned people not to brush their symptoms aside as being caused by hay fever, when they could in fact be caused by Covid. 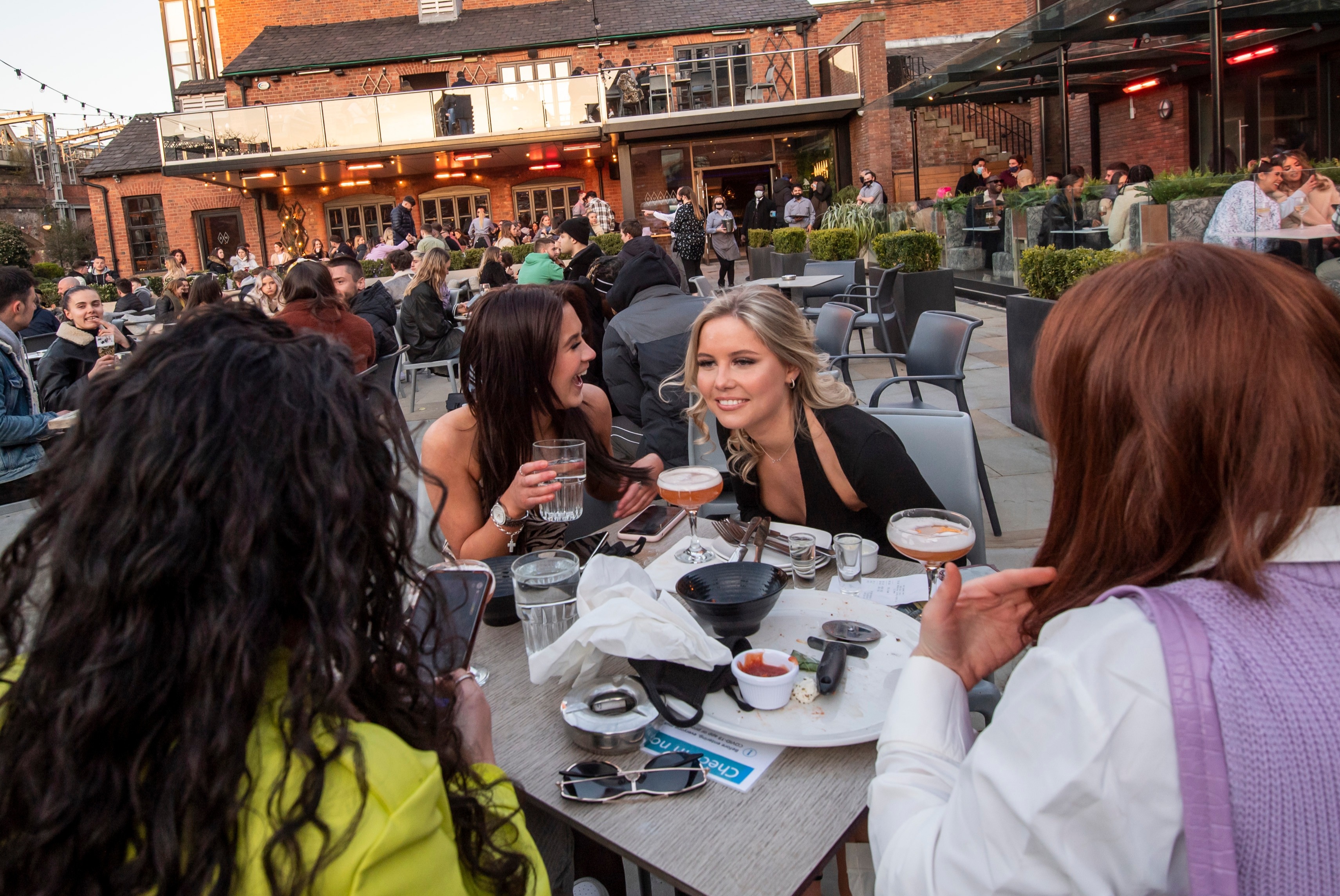 The two main types of pollen which affect the majority of people with hay fever are tree pollens and grass pollen.

Tree pollen is reaching its peak season now, with birch and ash pollen in the air during dry and mild sunny weather.

Plane pollen is also now in season in some cities in the West, and South West. While further north, in Yorkshire and some parts of Scotland, willow pollen is rife.

It won't be until the summer months that grass pollen hits the UK, starting in May.

Symptoms of grass pollen are most severe in June.

How to prevent hay fever, according to experts

There are plenty of products you can pick up at the chemist to keep your symptoms in check, each with different abilities.

Antihistamines block the action of a chemical called histamine, which the body releases when it thinks it's under attack from an allergen.

“As this is a drowsy medication, it can be beneficial to improving sleep quality that may have been otherwise impacted by hay fever symptoms."

But for those who could endager themselves if they are drowsy during the day, he recommended non-drowsy tablets such as Loratadine and fexofenadine [Telfast].

If you’re struggling with a blocked, itchy or runny nose, a steroid nasal spray might provide you with some extra relief. They work by reducing the inflammation inside the nose.

Dabbing some balm, such petroleum jelly like Vaseline, around the nostrils and bones of the eyes acts as a barrier against pollen.

It traps the pollen before it gets in the body and starts to cause a reaction.

Max Wiseberg, airborne allergens expert and creator of hay fever balm HayMax, said: “It is a great idea to create your own first aid kit and take it with you everywhere with one or more natural products, one antihistamine, one steroid nasal spray and eye drops, can prove very effective, especially when pollen counts are very high or you suffer with severe symptoms.

“Always ask your GP or pharmacist before combining treatments.”

2. Choose the right food and drinks

For an alternative home remedy, you could try some traditional methods based on diet.

Max said eating a very hot curry bursting with spices can reduce inflammation caused by the enzyme phospholipase A2, which is provoked into action by pollen in your system.

“And make sure there’s lots of onions in too, as they contain quercetin, a natural anti-histamine, which blocks the effects of histamines”, he said.

“The best type are red onions, as they have the highest levels.

“Drinking hot tea with lemon and honey first thing in the morning is said to activate movement of the nasal cilia, which helps prevent early morning sneezing with allergies or hay fever.”

3. Get enough sleep in clean sheets

Research has shown people who get at least seven hours of sleep have fewer hay fever symptoms than those who get five.

If it's difficult to nod off due to a sniffly nose and itchy eyes, having a shower before bed to make sure you’ve removed any pollen particles from your body.

Pollen can stick around for a while on your skin and hair even after you've gone back indoors.

Similarly, the bed can cause aggravation if pollen has attached to the sheets or pillow after coming in through the window.

Cover your bed during the day with a sheet and turn your pillows over before you sleep.

When pets like dogs, cats and bunnies return to the comfort of your home, they bring this pollen with them where it transfers to clothing, furniture, carpets and bedding.

Try a pet friendly shampoo on days when the pollen count is high to keep your animals free of plant particles.

Max said a romping session could help you get on top of hay fever – although this is not proven.

“This is because, at the point of orgasm the sympathetic nervous system constricts blood vessels across the body and an Iranian neurologist has suggested that this could help with hay fever.”

6. Cut down on booze

Beer, wine and other spirits all contain histamine – the chemical that sets off allergy symptoms in the body.

Sick of fighting against runny eyes? The Met Office recommends sticking to the soft stuff where possible to avoid adding any unnecessary allergy pressure.