Follow
Home » World News » Good trolls: The choir that sings under a bridge

Good trolls: The choir that sings under a bridge

Under a bridge is not the obvious place to find a choir performing, but if you brave the wilds of Coburg one night, you might be lucky and stumble across an outfit called the Trolls.

On a dark, cold Wednesday at 7.30pm, they’re a beacon of light and warmth, sweetly harmonising to gospel and soul tunes and even a lullaby, as cyclists and dog-walkers shuffle sheepishly past. 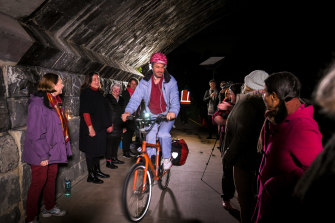 The 20 songsters stand amid tea candles beside Merri Creek, under a 150-year-old bluestone bridge, a cavernous space that has great acoustics.

Trolls, in general, have a bad reputation, either as internet hate peddlers or as mythical Old Norse monsters living in caves or under bridges.

Director Sue Johnson said that shortly after the choir formed 11 years ago, a cheeky cyclist powered past, then shouted back, “You should call yourselves the Trolls.”

The name stuck, although the choir’s mission is for good, not evil. “And we don’t eat billy goats,” added Ms Johnson. 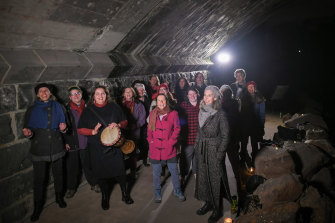 Director Sue Johnson (holding the drum) with her choir, the Trolls, singing under the Murray Road bridge in Coburg.Credit:Eddie Jim

The choir rehearses at the nearby Newlands senior citizens’ centre and discovered the space, under Murray Road near the former Pentridge Prison, after heading outdoors one fine evening.

Ms Johnson loves the idea of singing under the bridge, and of being secret. “Like no one driving their cars above would even know we’re there.”

Tonight, after a few whimsical warm-up harmonies, the songs have a “bridge vibe” such as an upbeat soul song penned by Ms Johnson called No Turning Back. During the rendition, a north-bound jogger duly turns back, before reaching the choir.

A couple with a dog and pram walk past, heads down. A big man in battered overalls cycles past, with a wide grin on his face.

Next is the traditional gospel song The Storm is Passing Over, sung while light rain falls, and then the meditative Midnight Lullaby by Tom Waits.

On other nights, they might sing Blackbird by the Beatles or Into My Arms by Nick Cave and the Bad Seeds.

The songs Under the Bridge by the Red Hot Chili Peppers and Bridge Over Troubled Water by Simon and Garfunkel, are on Ms Johnson’s “to do” list.

Cyclist Tim Gray, 37, of Brunswick, found it “a bit weird” to come across a choir singing under a bridge beside a creek, at night.

“I was wondering what they were doing,” he said. “But it’s nice and peaceful.”

Longtime choir member Carmen Lahiff-Jenkins, 47, of Reservoir, raves about the time, at dusk three years ago, that a platypus surfaced in the creek in front of the choir, mid-song.

“We’d hit this sweet spot when everybody’s sound blends together, and we all looked over, and popping out of the water was this silky wet head. “It floated and stared at us and when we finished, it flopped back into the water,” she said.

“It was amazing,” affirms Ms Johnson. “We felt that the singing brought that platypus out.”

The choir can be contacted via www.suejohnson.com.au

choir, good, Si, That, the, trolls
You may also like: