Michael Gove, who MPs suspect privately backs the former Chancellor, has been accused of masterminding the sleeper cell to fragment the Tory Right.

Ms Badenoch emerged as a surprise contender in the leadership race after being boosted by Mr Gove’s early support. But senior Conservatives are urging her to fold into Liz Truss’s campaign – or risk the Right of the party being excluded from the final round. Ex-Brexit Minister Lord (David) Frost has publicly called for Ms Badenoch to stand aside.

According to a senior Conservative MP, Mr Gove is a Rishi supporter but ‘cannot keep out of the political games – it is in his nature. He takes positions simply to cause trouble.’ 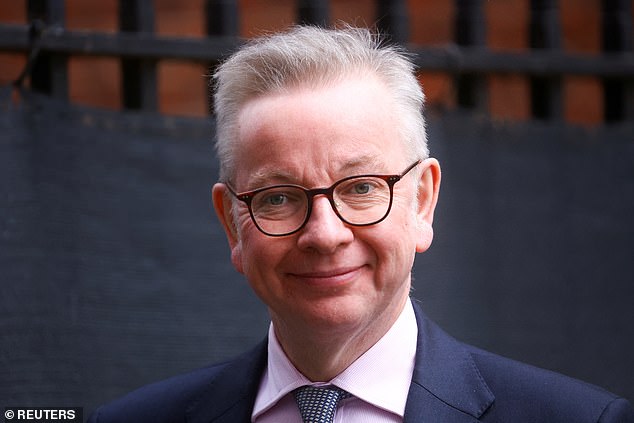 The same source added that Mr Gove will leverage Ms Badenoch’s unexpected success to negotiate a top Cabinet job with Mr Sunak. ‘He knows Kemi will pack up and he will be able to come over. He can’t bear not to be in the Government.’

Insiders pointed to the fact that less than half of Ms Badenoch’s voters have gone public. Others questioned the true loyalty of her backers, including Robert Courts, who had previously been a key supporter of Grant Shapps’s leadership bid. Mr Shapps came out for Mr Sunak after giving up his own run.

A former Cabinet minister said Mr Gove is ‘Machiavellian’ and agreed that he will be using Ms Badenoch’s position as number four in the race to ‘horse trade’ this weekend and argue for a leading post in Mr Sunak’s administration.

The source said Mr Gove could be in a position to ask to be Chancellor as his price for bringing enough MPs over from Ms Badenoch to guarantee Mr Sunak a spot in the final two.

Meanwhile sources in Ms Truss’s campaign expect 22 of Suella Braverman’s 27 backers to switch to the Foreign Secretary now that Ms Braverman has been eliminated from the race.

An ally of Mr Gove said his support of Ms Badenoch is genuine and he has praised her abilities ‘for a long time’ but admitted it is ‘feasible’ that he also backed her to split the Right of the party.

A Badenoch campaign source said claims of a dozen sleeper Sunak supporters in the ranks are ‘complete hogwash’. Her allies have insisted she will not fold into Mr Sunak’s campaign and that she is ‘in it to win it’.