Greek Prime Minister Kyriakos Mitsotakis on Monday attacked a media report that the state targeted mobile phones of some of his ministers with spyware, calling the allegations an ‘incredible lie’.

Left-wing weekly newspaper Documento reported on Saturday that the mobile phones of 33 high-profile public figures had been targeted illegally by spyware known as Predator as well as technology employed by state intelligence agency EYP.

Among the alleged victims were the current foreign and finance ministers, former premier Antonis Samaras, journalists and business executives including Vangelis Marinakis, the owner of Olympiakos and Nottingham Forest football clubs. 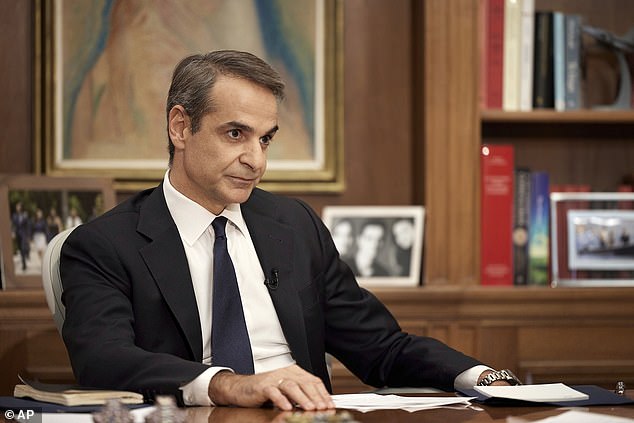 Greece’s Prime Minister Kyriakos Mitsotakis is pictured in his office in Athens on Monday. He hit out at a media report that the state targeted mobile phones of some of his ministers with spyware, calling the allegations an ‘incredible lie’.

‘It’s an incredible lie. We have a publication revealing a series of people allegedly under surveillance without the faintest proof that that was actually happening,’ Mitsotakis told private channel Antena1.

‘I have never claimed there wasn’t any surveillance. It’s another thing to accuse the prime minister of orchestrating this action,’ he added, calling the accusations ‘shameful’ and ‘unacceptable’.

Left-wing opposition party Syriza has demanded an explanation and threatened to mount a no-confidence motion before the next elections due in 2023.

The scandal broke in July when Nikos Androulakis — an MEP and leader of the Socialist party (PASOK) — filed a complaint over alleged attempts to tap his mobile phone using Predator spyware.

Two journalists and another senior opposition politician also claim to have been spied on.

The scandal forced the resignations in August of the intelligence agency boss, and of a close aide and nephew to the prime minister.

The government has flatly denied using illegal surveillance software but admitted the state intelligence service monitored Androulakis, without saying why. 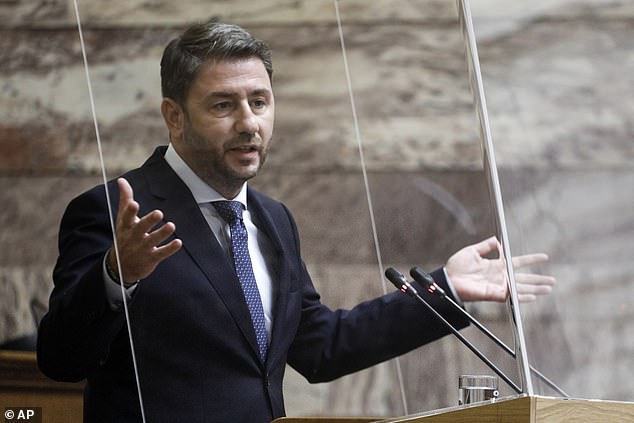 Nikos Androulakis, head of the opposition socialist PASOK party, who is also a European Parliament member, speaks during his party’s meeting at the parliament in Athens, Greece, on Aug. 25, 2022. A European parliamentary committee investigating the use of spyware in the 27-country bloc urged Greek officials Friday to do more to shed light on a phone surveillance scandal that targeted Androulakis and journalists