Boston: They may have tried their best to derail the Prince and Princess of Wales’s three-day visit to Boston.

But in the event, royal aides welcomed the release of a slickly produced Netflix trailer, packed to the brim with high-end drama from the Duke and Duchess of Sussex, which only seemed to widen the gulf between the two camps. 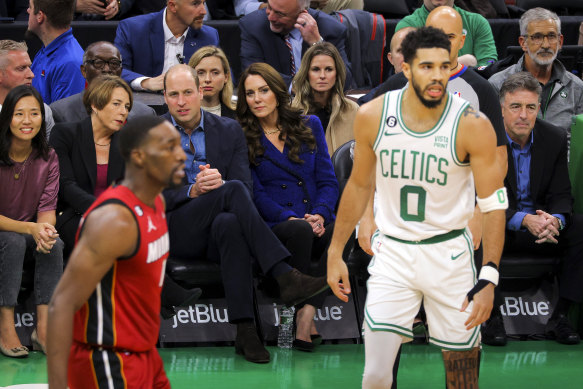 The Prince and Princess of Wales attend an NBA game between the Boston Celtics and the Miama Heat during their US visit. Credit:Reuters

While Prince Harry and Meghan continued to paint themselves as victims, heads in hands, tearing their hair out at the unfairness of it all, the Prince and Princess were simply getting on with the job.

Out and about in Boston this week, the couple did what they set out to do: shine a light on climate change, roping in high-profile celebrities – including David Beckham and Billie Eilish – along the way.

They were greeted by large crowds, many of whom waited hours in biting temperatures and torrential downpours. There were tears, clasped hands and declarations of love.

“As one mother to another, we can always learn from each other,” one fan told the Princess. “She is such an icon for women,” said another after meeting her. Harry and Meghan’s dramatic Netflix trailer was released just 24 hours before the Prince met US President Joe Biden yesterday, an engagement that only served to elevate his position on the global stage. 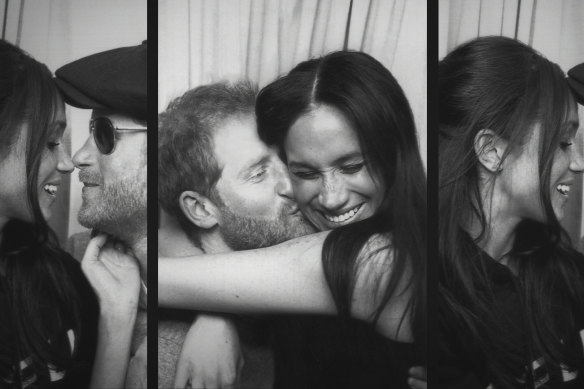 Prince Harry and Meghan, Duke and Duchess of Sussex in an image released by Netflix.Credit:AP

Biden had been keen to make the meeting happen after a last-minute diary change saw the 80-year-old president travel to the Massachusetts city for a political fundraiser.

“We’ve done everything that we wanted to do and the reception here in Boston has been extremely positive and well received,” one source said. “It concluded with the Prince meeting Mr Biden, really positioning himself as a global leader, focused on how we solve the world’s climate problems.”

The Sussexes’ apparent determination to focus on the struggles of the past is met with a mixture of amusement and bewilderment by palace aides. In America, the documentary project, forthcoming memoir and magazine interviews simply perpetuate the notion that they are celebrities rather than statesmen.

Last week, some 3000 miles from California, the Prince and Princess were looking to the future, presenting themselves as “changemakers”, a powerful couple on a mission to create a better future. 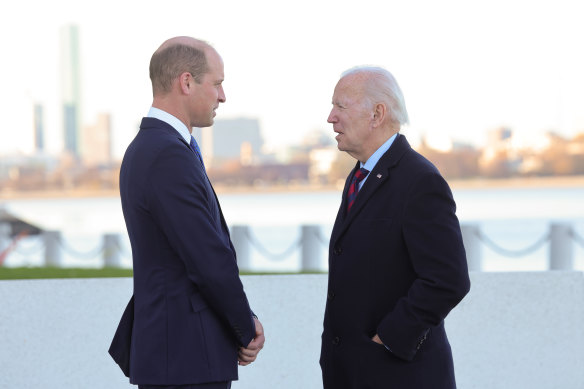 In doing so, they hopped effortlessly from job to job; turning local landmarks green, fist bumping basketball fans at a Celtics game, meeting climate tech entrepreneurs, and posing for selfies during an impromptu walkabout with hundreds of well-wishers at a youth violence charity. “Their itinerary and past actions suggest Kate and William are people of conscience and admirable values,” wrote columnist Kevin Cullen in The Boston Globe.

As always, the Princess let her wardrobe choices do the talking, opting for sharply-tailored business suits by largely British designers, including Roland Mouret and Alexander McQueen.

Tamara Abraham, the UK Telegraph’s senior fashion editor, said: “Opting for suits, beside William in suits, has ensured they are positioned as equals. “This has been very different from a traditional royal tour – it has so much more purpose in Earthshot and the Princess’s wardrobe reflects that. She is no Diana arm candy. As a couple, they are selling us an image of a professional power couple, while the Sussexes are selling us their love story.”

But rarely have such hurdles been thrown in the royal path. 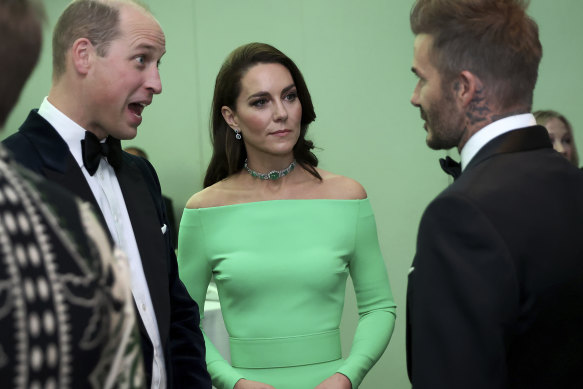 The Prince and Princess of Wales chat with David Beckham at the Earthshot Prize.Credit:AP

What was expected to be a straightforward business trip focusing on pet issues and culminating in the Earthshot Prize award ceremony perhaps attracted more attention than it otherwise would have for all the wrong reasons. Before they left the UK, a source close to the Prince and Princess issued a prescient disclaimer: they would let nothing distract from their trip.

The comment was aimed sharply at the Sussexes, who are no strangers to grabbing headlines, but Kensington Palace could never have predicted that the highly sensitive, three-day visit would collide with not one, but two dramas on the royal stage.

The first, a damaging race row and the resignation of Lady Susan Hussey, the Prince’s godmother, threatened to cast a long shadow over not just the trip but the wider institution.

The second drama perhaps could have been foreseen, such is the froideur between the Kensington Palace and Montecito-based branches of the Royal family.

Team Wales was convinced the release of a slickly-produced Netflix trailer was deliberately timed to derail their US trip.

A tweet from Omid Scobie, the Sussexes’ biographer and chief cheerleader, could not have been more provocative if it tried.

Referring to the fact that the Earthshot Prize has become so significant to William it has been hailed his “Super Bowl moment”, he wrote of the one-minute video clip: “If tomorrow is Prince William’s Super Bowl, then here’s your half-time show.”