Harry Kane “please stand up for us workers 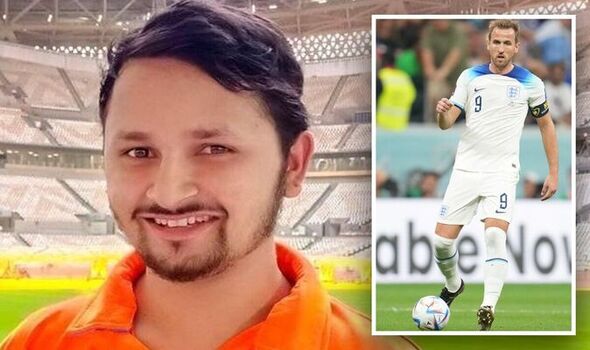 Anish Adhikari worked for three years in Qatar to pay back the loan he took out to pay back recruitment sharks. After mounting interest, he is still in debt. Mr Adhikari comes from Khotang District, a remote hilly region in the East of Nepal. He was 21 when he first migrated to Qatar to earn a living for his 14 family members who were unable to find work in their country.

It was 2018 and Mr Adhikari arrived in the Gulf country with “hope” but instead of being given the work he was promised, he was not paid his wages and was forced to return to his village.

Quite quickly, expenses began to mount up. In 2019 another recruiter came to visit him, promising Mr Adhikari that if he returned to Qatar he would be able to work inside the new World Cup Stadium away from the glaring sun. Thinking of his family and the outstanding loans they still hadn’t paid off, he made the difficult decision to put his trust in this recruiter and return to Qatar for a second time.

He was forced to pay another recruitment fee that covered his flights and the fees from the agency. His intention was to pay off that fee at the same time as working to send money home to his family but when he arrived in Qatar he realised he had been “deceived”. The job Mr Adhikari had been promised inside the stadium was not available, he was forced to work long hours outdoors loading and unloading heavy building materials from vehicles, for a meagre sum. The 750 Qatari riyals (£171) he was paid each month did not include food which was then deducted from his monthly salary leaving him with just 650, 200 less than he had been promised. He had no choice but to keep working: with the interest from his loan mounting up all he could do was work and hope he’d eventually pay it off. Three years later, he still hasn’t paid off the loan.

Sitting in an office in Kathmandu after finally returning back to Nepal one year ago, Mr Adhikari told the Express:

“I am a big football fan myself and at first, I was always hopeful I could make money and that’s why I decided to migrate but whatever hope I had was not fulfilled because when I arrived in Qatar I was not paid the salary I was promised.

I felt very bad. Even if I wanted to come back home the company would not allow me to.”

Mr Adhikari said this is common for other migrant workers like him. He felt “deceived” by the company that had promised him work. No matter what he did, he was stuck. In November 2021 the company Mr Adhikari worked for forced him to leave Qatar despite having four months left on his visa, it was after the company did not renew his identity cards, effectively leaving him undocumented.

He explained that although migrant workers are not supposed to pay recruiters a fee the practice is “rampant”. Mechanisms are in place to help these workers, but penalties are rarely enforced by the Nepal government which means these “deceptive practices” continue.

James Lynch, a coordinator at the human rights research and advocacy organisation Fair Square, said: “outward migration can be quite competitive. There are more people who want jobs that are available in Gulf nations. People end up paying for their own recruitment and start their journey in debt because it’s seen as an investment.”

Around 500,000 Nepalis join the Nepali labour market every year but only a few thousand get employed inside the country. As a result, hundreds of thousands of Nepalis seek employment in foreign countries as what Rameshwar called “a last resort”.

Equidem has collection statistics showing that the Nepal government issued over 630,000 labour permits in the recent fiscal year (from 16 July 2021 to 15 July 2022). That’s a total of 55.8 per cent of the households in Nepal who receive remittance – money that migrant labourers send home to their families and subsequently goes back into the local economy. Equidem found that the remittance sent by these workers is worth over 25 % of the gross domestic production (GDP).

It’s not just in Nepal but also in India, Bangladesh and Sri Lanka where competition for jobs is fierce and there is widespread inequality, poverty and a lack of opportunity in the local labour market. As a result, some migrant workers return home in debt to the recruiters they have paid to land them work in Gulf nations but, Mr Lynch said, they’re not always offered the help they might need from embassies who are reluctant to lose the remittances.

It’s for this reason that Lynch is lobbying for FIFA to pay remittances to migrant workers like Mr Adhikari. In May, Human Rights Watch, Amnesty International, and FairSquare, along with a global coalition of rights groups, unions, and fan support groups, launched the #PayUpFIFA campaign demanding that FIFA provides financial compensation to those who have lost lives and livelihoods in the process of building a stadium that will bring huge profits to FIFA and its investors. FIFA has not responded.

Since the start of the tournament, FIFA has had to deal with mounting pressure from media and human rights organisations with questions about the human cost of creating the infrastructure needed to host the World Cup in Qatar.

Mr Lynch continued: “I think what’s been encouraging and positive is that people who have influence in the game are flagging the issues migrant labourers face. I think that fans who are concerned about these issues can support the petition for the compensation call and people will have their own personal reflections on how they engage with this tournament.

“Maybe the positive taken here is that likely future world cups will look more carefully at what has gone in to make it happen and that has to be a good thing.”

Mr Adhikari urges England fans watching the game either from home or from the stadium not to forget him.

He said: “Many workers go through the similar similar challenges that I have faced. So my expectation is if the company or the Qatari government could understand or the if they could do something then that would be helpful.

“I see star players coming to the stadium like Harry Kane, Messi and Ronaldo could you please raise the concern for the issues that labour workers have faced? If you could ask the authority to pay the money and to raise the concerns then perhaps we would be paid for our labour. So my message to the players is, please stand up for us workers.”