Former High Court judge Kenneth Hayne has dismissed concerns by conservatives such as Tony Abbott that the Indigenous Voice to Parliament could lead to litigation or derail parliament, saying the fears are “baseless” and a “column of smoke”.

Hayne, who was nominated for the court by former Liberal prime minister John Howard and who ran the banking royal commission, told a panel on Friday he did not share the view that the Voice would be able to veto decisions of the parliament or open it up to legal challenges in the High Court. 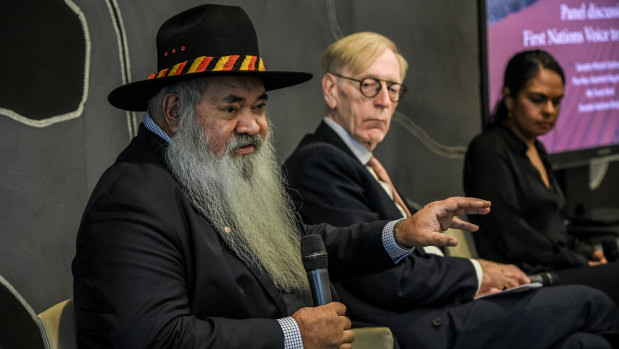 Senator Patrick Dodson along with former High Court judge, Kenneth Hayne and Aboriginal lawyer and advocate Teela Reid discuss the government’s Special Envoy on the Implementation of the Uluru Statement from the Heart and The Voice referendum at Arnold Bloch Leibler.Credit:Justin McManus

Abbott, a key opponent of the proposed Indigenous Voice, has raised concerns that it could change the way government works “because a particular group will have an unspecified say, over unspecified topics, with unspecified ramifications”.

Hayne said anyone could start litigation, including constitutional litigation, but that the courts had always shown a reluctance to interfere in the internal affairs of parliament. Using that as a reason to advocate a no vote was to rely on “a column of smoke with no substance”.

Hayne said it would be up to parliament to decide what to do when the Voice makes representations and that even if there was litigation, the High Court doing its job was not reason enough to vote no.

“I think the more you look, the less you see. I think the fear is baseless,” he said at the panel at law firm Arnold Bloch Leibler. 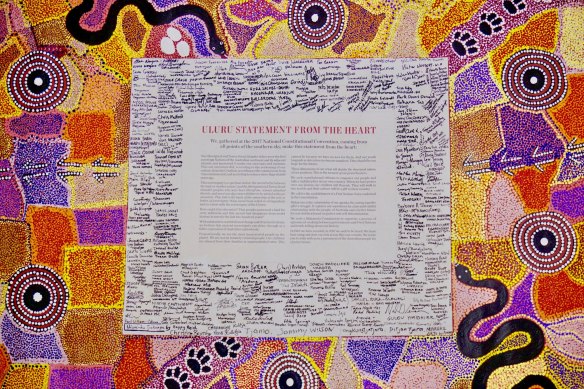 The Uluru Statement from the Heart.

The Indigenous Voice to Parliament was the first key policy proposed by the Uluru Statement of the Heart, and would be an advisory body of Indigenous people to express expert knowledge and give feedback to parliament on policy and legislation that would affect them.

Implementing the Voice requires amending the Constitution and would require a referendum, which Prime Minister Anthony Albanese said would not happen before mid-2023.

In August, Albanese proposed that if the referendum succeeds, three sentences would be added to the constitution: one that enshrines the Voice, one that sets out its responsibility to make representations to the parliament and one that empowers parliament to make laws on how the Voice would function and be created.

Liberal senator Andrew Bragg said there would be “multiple voices with multiple positions” within the Liberal Party and he could not say when it would decide whether MPs would be free to campaign on the referendum until the final wording was settled.

Bragg urged the parliament to establish a joint standing committee to explore the wording and provisions. A committee could help establish a consensus.

“I mean, we’re not ready, frankly, not enough work has been done to enable us to be able to have a comprehensive discussion internally.”

Labor senator and Special Envoy for the Indigenous Voice, Yawuru man Patrick Dodson said the calls for more detail about the proposal was “a bit of a misplaced debate” because it would be “determined through the normal hurly-burly of Parliament”.

“We’re not interested in adversarial party politics, this is an invitation to the people of Australia and requires a national response,” he said.

The Uluru Statement from the Heart asked for two new institutions: the Indigenous Voice to parliament and a Makarrata Commission to oversee treaty-making and truth-telling. It also noted that the sovereignty of First Nations people was ongoing and had never been ceded.