Kyiv: Ukraine claimed to have destroyed bridges and ammunition depots and pounded command posts in a surge of fighting in the Russian-occupied south, fuelling speculation on Tuesday that its long-awaited counteroffensive to try to turn the tide of war is underway. Russia said it inflicted heavy casualties in return.

The clashes took place in Ukraine’s Kherson region, where Moscow’s forces rolled up major gains early in the war. 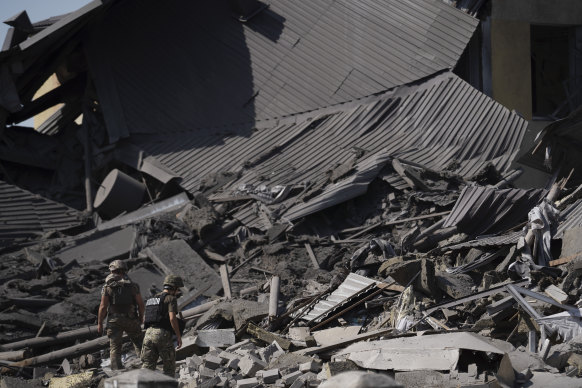 Ukrainian servicemen walk on the debris of a heavily damaged school after a Russian attack in Druzhkivka, Donetsk region, eastern Ukraine.Credit:AP

While independent verification of battlefield action has been difficult, Britain’s Defence Ministry said in an intelligence report that several Ukrainian brigades had stepped up their artillery fire in front-line sectors across southern Ukraine.

Ukrainian authorities kept the world guessing about their intentions, sidestepping talk of a major counteroffensive over the past couple of days.

The port city of Kherson, with a prewar population of about 300,000, is an important economic hub close to the Black Sea and the first major city to fall to the Russians in the war that began six months ago.

Occupation forces have spoken of plans to hold a referendum on making the Kherson region a part of Russia and have pressured residents to take Russian citizenship and stop using Ukraine’s currency.

Ukraine’s presidential office reported “tough battles” going on across practically all of the area and said Ukrainian forces destroyed ammunition depots and all large bridges across the Dnieper River vital to supplying Russian troops. 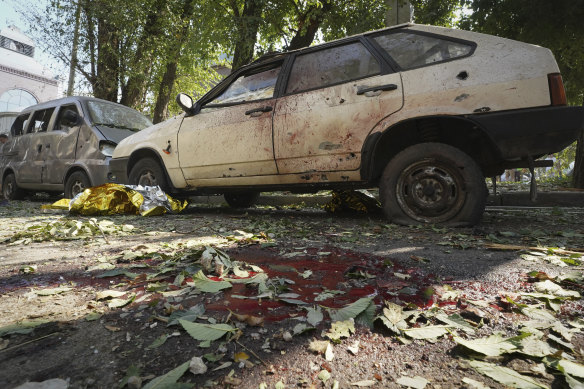 Blood on the ground where a person was killed in Russian attack, Kharkiv, Ukraine.Credit:AP

The Ukrainian military said on Tuesday evening that the Russians were shelling more than 15 settlements in the Kherson area and resorting to airstrikes.

The British said that most of Russia’s units around Kherson “are likely under-manned and are reliant upon fragile supply lines” while its forces there are undergoing a significant reorganisation.

Russian Defence Ministry spokesman Lieutenant General Igor Konashenkov maintained that its forces stood up well and that Ukraine lost hundreds of troops, tanks and other armoured vehicles in Monday’s action. His claim could not be independently verified.

Ukrainian independent military analyst Oleh Zhdanov told The Associated Press that “it will be possible to talk about the effectiveness of Ukrainian actions only after large cities are retaken.” He added that Ukrainian forces had breached the first and the second lines of defence in the Kherson region several times in the past, “but it didn’t bring about results”.

“The most important thing is Ukrainian artillery’s work on the bridges, which the Russian military can no longer use,” Zhdanov said.

The war has turned into a stalemate over the past months, with casualties and destruction mounting and the population bearing the brunt of the suffering during relentless shelling in the east and south.

In other battlefield reports, at least nine civilians were killed in more Russian shelling, Ukrainian officials said, from the Black Sea port of Mykolaiv to the northeastern industrial hub of Kharkiv, where five were killed in the city centre.

The fighting complicates what could be a treacherous trip from Kyiv to Europe’s largest nuclear power plant, Zaporizhzhia, by an inspection team from the UN’s atomic energy agency.

The experts may have to pass through areas of active fighting, with no publicly announced cease-fire, to reach the Russian-occupied plant, where shelling has driven fears of a catastrophe. Ukraine and Russia have accused each other of shelling the area over and over.

Nikopol, a city just across the Dnieper from the plant, again came under a barrage of heavy shelling, authorities said, with a bus station, stores and a children’s library damaged. And a Russian missile strike targeted the city of Zaporizhzhia, about 50 kilometres (30 miles) from the plant, Ukraine said.

In other developments, the first ship carrying grain from war-torn Ukraine for people in the hungriest parts of the world docked at the Horn of Africa port of Djibouti as deadly drought and conflict grip East Africa. The grain is going to Ethiopia.

European Union nations remained divided over whether to slap a broad visa ban on Russian citizens, torn between a desire to ramp up pressure on President Vladimir Putin and concern about punishing people who don’t support his war.

German Chancellor Olaf Scholz said his country — Europe’s biggest economy — is well-prepared to tackle a possible energy shortage because of Russia’s squeeze on European gas supplies. Russia has cut off or reduced the flow of gas to a dozen EU countries, raising fears ahead of winter. Seven Baltic Sea countries announced plans for a sevenfold increase of wind power production by 2030 to free northern Europe from its dependence on Russian natural gas.

The Vatican defended Pope Francis from allegations he hasn’t come down hard enough on Russia for its invasion of Ukraine, saying the pontiff clearly views the war as “senseless, repugnant and sacrilegious.”