Anne Heche visited Venice Beach hair salon and ‘randomly’ bought a red wig hours before plowing her Mini through a house: Star was ‘very pleasant’ and ‘appeared sober’, business owner says – as she remains in hospital in a coma

Anne Heche visited a Venice Beach hair salon and ‘randomly’ bought a red wig just hours before she plowed her Mini Clubman through a house, the business owner has revealed.

Richard Glass, who runs Glass Hair Design, said the actress was acting like ‘a sweet little girl’, was ‘very pleasant’ and seemed sober during the flying visit at 10.35am on Friday.

He posted a picture of the pair and her bizarre purchase on his Instagram page but later admitted he originally mistook her for Orange Is the New Black star Lori Petty.

It comes as Heche remains bedbound in a Los Angeles hospital in a coma following the horrific car crash in the Mar Vista area of the city.

The 53-year-old actress is in an ‘extreme critical condition’ with a ‘significant pulmonary injury requiring mechanical ventilation and burns that require surgical intervention’, according to her agent.

Her car erupted in an explosive fireball after driving straight through the building around 11am on Friday, with her being dragged out by hero firefighters who stretchered her into an ambulance.

Moments earlier she had pranged her Mini on the wall of a garage nearby and was snapped by a witness with a red-capped bottle that appeared to be vodka in the cup holder. 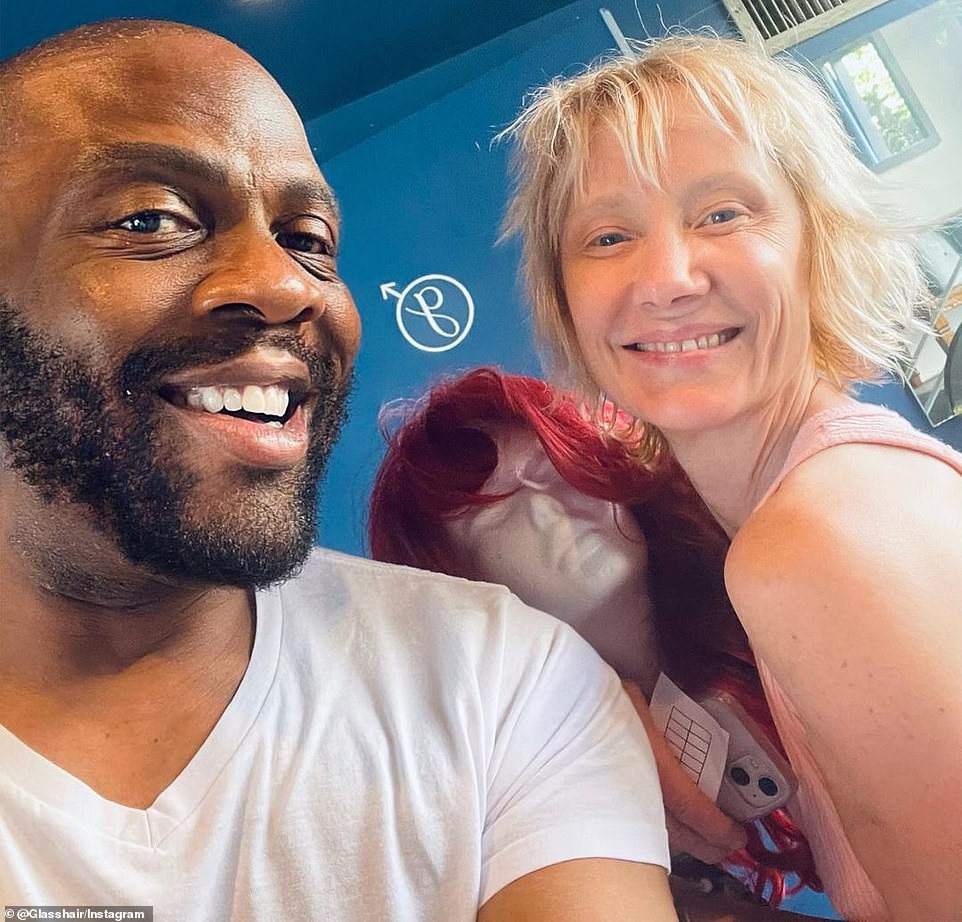 Anne Heche visited a Venice Beach hair salon and ‘randomly’ bought a red wig just hours before she plowed her Mini Clubman through a house, the business owner has revealed 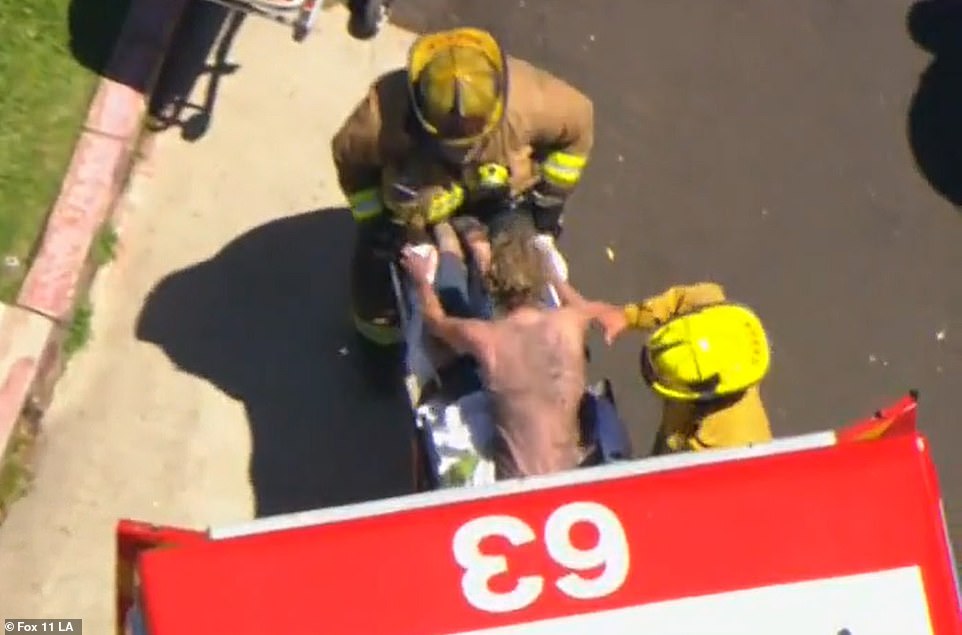 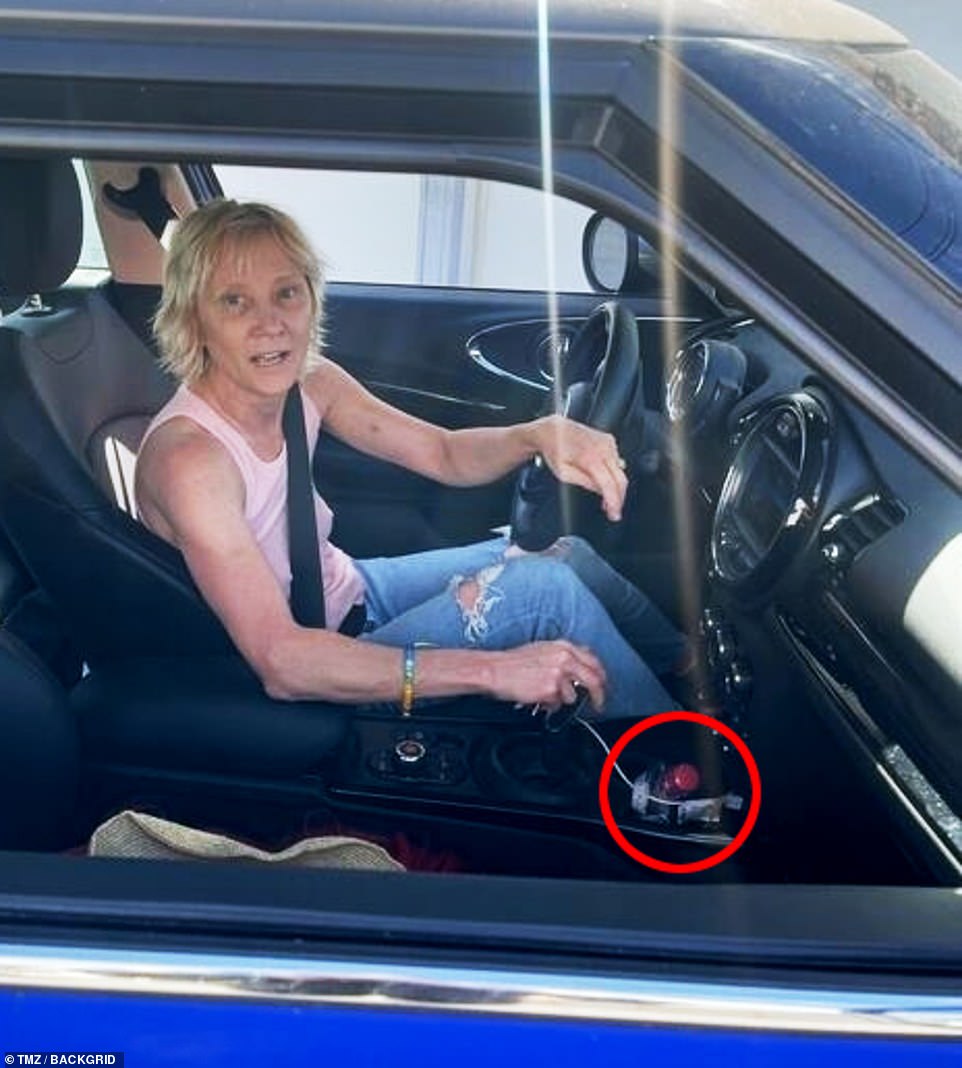 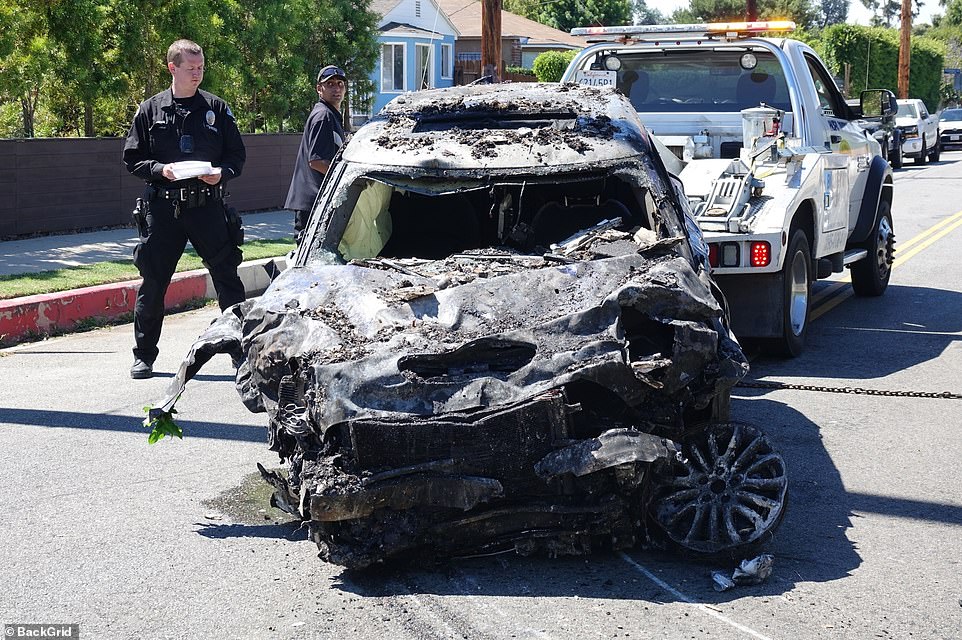 The 53-year-old suffered horrific burns during the collision and was recorded being dragged out of the mangled wreck by firefighters after it burst into flames in Los Angeles around 11 a.m. 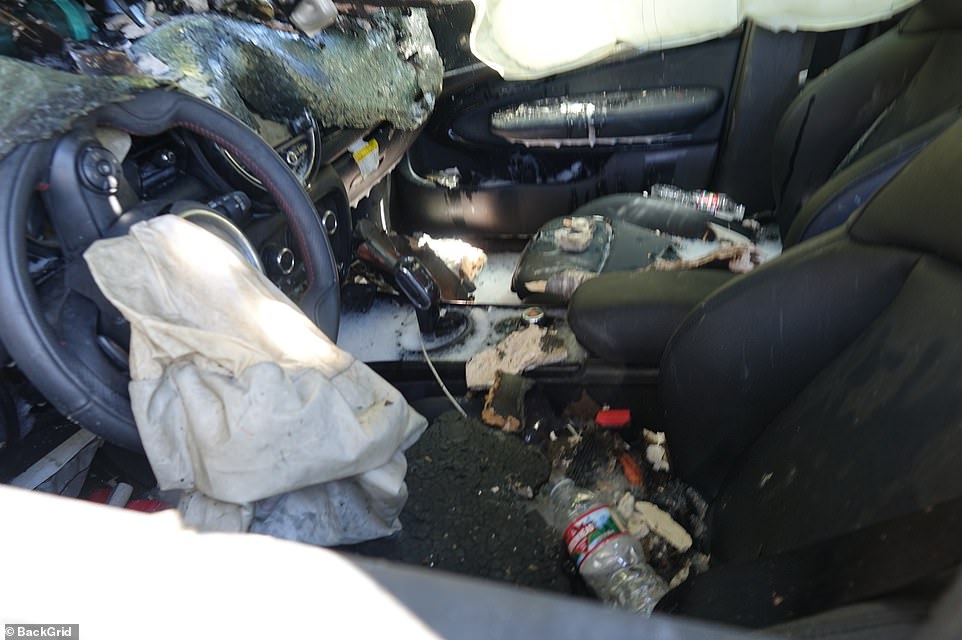 Sharing the picture on Instagram, Glass wrote: ‘So I met @anneheche today and she purchased a #redwig so random. I love Venice Beach.’ He said he told her the wig was not cut, styled or washed but she did not care.

He later told the LA Times the actress ‘grabbed my face’ and cuddled it before asking if they had worked together in the past, which he said they had not.

The hairdresser said the whole encounter had been ‘so strange’ and ‘very, very random’ and he returned to cutting his other client’s hair as they discussed Heche’s relationship with Ellen DeGeneres.

Heche was still fighting for her life in hospital in ‘extreme critical condition’ after being trapped in the burning wreckage of her car for around 30 minutes.

A representative for Heche said yesterday: ‘At this time, Anne is in extreme critical condition. She has a significant pulmonary injury requiring mechanical ventilation and burns that require surgical intervention.’

The spokesman added in the statement: ‘She is in a coma and has not regained consciousness since shortly after the accident.’

Earlier on Monday, newly released footage showed the moments before the crash in which Heche almost mowed down a woman.

She was recorded speeding down an alleyway and narrowly missing the pedestrian as she walked along the sidewalk in Mar Vista.

The woman, who has not been identified, whipped around in astonishment as the blue Mini Clubman raced past just before 11am. 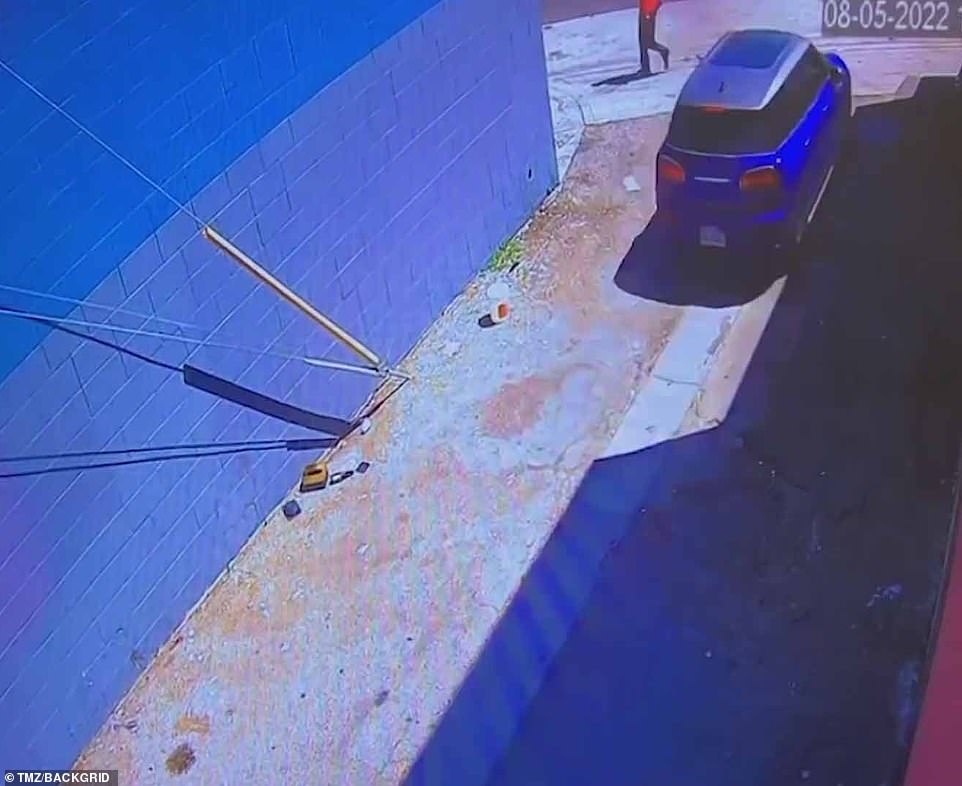 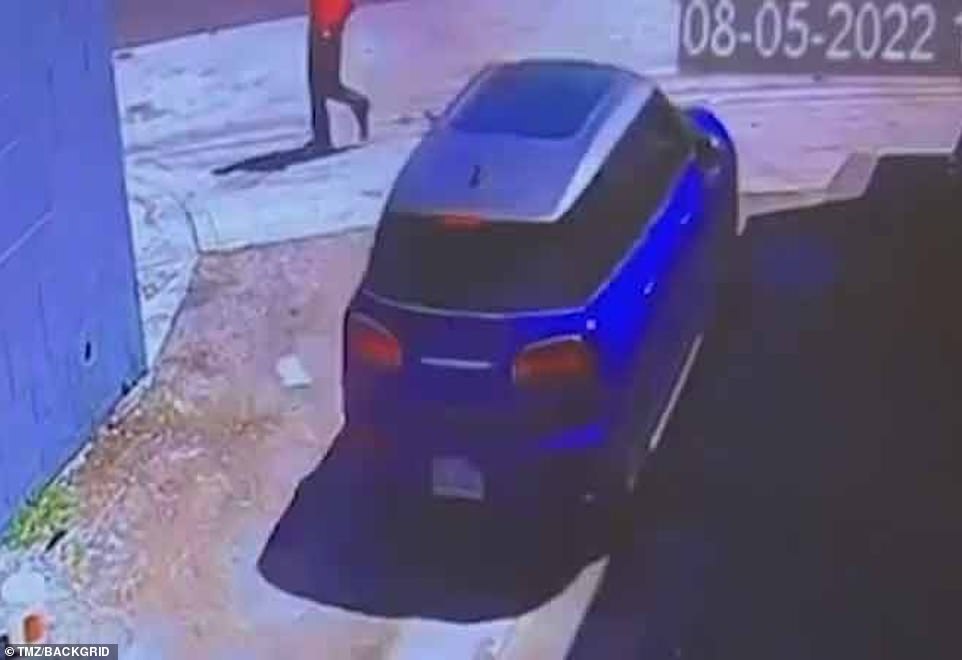 The actress, 53, was recorded speeding down an alleyway and narrowly missing the pedestrian as she walked down the sidewalk in Mar Vista 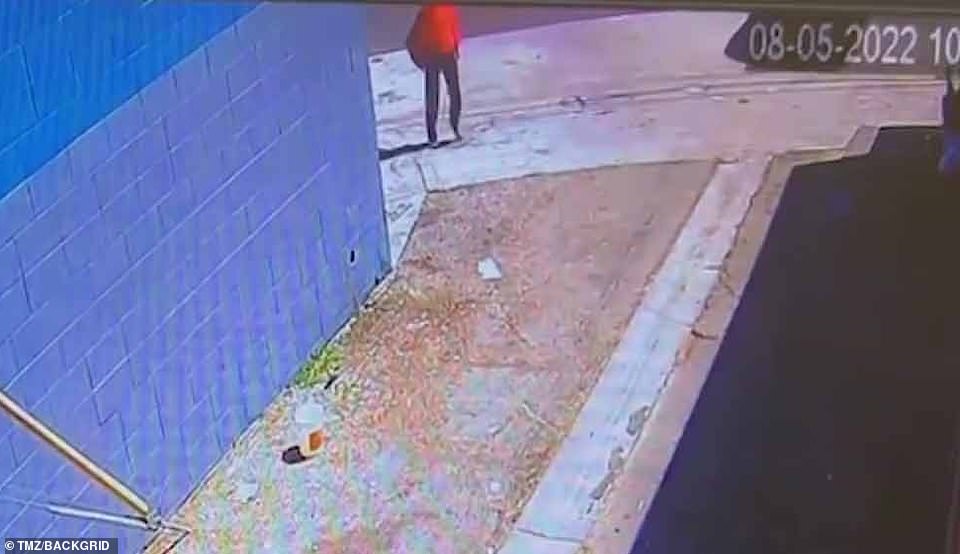 The woman, who has not been identified, turned around in astonishment as the blue Mini Clubman raced past just before 11 a.m. on Friday 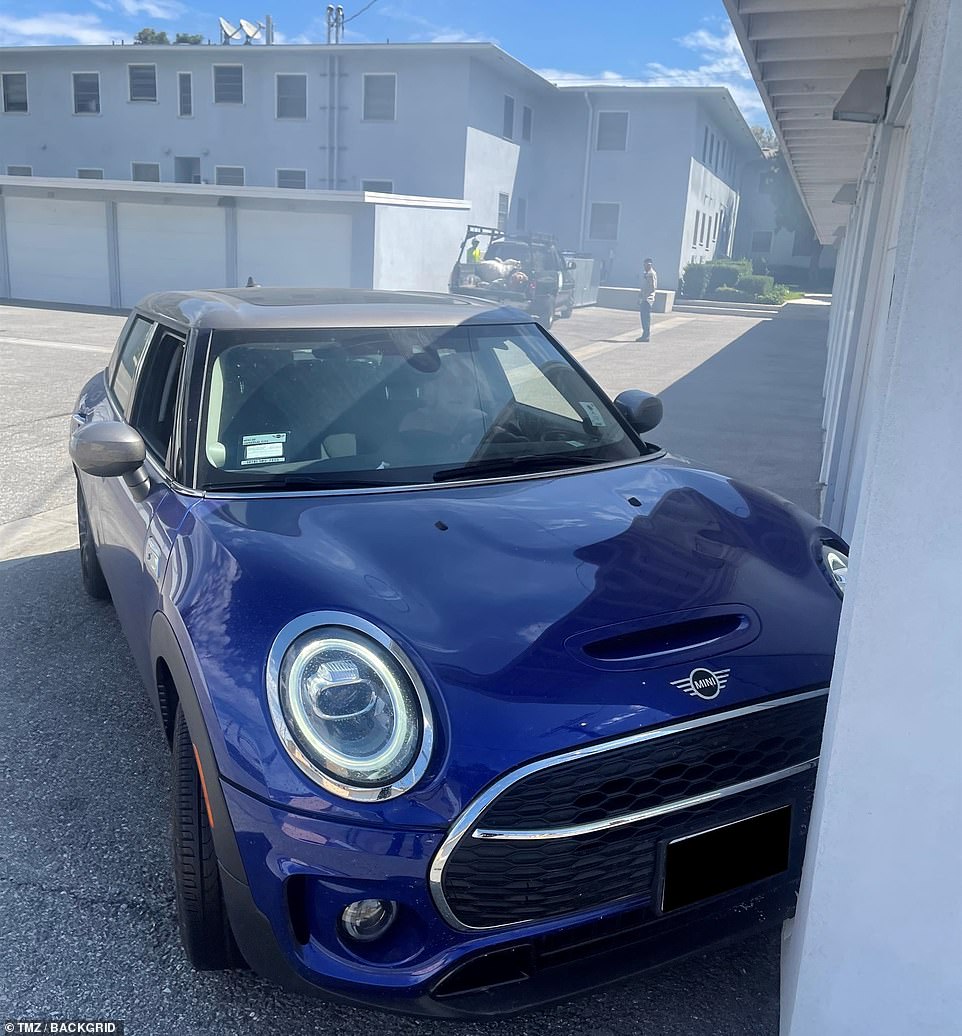 Pictures and video showed her looking dazed at the wheel after the first crash, with a witness capturing her with a bottle with a red top on it in her car. It is not clear what was in the container but it looked like a vodka bottle

It comes as police insiders revealed Heche, who was intubated with horrific burns after the terrifying crash, is set to be investigated over the 90mph smash.

LAPD officers are poised to sample her blood from her hospital bed within the coming weeks to get to the bottom of whether she was under the influence while behind the wheel.

They said the minimum the actress could face is hit-and-run charges for the garage crash which saw her quickly take off despite being filmed by shocked witnesses.

A picture taken by a witness before the crash showed her in her blue Mini Clubman with a bottle with a red top on it looking glassy eyed.

Earlier, a somber image emerged of Lynne Mishele watching her house and ‘an entire lifetime of possessions’ burn down before her eyes.

A GoFundMe page set up for her by members of her westside Los Angeles community raised more than $50,000 in a single day after being created over the weekend.

The page details how Mishele, who is referred to as a ‘kind and generous person’, narrowly escaped death following the horrific crash but was forced to look on as her property crumbled amid the brutal blaze.

The goal of the GoFundMe page set up by neighbors John and Jennifer Durand is $100,000 to try to replace the memories lost in the fire. 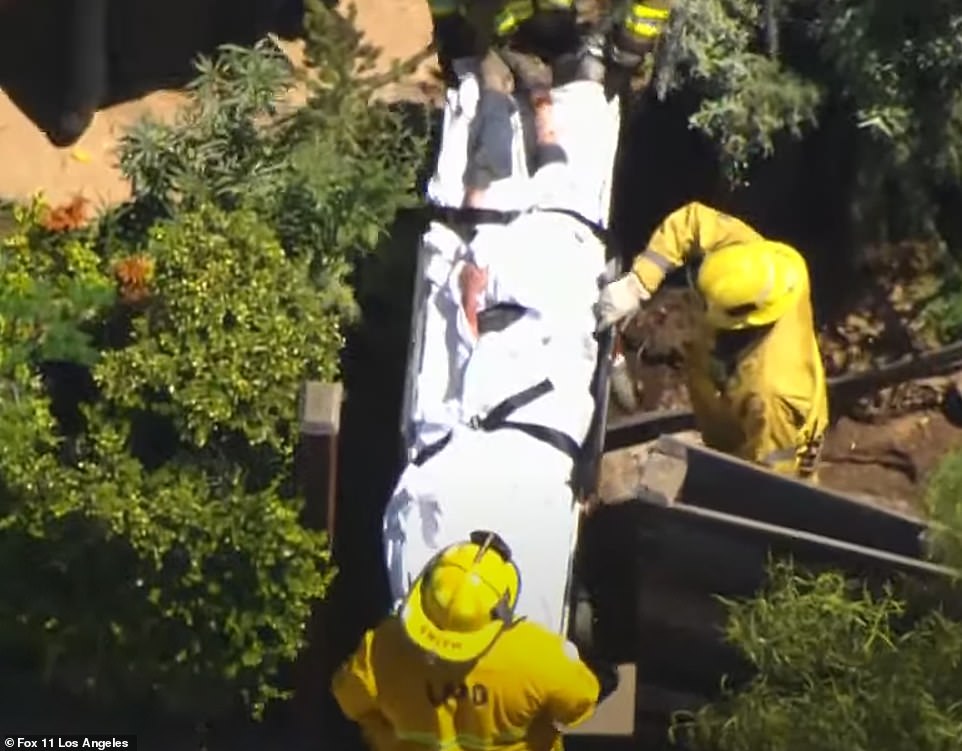 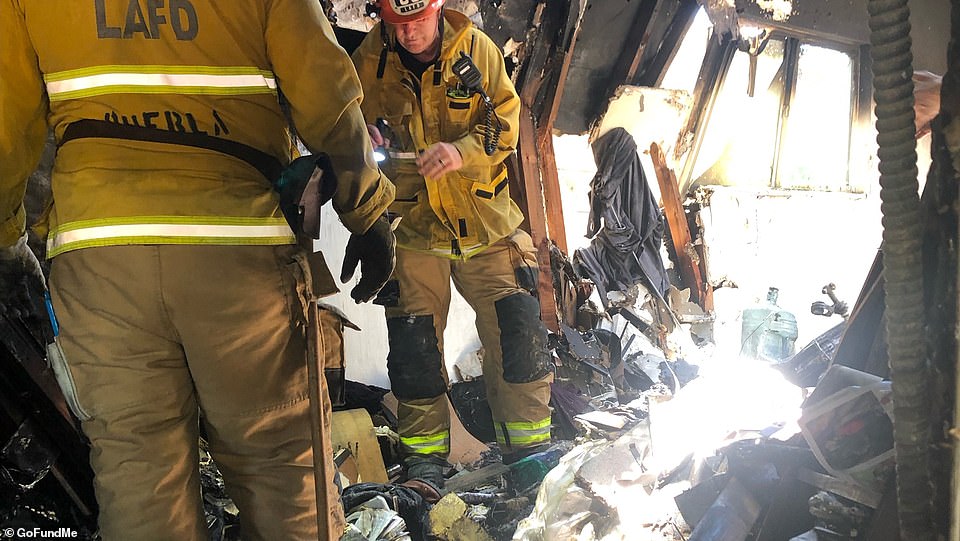 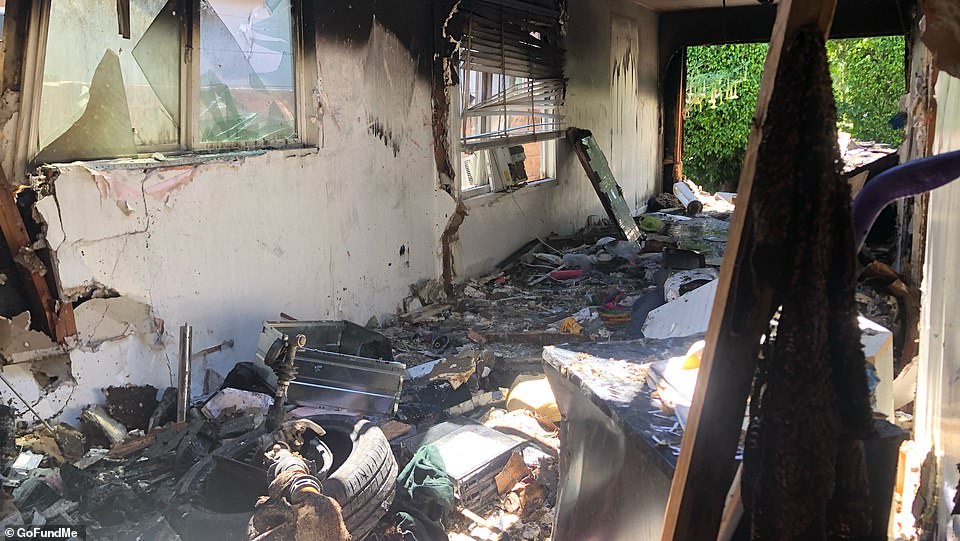 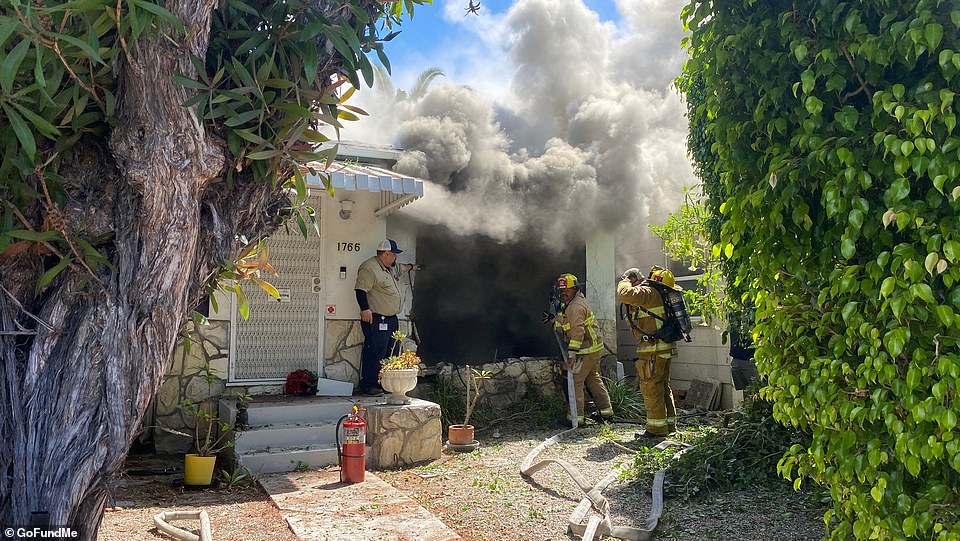 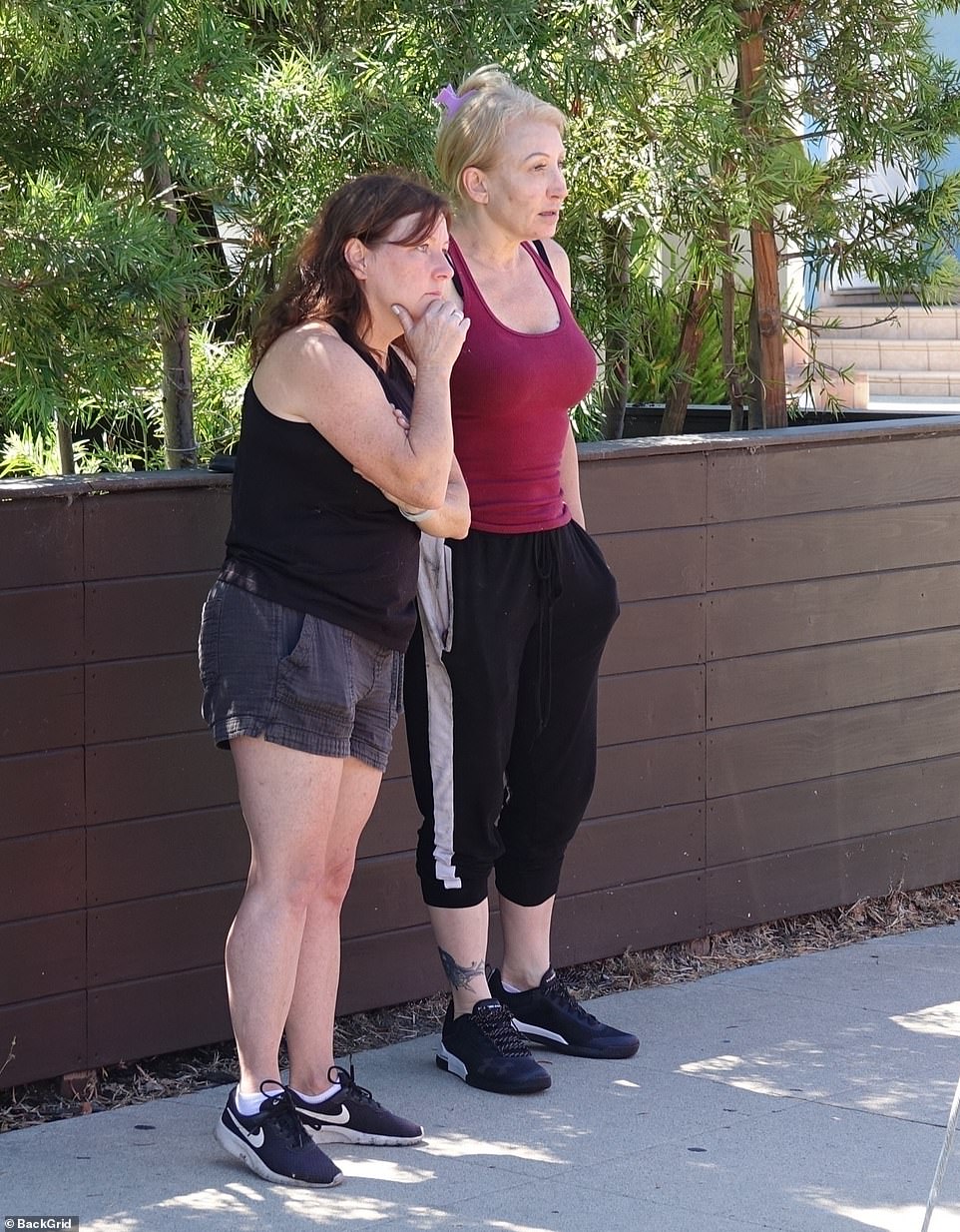 Homeowner Lynne Mishele, seen in the maroon, stands across the street from her home looking dazed and confused  after actress Anne Heche slammed a Mini into the side of her house and triggered a large fire

The page read: ‘Lynne lives with her beautiful pups Bree and Rueban, and tortoise Marley in the Mar Vista home that was destroyed this week by a car driving into the home at a high rate of speed, catching the house on fire.

‘Even more distressing is that Lynne lost her entire lifetime of possessions, mementos, all equipment for her business including her laptop and iPad, all of her clothing and basic necessities, and all household items.

‘With firefighters’ help, she was able to pull a few damaged sentimental belongings from the wreckage. Everything else is gone.’

Mishele’s neighbor Lynne Bernstein told People Magazine that her friend was ‘extremely fortunate’ to survive. She added: ‘So were the dogs and her turtle.’

Bernstein said that Mishele was luckily in a different part of the home than where the crash occurred. She described her initial reaction to the crash, saying: ‘I don’t think she got what was going on.

‘She said, ‘What happened? What happened?” Bernstein also said that Heche’s car went ‘almost all the way through’ the home and ‘almost immediately’ burst into flames.

According to her LinkedIn page, Mishele is the founder of Creative Organization, a company that helps to organize ‘your home, your office and your life. We help you simplify everything!’

She describes herself as an ‘effective organizing professional with expertise in approaching organizing issues with a creative outlook. 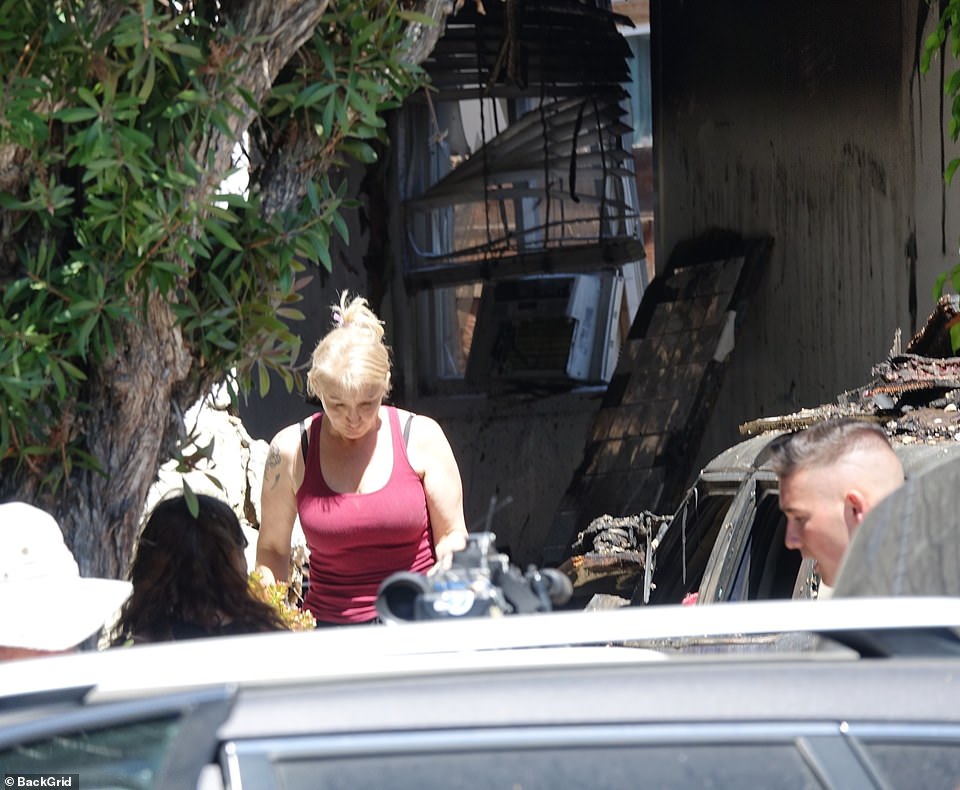 Mishele can be seen outside of her wrecked home in the minutes following the crash – Heche’s Mini still on the right, waiting to be removed 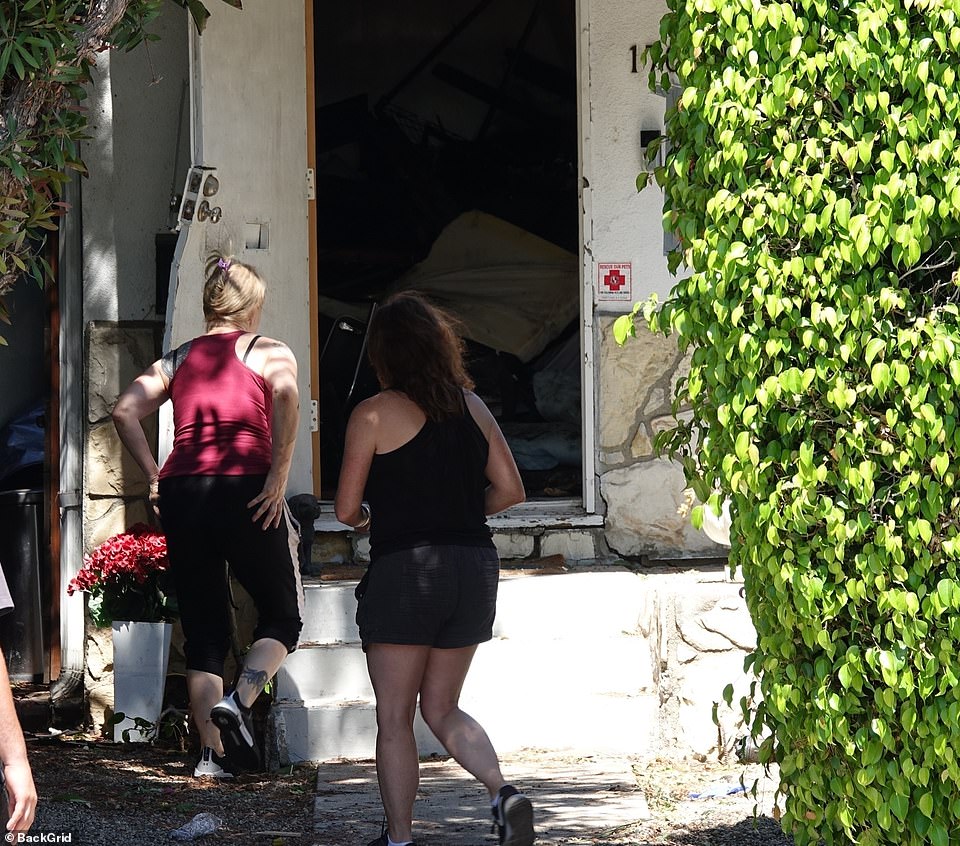 Mishele can be seen, left, as she surveys the damage to her home 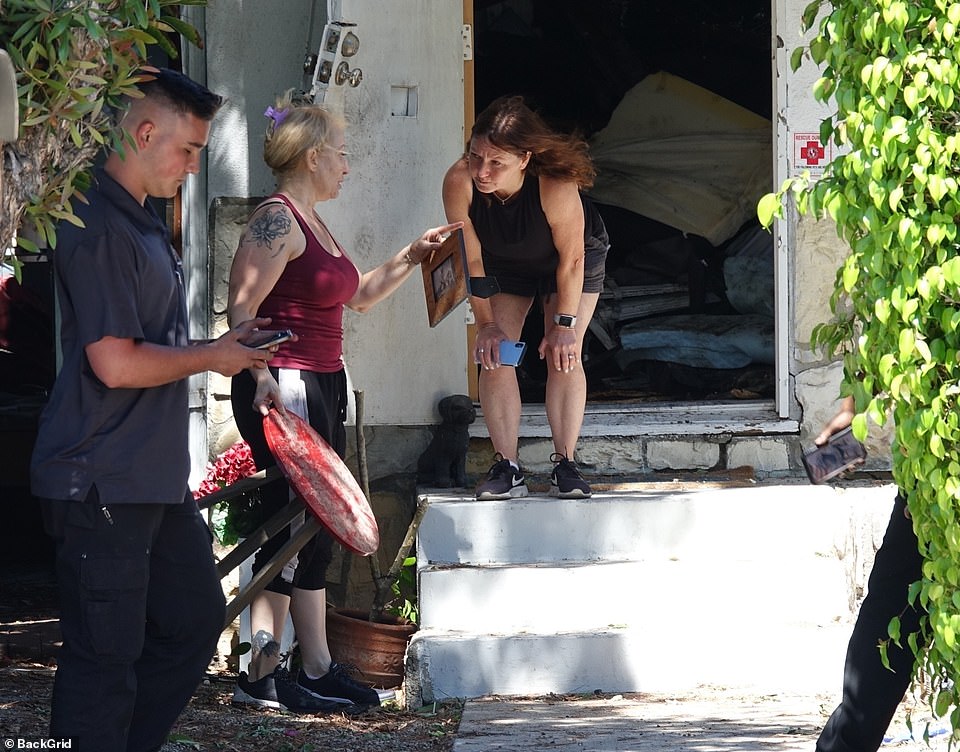 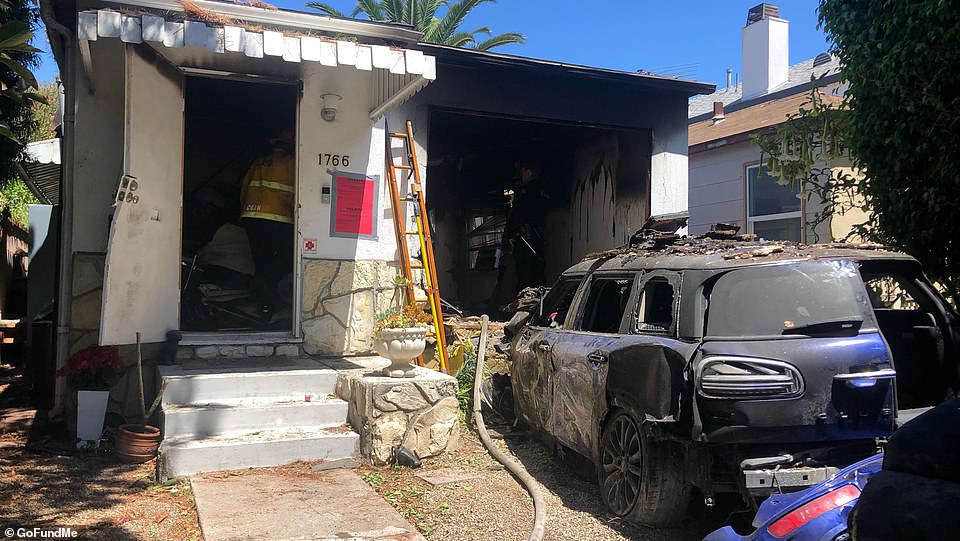 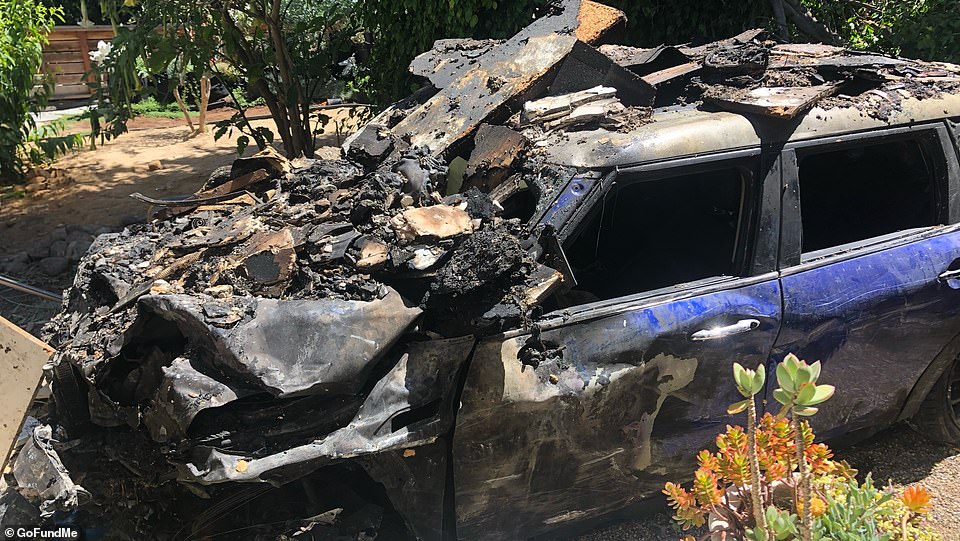 According to the Los Angeles Fire Department, the crash caused ‘structural compromise and erupting in heavy fire’

‘An innovative organizer that has a proven track record with establishing successful systems for each individual client.’

Mishele says on her LinkedIn page she founded the company in 1993. Previously, she worked as a travel director at Citigroup and as a marketing associate for Sony Pictures.

The entrepreneur is a graduate of the Pratt Institute in Brooklyn, New York.

While on her Instagram page, Mishele regularly posts self-help videos. A few days before the accident that destroyed her home, she posted a video titled: ‘Don’t leave a burden for your loved ones.’

In the video, she encouraged her followers not to leave things to loved ones after they die without asking them first if they want the items.

Before the crash, a slurring Heche joked on a podcast about drinking vodka with wine chasers – claiming at the time that she was having a ‘very bad day.’

Better Together, which she co-hosts, aired just hours before she crashed her car into the house. She and co-host Heather Duffy say Refined – a vodka distillery which sponsored one of their shows – gave them free alcohol.

‘We each have a bottle in front of us because our friends sent us a bottle of Refined and I think we even did a bad commercial for them in the beginning of our days.

‘Dr. Rahm said that we should be drinking vodka instead of wine,’ Duffy says, to which Heche adds, ‘and we listened, and we are drinking it.’

Duffy then reveals they are using wine to chase down the vodka, before Heche reveals: ‘Today’s been a very unique day.

‘I don’t know what happened, sometimes days just suck and I don’t know if you ever have them [but] some days, those no good, very bad days, and some days days just end up like this.

‘Sometimes days just suck and I don’t know if you ever have them, but you know some days, Mama says just gonna be like this,’ she continues. ‘Some days there’s those no good, very bad days.

‘And I don’t know why some days just end up like this, and things don’t really rock me like that.’

She later revealed how she has had a tough week, explaining how people interrupted her meditating at her apartment. It remains unclear if the podcast was recorded on Friday, or if that is just when it aired. 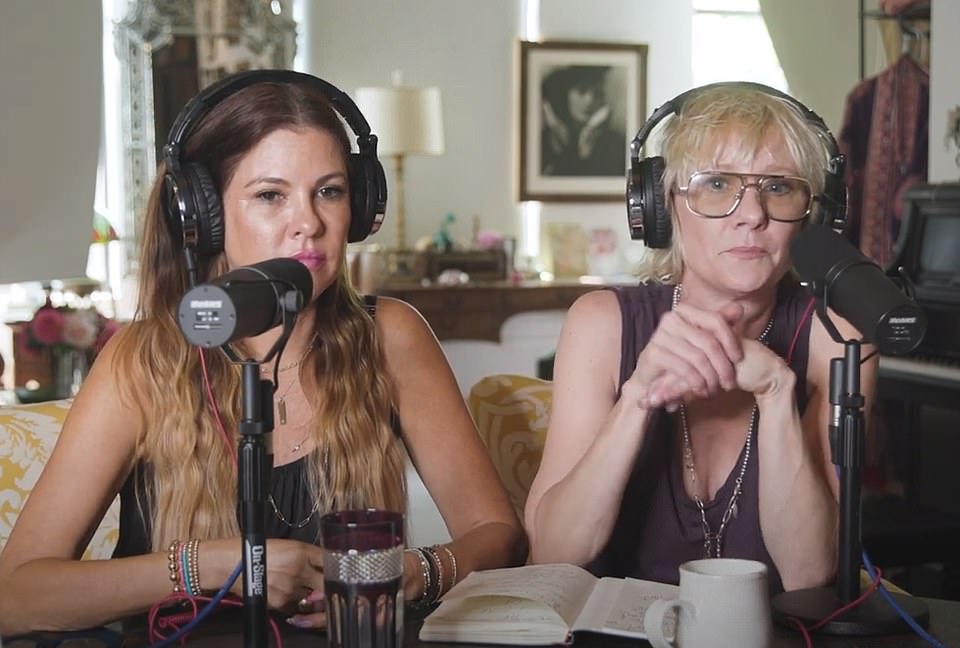 In Friday’s episode of Better Together, Heche appears to slur her words as she and co-host Heather Duffy tell the audience they are drinking vodka with wine chasers. The two co-hosts are pictured in an earlier podcast 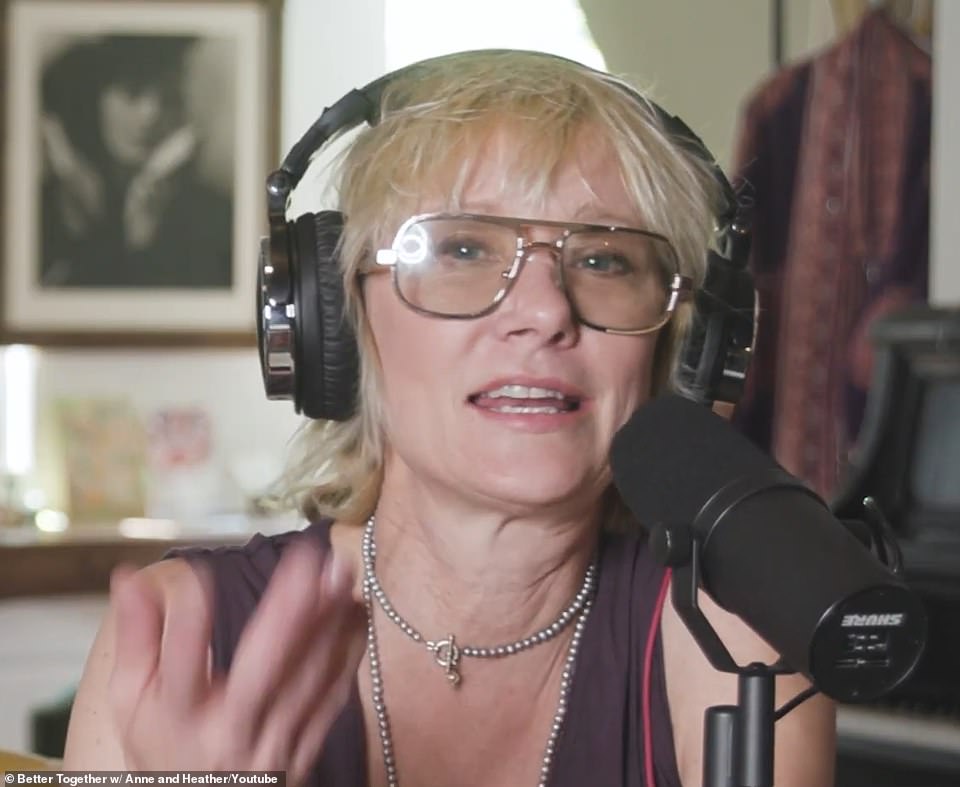 Heche, 53, goes on to talk about how she was having a bad day in the most recent podcast episode. It is unclear whether it was recorded on Friday before her crash, or if that is just when it aired. She is pictured here in an earlier podcast