London: New Zealand Prime Minister Jacinda Ardern has been savaged for sucking up to China and turning her back on the Five Eyes alliance during a historic debate in which British MPs unanimously declared that China is carrying out genocide and crimes against humanity.

The vote on the motion addressing Beijing’s repression of the Uighurs in Xinjiang province was carried unanimously, making it the first time in the Commons’ history that MPs have passed a genocide motion without dissent. 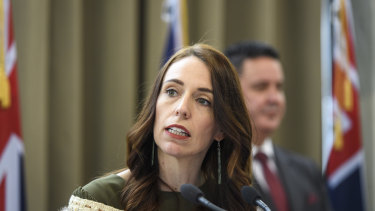 During the debate, Australia was repeatedly praised for its actions in standing up to China, despite the massive cost to the trading relationship, estimated to be worth at least $18 billion with China blocking lobster, wine, barley and some coal imports, ever since Australia asked for an inquiry into the origins of coronavirus.

But MPs voiced concern about the New Zealand government’s recent comments cautioning against the Five Eyes expanding its remit beyond intelligence sharing – remarks that blindsided Australia but were immediately endorsed by the Chinese.

The Five Eyes is a spying network combining Australia’s allies the United States, UK, Canada and New Zealand; New Zealand has opted out of several statements criticising China’s increasing aggression, including its crackdown in Hong Kong.

Bob Seely, a Tory MP, savaged the stance taken by Jacinda Ardern, saying she was “in a hell of an ethical mess.” 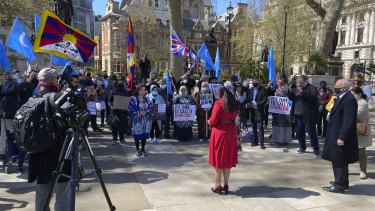 Conservative MP Nus Ghani in London ahead of the genocide vote.

“A prime minister who virtue signals whilst crudely sucking up to China whilst backing out of the Five Eyes agreement, which I think is an appallingly, appallingly short-sighted thing to be doing,” he said.

Seely said Britain needed to stand instead “shoulder-to-shoulder” with Australia.

“The Australians are calling out China and they’re doing it at trade risk – we need to make sure that they do not pay an ethical price,” he said.

The landmark genocide motion was put forward by Nus Ghani, a Muslim MP and member of Boris Johnson’s Conservative Party and one of a string of British MPs recently sanctioned by the Chinese Communist Party after the British government used human rights – or the Magnitsky legislation – to sanction Chinese officials responsible for the crackdown in Xinjiang. 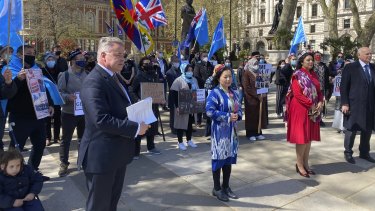 Rahima Mahmut from the World Uighur Congress with Conservative MPs Nus Ghani and Sir Iain Duncan Smith in London ahead of the genocide vote.

Ghani said she hoped the historic event would spur Australia – which is refusing to label the human rights abuses in Xinjiang – as genocide into action.

“We hope this will send a strong geopolitical signal to our Australian allies,” Ghani told The Sydney Morning Herald and The Age.

“Like-minded nations must stand together against these atrocities, and be united in their response. By slapping sanctions on elected representatives from around the world, China has brought us even closer together.

“We must redouble our efforts in defence of our common values, and Australia is a key and indispensable part of that.

“We look to our Australian friends to carry the torch of human rights still further, and make their views about the Uighur Genocide known,” Ghani said.

Labor Senator Kimberley Kitching who is a co-chair of the Australian wing of the Inter-Parliamentary Alliance on China, a group of cross-party MPs from democratic legislatures around the world urging their governments to take a firmer stance on China policy, welcomed the Commons move but said governments needed to act.

“Today’s vote in the British Parliament is a clear sign that the world is waking up to the suffering of the Uighur people,” she said.

“The international community can no longer be idle in the face of this brutal repression.

“Condemning the abuses is not enough. So long as governments fail to take meaningful action to hold those responsible to account then these atrocities will continue.

“We only need to look to history to see where this ends,” Kitching said.

Rahima Mahmut from the World Uighur Congress said to MPs and human rights campaigners: “I thank you all from the bottom of my heart.”

An, Ethical, HELL, jac, Mess, of
You may also like: