‘He’s an embarrassment’: Biden glad Trump will skip his inauguration

Washington: US President-elect Joe Biden says he is glad that Donald Trump will not attend his inauguration on January 20 because Trump had exceeded even his worst expectations by inciting his supporters to storm the Capitol Building.

Trump announced in a tweet on Saturday AEDT that he would bypass Biden’s inauguration – making him the first outgoing president not to attend the event since Andrew Johnson in 1869. 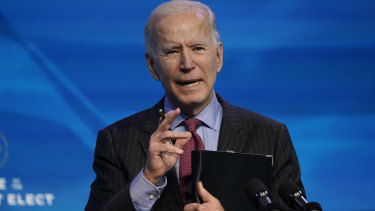 Biden said that Trump's decision to skip the event was "one of the few things he and I have ever agreed on".

"It's a good thing him not showing up," he said.

It was a change in position for Biden, who said last month that he hoped Trump would be present at his inauguration to symbolise the peaceful transfer of power.

Asked why he had changed his mind, Biden said: "Because he’s exceeded even my worst notions about him … He's been an embarrassment to the country."

Biden did not say whether he is supporting the accelerating push by House Democrats to impeach Trump for a second time.

In a letter to colleagues on Saturday (AEDT) Speaker Nancy Pelosi said that if Trump is not removed by his cabinet, the House will "proceed with our action".

She said there was more support in the Democratic caucus to impeach him now than there was when Trump was impeached in December 2019 over his dealings with Ukraine.