Holly and Phil return to This Morning amid queue row

‘We understand the reaction, but we would never jump the queue’: Holly Willoughby and Phillip Schofield insist they followed ‘broadcasting rules’ to see Queen lying in state as they return to This Morning amid line-jumping row

Holly Willoughby and Philip Schofield have hit back against claims they jumped the queue as the Queen was lying in state as they returned to This Morning for the first time since the incident.

Clips last week showed Holly and Phil walking through Westminster Hall last week as around 250,000 people waited to bid a final farewell to the Queen – many waiting up to 24 hours for the opportunity.

Among those waiting was football legend David Beckham, who turned down the option to skip the queue to stand in line for 13 hours to see the Queen.

Suggestions that the This Morning hosts were able to jump in front of the queue caused outrage on social media. 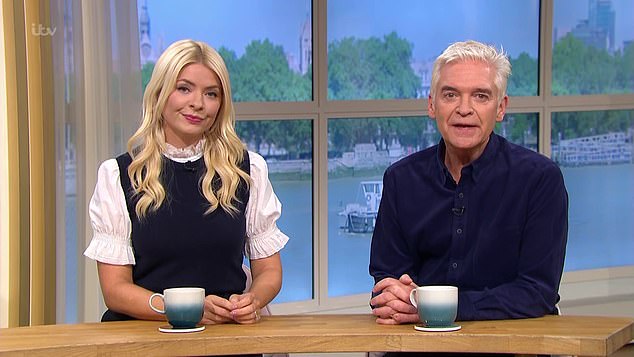 In the first show since then, Holly and Phil strongly denied claims of line-jumping and said they had been in Westminster Hall to work 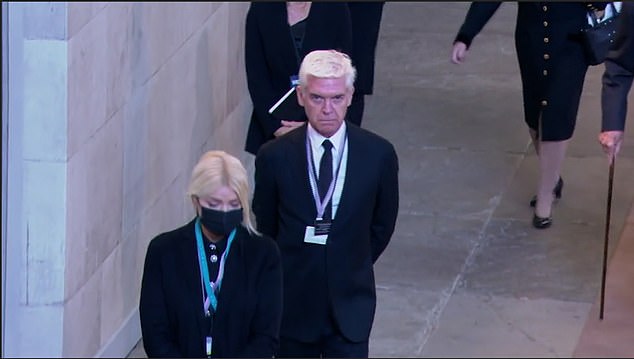 Clips last week showed Holly and Phil walking through Westminster Hall last week as around 250,000 people waited to bid a final farewell to the Queen

However, in the first episode of the show since then, Holly and Phil strongly denied the claims, and said they had been in Westminster Hall to work.

They said: ‘Like hundreds of accredited broadcasters and journalists we were given official permission to access the hall.

‘It was strictly for the purpose of reporting on the event for millions of people in the UK who have not been able to visit Westminster in person.

‘The rules were that we would be quickly escorted around the edges to a platform at the back.

‘In contrast, those paying respect walked along a carpeted area beside the coffin and were given time to pause.

‘None of the broadcasters and journalists there took anyone’s place in the queue and no one filed past the Queen. We of course respected those rules.

‘However, we realise that it may have looked like something else, and therefore totally understand the reaction.

‘Please know that we would never jump a queue.’

A petition to have Willoughby and Schofield axed from the show has already attracted over 14,700 signatures (out of a target of 15,000) following the controversy.

The author of the petition lashed out at the TV stars for being ‘able to push past thousands [in the queue] and get immediate access.’

They also claimed ‘ITV should be ashamed of exploiting the situation.’