Householders horrified at £80,00 bills after Ovo takes over SSE

Householders are horrified to receive £80,000 energy bills after supplier Ovo takes over SSE for £500million

Horrified customers of the energy supplier Ovo have been left in shock since receiving bills of up to £80,000 – after the company took over SSE for £500million.

Such high bills occurred because of data errors that led to drastically overinflated energy projections for certain households, said the supplier.

Taking to Twitter, the customer, Andy Liggins, wrote: ‘I knew rates were going up but…’ and shared a photo of his meter.

Meanwhile, one woman was told she owed £44,800 for two months’ supply of energy for her one-bedroom flat.

Speaking to The Guardian, she said: ‘I’d been asked to send photos of my meters in August as Ovo believed there was an issue.

One Ovo customer on Twitter, Andy Liggins, took to social media to share his energy bill of £79,580.45 per hour on November 17 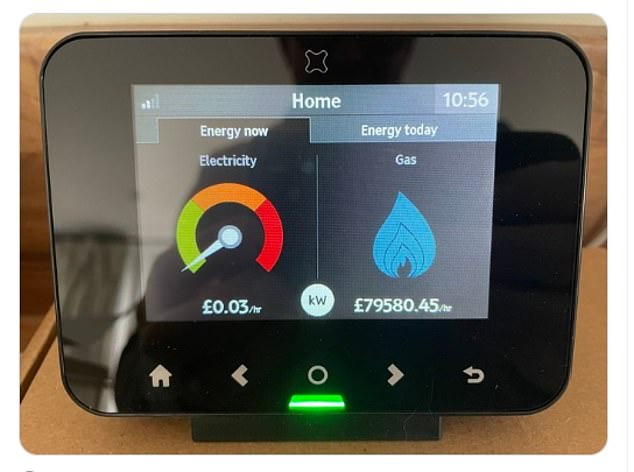 Mr Liggins captioned the tweet: ‘I knew rates were going up but…’ and tagged both the energy supplier and Martin Lewis, the founder of Money Saving Expert

The woman’s account was discovered to be £239 in credit after the Guardian contacted Ovo.

Ovo admitted that meter reading errors have impacted certain customers, claiming problems with some accounts that were transferred to Ovo after it bought SSE’s retail division in 2020 were the issue.

The supplier blamed a mismatch between the opening and closing of meter readings taken when the woman’s SSE account was transferred to Ovo – and paid her compensation.

Another angry customer on Twitter, Victoria DeLuis, shared her gas bill of £28,500.47 per hour with the energy supplier Ovo 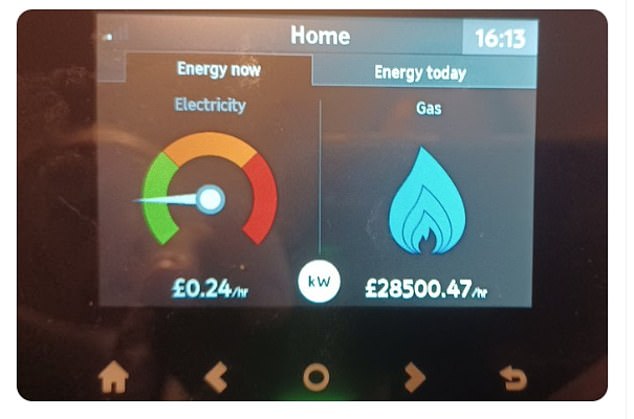 Ms DeLuis captioned the tweet: ‘So, today I relented and finally had a SMART metre installed. I am using £28,500.47 per HOUR in gas! I don’t even have the heating on’

Meanwhile, other customers have claimed that Ovo has continued to send implausible bills despite receiving updated meter readings and admitting to errors.

One woman, Victoria DeLuis, revealed on Twitter that she was being charged £28,500.47 per hour for gas since installing her smart meter.

Speaking on the social media platform, she wrote: ‘So, today I relented and finally had a SMART meter installed. I am using £28,500.47 per HOUR in gas!

‘I don’t even have the heating on. Called @OVOEnergy and I have to call back Tuesday and hopefully they will be able to sort it out!!!’ 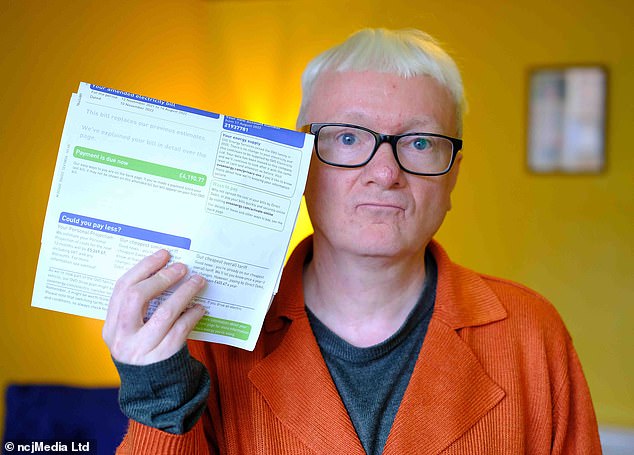 Christopher Barnes, 58, at his one-bedroom flat in Jesmond, was shocked to find that his energy bill has increased to £4,190.77 with supplier Ovo

Another horrified customer, 58-year-old Christopher Barnes, said he has been left feeling ‘shocked’ and ‘appalled’ after an energy company sent him an electricity bill for more than £4,000.

Mr Barnes, who lives in a one-bedroom flat in Jesmond, said his last Ovo bill which he paid on October 11 this year was £59.82.

The 58-year-old couldn’t believe his eyes when he received another bill earlier this month for £4,190.77.

Mr Barnes said there was no explanation as to why the bill was so high and he had to contact Ovo to find out. He said the company claimed the bill – which was sent to him on November 10 – had come from a balance adjustment from SSE.

Mr Barnes, who is disabled, said: ‘I felt absolutely shocked and I couldn’t believe it was real. There’s no way I would be able to afford it.

‘I knew straight away that I would be phoning them up, complaining and fighting it because it is so extreme. It’s like being mugged!

‘If they are doing this to lots of different people then they are causing huge amounts of distress. There are vulnerable customers who might pay that or commit suicide because of a bill like that.

‘It can really affect their mental health. It could terrify them if they already have lots of debt. It could tip them over the edge into suicide.’

One man on Twitter, Chris Stanley, claimed Ovo has bullied ‘an emotionally vulnerable widow’ by forcing her to spend more of her pension to increase the substantial credit on her account

He added: ‘I’m absolutely appalled. I can’t believe that is legal and, if it is, it certainly shouldn’t be. I think they are profiting off the energy crisis.’

Meanwhile, one person on Twitter, Chris Stanley, accused the energy supplier of bullying an ’emotionally vulnerable widow’ by forcing her into spending more of her pension to increase the substantial credit on her account.

When did the Ovo takeover happen?

Mr Stanley wrote: ‘Absolutely flabbergasted at @OVOEnergy in calling an emotionally vulnerable widow to bully her into giving up even more of her pension to increase the substantial credit on her account, based on a projection that has already been proven as massively inflated. Disgusting.’

Ovo increased one man’s, Alistair Strain, monthly direct debits from £418 to £1,989 after calculating that he used £23,330 worth of energy throughout July and August.

‘At least 12 separate customer service advisers have asked me for details,’ he said, ‘given assurances that our account would be put on hold and the matter resolved, but despite this, £1,989 was debited from my bank account last month.’

Speaking to MailOnline, a spokesperson for Ovo said: ‘We have processed millions of successful migrations to date, but we’re aware of a small handful of customers receiving large projections.

‘To resolve this, our teams have set up an extra control to check for large bills to make sure we identify them, and fix them, before they’re sent to customers.’

The spokesperson added: ‘We’re very sorry to Professor Strain for the experience he’s had since his account moved to Ovo. We’ve refunded the amount incorrectly taken to his bank account and offered a goodwill gesture.’

In 2020, Ovo was instructed to pay £8.9million in redress after the energy regulator, Ofgem, found it had wrongly charged customers over five years.

Ofgem did not confirm whether it was aware of the latest payment problems when the Guardian alerted them to the shocking bills.