Housing starts: 'Collapse in single-family permits is the real story'

A steep drop in building permits in August overshadowed the better-than-expected rise in new residential construction and offered fresh evidence of a housing slowdown.

“In short, ignore the headline starts numbers,” Ian Shepherdson, chief economist at Pantheon Macroeconomics, wrote. “The collapse in single-family permits is the real story, and it has much further to go.”

Residential starts — including both single- and multi-family units — increased 12.2% last month to a 1.575 million annualized rate from 1.404 million in July, according to government data released Tuesday. The consensus expectation by Econoday was 1.440 million.

But applications to build declined 10% to an annualized rate of 1.517 million units in August from 1.685 million in July. The consensus expectation by Econoday was 1.621 million.

“As a general rule, when starts and permits move in opposite directions, trust the permits numbers, which lead and usually are less noisy,” Shepherdson added. “The surge in headline starts was concentrated in a 31% leap in the multi-family component, lagging prior gains in permits.”

The jump in construction of multifamily dwellings was due in part to the soaring demand for rental property, which as pushed vacancy rates down to a 38-year low, prompting developers to add more multi-family supply to the market.

“Multi-family starts likely will be little changed in September ,but will then probably drop sharply in October,” Shepherdson said. “They account for about one-third of total starts, but they can dominate the m/m [month-over-month] numbers because they are so volatile.”

The government report also showed the construction pace of single-family housing rose 3.4% to an annualized 935,000 rate, marking the first increase in six months. Permits for single-family homes, on the other hand, fell 3.5% in August to 899,000, down from 932,000 in July. 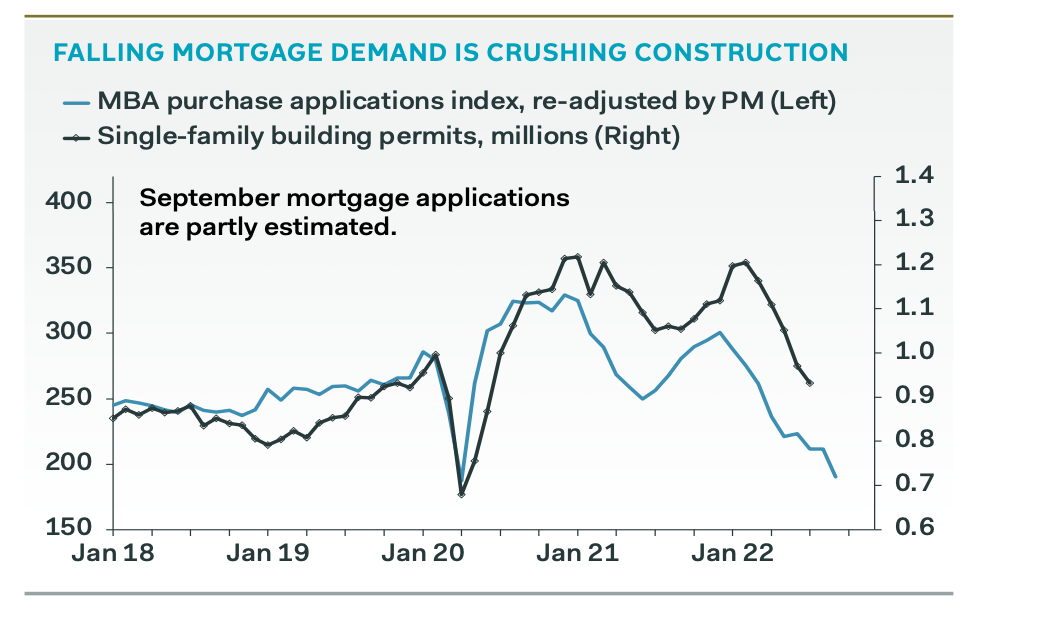 “Despite the small rise [in starts] in August, we are still downbeat on the outlook for starts over the remainder of the year,” Sam Hall, property economist at Capital Economics wrote in a note. “Rising mortgage rates and a surge in house prices have stretched affordability, which is weighing on demand for new homes.”

Construction activity lags sales, and home sales lag mortgage demand, which has come under pressure as higher costs and elevated prices compound affordability for would-be homebuyers, according to Shepherdson. The average 30-year fixed mortgage rate last week topped 6% for the first time since 2008.

“This would be consistent with single-family building permits falling by a further 20%-plus from their July level. Activity appears set to drop well into the fall. We cannot call the bottom of the housing market cycle yet, and even when sales and construction stop falling, prices likely will continue to correct for some time afterwards,” Shepherdson wrote in a note.