How Britain's farms are being devastated by corporate giants

Steeped in the rural traditions that have sustained their families for generations, Ian and Rhiannon O’Connor have long dreamed of owning their own farm.

Like many of those who came before them, the couple planned to raise sheep and cattle on the rolling pastureland of Carmarthenshire – a worthwhile ambition, you might think, with Britain’s food supplies under ever-growing pressure, prices rising rapidly and farmers warning of a looming catastrophe.

Sadly, there has been no happy ending for Ian, Rhiannon and their three small children. Their attempt to buy 260 acres at Frongoch Farm came to nothing when they were outbid, not by fellow farmers, but by a giant private equity firm based 160 miles away in the City of London.

A firm that intends to cover the farm with nothing more edible than trees.

Up and down Britain, the price of agricultural land is soaring as financiers and corporations attempt to ‘offset’ their carbon emissions by snapping up farmland and covering it with forest to soak up carbon dioxide from the atmosphere.

From Yorkshire to Shropshire, Somerset and Devon, farmers and land agents report that farm after farm has been converted to woodland at the behest of major companies, charities, wealthy landowners and celebrities. 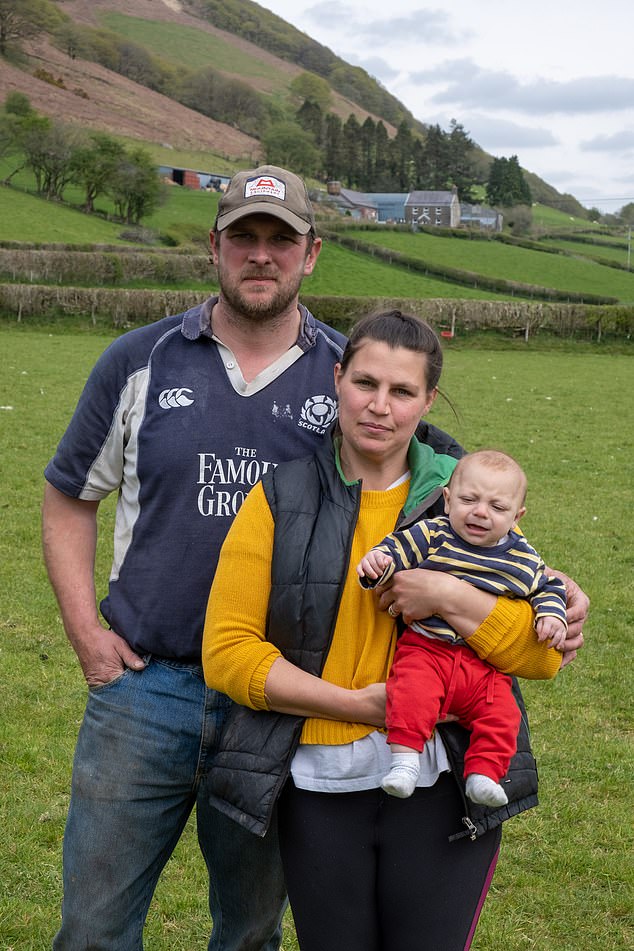 Sadly, there has been no happy ending for Ian, Rhiannon and their three small children. Their attempt to buy 260 acres at Frongoch Farm came to nothing when they were outbid, not by fellow farmers, but by a giant private equity firm based 160 miles away in the City of London

This is on top of other environmental projects such as ‘rewilding’, which are also eating into Britain’s capacity to grow food.

And singer Ed Sheeran has announced plans to convert tracts of land to forestry to make up for his jet-setting.

Even the Church of England, with its giant £9.2billion investment fund, and the Labour Party are keen to signal their virtue by investing in woodland.

As for the old-fashioned business of producing food – it scarcely gets a look-in, as Minette Batters, president of the National Farmers’ Union, revealed in The Mail on Sunday last week.

‘In this country, we have prime conditions to produce food,’ she wrote. ‘Yet, astonishingly, no government has delivered a clear plan to ensure we maintain even the volumes of food we are currently producing.

‘What we have had are plans to take more farmland away from production, to plant trees and provide homes for beavers. Why on earth do we not take food security as seriously as energy security?’ Britain, she says, now faces a terrifying problem – a ‘food apocalypse’. For the O’Connors, and those like them, the reality is a growing disaster here and now, with the viability of communities at stake. Forestry and ‘rewilding’ employ comparatively few people.

It is not lost on the O’Connors that the firm which outbid them to buy Frongoch Farm, the Foresight Group, is based a world away from rural Britain in London’s futuristic Shard building, the tallest in the country – a veritable tribute to Mammon.

Foresight has already acquired a huge portfolio of more than 8,000 hectares across the UK – the equivalent of more than 10,000 football pitches – and will plant up to half of it with hundreds of thousands of trees in the coming years.

The backlash, led by locals, farmers and MPs, has so far been fiercest in Wales and Scotland. But what critics call a ‘land grab’ is spreading fast across England, too.

Those in favour of turning farms into forests point out that Britain currently imports more than 80 per cent of its timber and say we need to hit the Government’s ambitious tree-planting targets to achieve our climate change goals. Others accuse the landowners of ‘greenwashing’ – boosting their environmental credentials at the expense of local livelihoods and Britain’s food security. 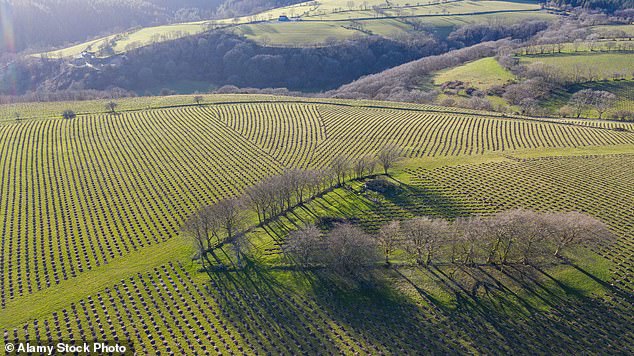 The carbon offsetting boom has been boosted not just by profits from selling tractor-loads of timber but by a new and highly lucrative market in trading the ‘carbon credits’ the trees generate. These are a form of investment bond generated when a company or landowner removes a unit of carbon dioxide from the atmosphere. Bond holders – who remove more CO2 than they produce – can then sell them on a newly created carbon market.

They can be bought by other companies keen to offset their greenhouse gas emissions, or by traders on an emerging speculative market. Quite what sort of future the credits have is unclear.

Mark Carney, the former Governor of the Bank of England, has already compared the carbon offset industry to the Wild West.

The taxpayer provides further incentives, with landowners handed thousands of pounds in government subsidy schemes to plant trees instead of growing food.

A Freedom of Information request seen by the MoS shows, for example, that by March 17, non-Welsh companies had received grants worth £4.4 million to plant trees in Wales.

A recent report from the Scottish Land Commission showed that ‘non-farming investors’ are buying rural land in Scotland at an ever-faster rate.

Almost half the estates sold in Scotland last year went to large companies, investment firms and charities. In almost two-thirds of cases, these were secret, ‘off-market’ deals, with locals given little or no chance to bid. Hard-pressed farmers say speculators wishing to buy them out as the value of their land soars are offering up to five or six times the usual rate.

Galloway hill farmer Jim Ramsay says: ‘I heard one farmer was repeatedly cold-called by forestry companies asking if he would sell.’ 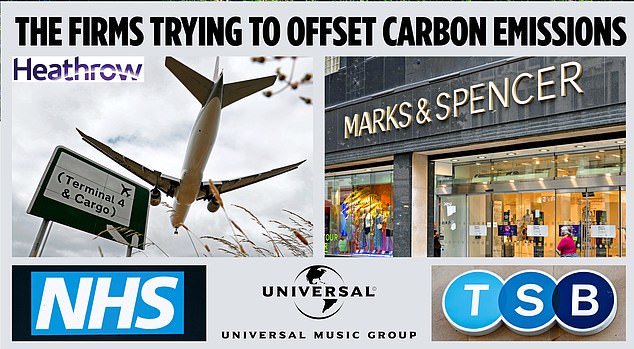 And the offers are tempting. As he puts it: ‘As the price goes up, you start to question what you could do with your life if you had that capital available.’

In Somerset, farmer Julian Westcott is selling part of his 120-acre sheep and cattle farm near Minehead after struggling to make a living from farming for the past 25 years. Yet planting trees on farmland is not the answer, he says.

He watched in disbelief as a productive arable farm at nearby Roadwater in the Exmoor National Park was turned over to trees, with local rumours suggesting a major airline is involved.

‘This should never be happening,’ he says. ‘Every acre of trees planted in Britain facilitates an acre of rainforest cut down overseas to produce the food needed in this country. It’s just big companies offsetting their carbon emissions so they can carry on with their dirty business polluting the planet.

‘These companies can trade carbon credits from the trees they plant, but farmers don’t get anything for the carbon we put into soil from good grassland management. It’s a joke, a complete and utter con.’

George Dunn, of the Tenant Farmers Association, is involved in cases in Yorkshire, Shropshire and East Sussex. In all three counties, he says, attempts are being made to cancel tenancies and take the land back for tree planting or for green initiatives such as solar panels and windfarms. Rewilding is another problem, he says.

Perhaps Britain’s most ambitious project is in the Scottish Highlands, where Danish billionaire Anders Povlsen, the owner of fashion site Asos, has acquired about 230,000 acres of Britain worth more than £120 million.

He has a 200-year plan to encourage native species including red squirrels, pine martins and golden eagles to return to northern Scotland – along with vast acres of woodland, of course. ‘These kind of things are vanity projects,’ says Dunn. ‘I think there is sufficient and untapped scope for biodiversity in farmed landscapes.

‘There has been a knee-jerk reaction and a lot of social-media hype about rewilding and tree planting. But I believe these projects will deliver little biodiversity net gain or better carbon management.

‘We need to take a more considered view of how we can deliver food and environmental security within farmed landscapes.’

For his part, Povlsen says he and his wife have a ‘love for Scotland’s nature’ and they have made a ‘significant and lifelong commitment’ to help ‘repair the harm that man has inflicted on [the Highlands]’.

Bryan Elliott, of Penrith-based Eucalyptus Renewables defends the tree-planting: ‘One of the reasons woodland creation fails in this country is because landowners fail to weed between the trees. We have planted rows of white clover between the trees to reduce the need for weeding and boost the nutrient levels in the soil. It’s all about balance – and we do need timber.’

But the signs from New Zealand, where this sort of reforestation is well established, are not encouraging. Farmers there report a cash ‘bonanza’ as speculators race to cash in on rising carbon prices – and they sell up.

Shepherdess Teleri Fielden, a spokeswoman for the Farmers’ Union of Wales, says it is often easier for firms to buy carbon credits than to make any real change to polluting behaviour. ‘Any company can buy assets to offset their carbon while trying to greenwash their way to net zero,’ she says.

Back in Carmarthenshire, where Foresight owns eight forestry sites, resistance to its plans is fierce. A petition by Cwrt y Cadno local Rhiannon Lewis, whose extended family has farmed the Cothi Valley for generations, has attracted more than 60,000 signatures.

‘If you extrapolate and imagine that all those farms were bought for forestry, you would end up with the area decimated, covered in forestry, with the little farmhouses in the middle probably lived in by holidaymakers,’ she says. ‘That impacts on the Welsh community and the Welsh language, which has largely been preserved in the rural communities. Virtually every farmer I know in the area is native Welsh-speaking.’

Foresight Sustainable Forestry said: ‘Foresight’s plan for Frongoch has been sensitively designed to incorporate a diverse mix of tree species, to include open spaces for natural habitat and to make a positive impact in the battle against climate change and the fight against biodiversity loss.

‘We will ensure that the pastureland in the valley basin (which represents a quarter of the overall site) will not be planted on and will stay in use as farmland. And residents who live downstream of Frongoch will benefit from our plans as the scheme directly reduces the risk of future floods.’

Ian O’Connor sees it differently: ‘If we, as a nation, are going to keep planting productive farmland and take it out of food production, in ten to 15 years’ time the next generation will have a problem with food security. We need to look at a more balanced approach, so carbon offsetting does not come at the expense of sustainable food production.

‘Planting trees also ticks the sustainability box, but at the moment hitting tree-planting targets seems to be a financial incentive for those with money, rather than supporting local young farmers like ourselves who also wish to become more carbon neutral, while feeding a growing population.’

It is a view echoed in the Southern Upland hills of Scotland. ‘The land is the tool of our trade and we can’t farm without it,’ says Jim Ramsay, looking out over his flock of blackface sheep. ‘To sacrifice rural Britain to absolve big business of their carbon sins does nothing but pay lip-service to eco-conservation.’