Follow
Home » World News » How Elon Musk came to own Twitter: A timeline of the Tesla CEO's takeover

How Elon Musk came to own Twitter: A timeline of the Tesla CEO's takeover

The $44 billion takeover of Twitter by Tesla (TSLA) CEO Elon Musk has created a series of chaotic events for the social media platform.

Since then, the company has had a volatile year, with Musk facing off against Twitter in a lawsuit before finally taking control of the platform. By October, the self-anointed "Chief Twit" made plans to fire 75% of Twitter’s workforce.

Here's a comprehensive look at one of the biggest love-hate business stories of the year:

Musk first joined Twitter in June 2009 and has amassed over 115 million followers since then.

Over the years, his tweets have created news headlines and even caused moves in stocks and the price of bitcoin.

Purchasing the app wasn’t in the picture until 2017 when a user asked Musk to buy Twitter, and he replied: “How much is it?”

While Musk has often tweeted about Twitter in various contexts over the past 13 years, the topics of his tweets began shifting in 2020 from memes and his company Tesla toward critiques about Twitter's algorithm, bot accounts, and how it's affected “public discourse.”

What should be done? https://t.co/aPS9ycji37

By January 2022, Musk started buying shares of Twitter. Two months later, he posed a question to his followers: "Free speech is essential to a functioning democracy. Do you believe Twitter rigorously adheres to this principle?"

Musk openly questioned how the free speech rules at the “public town square” that is Twitter were hurting democracy and publicly showed interest in building a new but similar platform. He also stated that if he were to acquire the company, he would reverse the Twitter ban on former President Donald Trump, as it was a “morally bad decision” in Musk’s eyes. (Trump was banned from Twitter following the insurrection at the Capitol on January 6, 2021.)

As he continued to buy Twitter shares, Musk became the largest shareholder with 73.5 million shares, according to the Associated Press, drawing attention from then-CEO Parag Agarwal, who offered him a position on the Twitter board. Musk rejected the offer.

Meanwhile, Musk was cooking up a deal to buy Twitter himself.

In April, it was announced via a security filing from Twitter that Musk proposed to buy the company for $43 billion, stating that it “needs to be transformed as a private company,” but the company put forward a “poison pill.”

A poison pill usually allows the board of a company to make the takeover as expensive as possible by creating new stock. This was a popular defense strategy in the 1980s by corporate boards if they believed a hostile takeover was underway. For Twitter, it would only be applicable when a shareholder amassed a stake of 15% or more, according to the Associated Press. Musk at the time had a 9.1% stake in the company.

The next step was to acquire funding for the now-$44 billion deal, and Musk had big names backing him up.

Musk sold $8.5 billion worth of Tesla shares and was able to obtain $7 billion in financial backing from tech investors like Sequoia Capital Fund, Oracle co-founder Larry Ellison, and the Crown Prince of Saudi Arabia, who provided him with $35 million in Twitter shares. The rest of the funding came from Musk's equities and a number of bank loans. Twitter's shares rose as more well-known names chipped in.

Public opinion in the U.S. about Musk at the time was mixed. On average, 17% of U.S. adults were very favorable of him, and most had heard of him but had no strong opinion, according to a Morning Consult survey.

However, in May, Musk halted his plans to buy Twitter. He questioned if the number of bots and fake accounts Twitter reported was accurate. By putting the deal “on hold,” many wondered if he would follow through on his Twitter plans, with one Forbes writer speculating that he was probably feeling “buyer’s remorse.”

A few weeks later, Musk threatened to end the deal if Twitter didn't provide him with information about bots and fake accounts. By July 8, he declared that he was officially walking away from the takeover offer, leading Twitter to sue him for not upholding the deal. Musk then countersued the company.

In August, Twitter’s former Head of Security Peiter Zatko blew the whistle on the company’s negligence in dealing with fake accounts and bots on the app, according to NPR. Musk used that to leverage his case against Twitter.

But before the trial could go to court, Musk changed his mind and went through with the originally agreed-upon deal of $44 billion.

As Musk entered Twitter headquarters with a sink in his hands, some employees took the exit door.

Rumors circulated that Musk would issue mass layoffs, prompting the number of resignation announcements on LinkedIn by Twitter staff to increase by 58% in the third quarter. Many of those employees were hired by Meta and Google.

"The bottom line here is that the uncertainty being generated by the fight between Elon Musk and Twitter is driving a lot of their top talent to other social media platforms," Greg Larkin, CEO of Punks & Pinstripes, told Business Insider. "These people have options as to where they can go and they're going."

As expected, Musk fired the Twitter board and made the company private. High-profile names like CEO Parag Agarwal, CFO Ned Segal, and Chief Legal Counsel Vijaya Gadde all left.

As part of Musk's workforce reduction plans, Twitter's content moderation team — dubbed the Safety and Trust team — shrunk from a few hundred employees to just 15 people, according to a report by Gizmodo.

Consequently, the number of racist, antisemitic, and hate speech-filled tweets have tripled on the platform since then.

Rapper Ye, formerly known as Kanye West, was also allowed back on Twitter after he was initially banned for tweeting antisemitic content.

November saw Twitter lose $4 million per day, according to Musk, who in turn laid off more than half of the Twitter workforce, citing the high revenue loss.

However, the layoffs came without enough notice, employees asserted. Federal and California labor law requires employers to inform employees as early as 60 days prior to mass layoffs. Naturally, laid-off employees filed a lawsuit against Twitter for not meeting this requirement.

Advertisers also began leaving the platform — some who didn’t agree with Musk’s ethics and some who left because of the Twitter Blue subscription crisis. 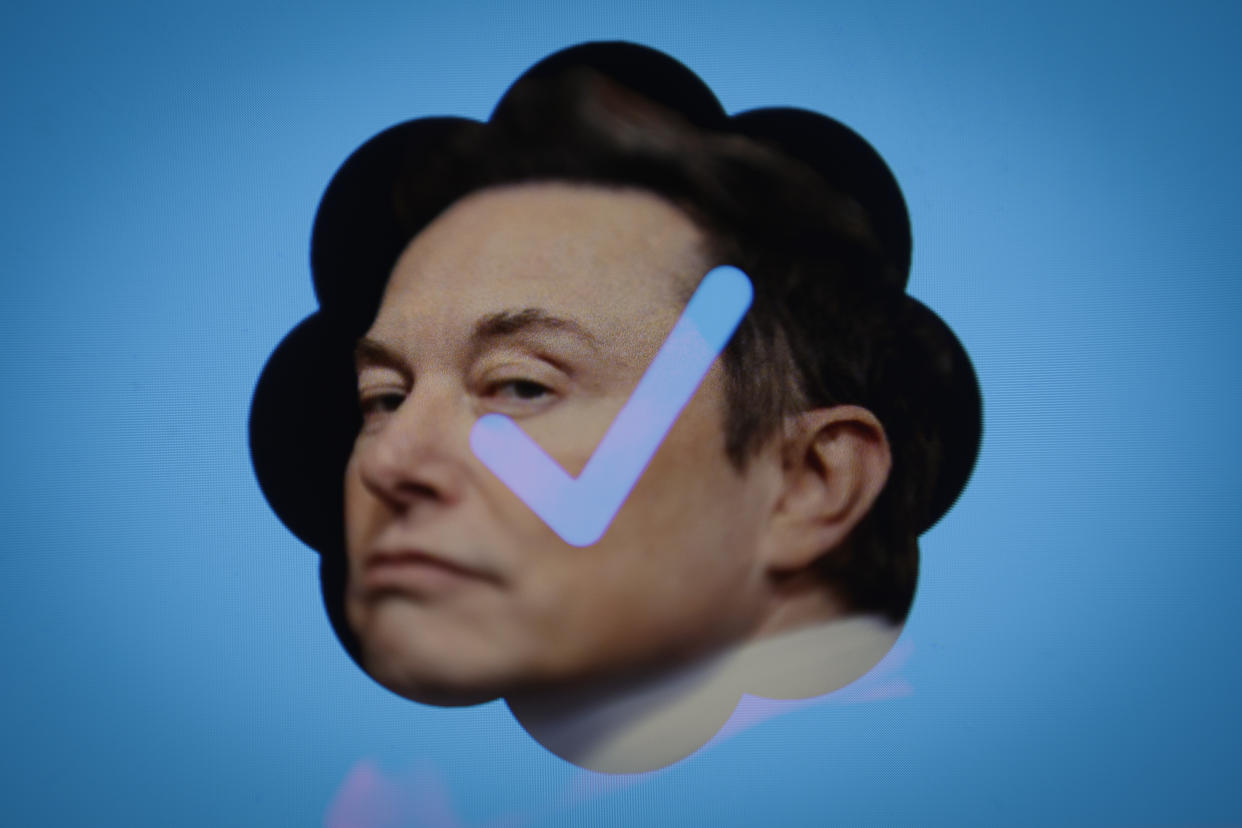 Twitter Blue was first launched in June 2021 in Canada and Australia for $3-$4 a month. It provided users with special features like bookmark folders and the ability to undo or edit a tweet. Under Musk, it was initially advertised for roughly $20 a month but decreased to $8 a month after backlash from users. The new Twitter Blue subscription also provided users with a verified checkmark.

Unfortunately, it led to users impersonating brands and companies with a verified checkmark and tweeting false claims as those companies, driving away advertisers from the platform.

Meanwhile, the debate about whether Musk owning Twitter is a concern for national security reached the White House.

“I think that Elon Musk’s cooperation and/or technical relationships with other countries is worthy of being looked at, whether or not he is doing anything inappropriate,” President Biden said in response.

The toppling dominos of chaos continued at Twitter when the top executives of Twitter resigned, and Musk hinted at possible bankruptcy of the company. He also temporarily paused the Twitter Blue verification subscription and let his other company SpaceX buy an ad campaign on Twitter.

As of Nov. 14, Twitter has fired nearly 4,000 contract workers and ended its remote work option as well as some employee benefits.

Amid the turmoil, Musk issued an ultimatum to the remaining staff: Commit to his "hardcore" work culture or leave with three months severance pay.

On Nov. 16, it was reported that Musk is looking for his successor at Twitter, though it likely won't be anyone who previously helmed the position. When asked by a Twitter user if he'd return to his old role as CEO, Jack Dorsey simply replied: "Nope."

The complete meltdown of the app started the night of Nov. 17, the deadline for Twitter staff to respond to the ultimatum. The "hardcore" work culture asked employees to work extra hours, according to a recording from a company meeting, and for staff to work with a "maniacal sense of urgency."

Since then, a mass departure of employees has occurred. Vital servers, which were manned by several engineers, may now be left unchecked. Many of these servers run the security as well as basic functions of Twitter, and a former Twitter engineer had warned of an outage a few days ago. Many of these servers now don't even have a "skeleton crew." The same day, Democratic senators issued an open letter to the Federal Trade Commission (FTC) to investigate Twitter for violating consumer protection laws.

Musk abruptly shut down the Twitter offices until Nov. 21, as not even half of the employees agreed to his ultimatum. An internal Twitter Slack message revealed that the shutdown was to “prevent physical sabotage while [the company] sort[s] out access revocations,” Fast Company and Insider reported. With not enough workers to manage the platform, #RipTwitter and #GoodbyeTwitter began trending as fears of Twitter shutting down intensified.

To resolve the issues, Musk has asked those "who actually write software" to fly to Twitter headquarters in San Francisco to help him "better understand Twitter tech stack."

He also joked about the situation on Twitter with memes and asked users: "What should Twitter do next?"

Alexandra Garfinkle contributed to this story.

Tanya is a data reporter at Yahoo Finance. You can follow her on LinkedIn.

Click here for the latest technology business news, reviews, and useful articles on tech and gadgets