How lockdowns changed animal behaviours at the zoo

Under chaos theory, a butterfly flaps its wings in Brazil and causes a tornado in Texas. But what happens when humans disappear from a zoo’s butterfly enclosure for months for the first time in history?

In this case, a global event, the COVID-19 pandemic, caused a butterfly to flap its wings more. 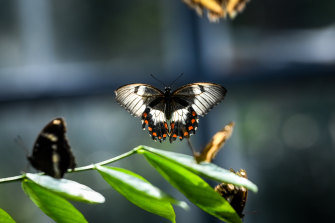 When Melbourne Zoo fell quiet during pandemic lockdowns, butterflies immediately occupied all the walking paths in the butterfly enclosure.Credit:Justin McManus

At Melbourne Zoo, there was a surge in activity as butterflies “reclaimed the space”, almost immediately occupying the walkways for human visitors that most of the insects rarely used.

The change in their behaviour, a phenomenon extremely difficult to observe in butterflies, is just one of the research projects being undertaken around the globe into the effects of pandemic lockdowns and the lack of human traffic on zoo animals.

Dr Sally Sherwen, Melbourne Zoo’s director of wildlife conservation and science, said the speed of the butterflies’ embrace of their changed environment demonstrated the adaptability of wild animals.

“[They were] using all pathways instead of the vegetation area – there are always butterflies that land on people, but there was more activity throughout the whole building.” 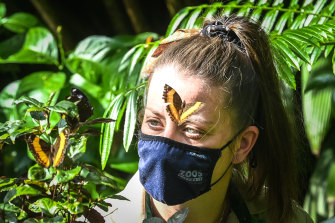 The change in butterfly behaviour had not been observed before.Credit:Justin McManus

“[They responded] immediately to the change. Visitors come back and they just change their behaviour again.”

Dr Sherwen, who did her PhD on how animal and human behaviours influence each other, noted the pandemic had shown how humans are much more fixed in their ways than wild animals, and experienced greater struggle with change.

“On a day-to-day scale I don’t think we are anywhere near as adaptable as the natural world,” she said.

Interestingly, few zoo animals’ behaviour changed significantly, though one UK study found that meerkats were more active in the absence of human visitors. 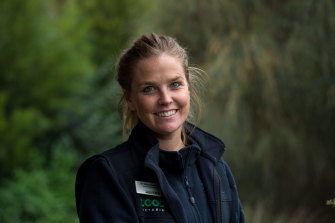 Dr Sherwen said this was because of a philosophical shift in zoos in the past decade to minimise keeper and visitor contact with animals, a marked change from the previous approach in which zookeepers were “part of the herd”.

This is so the animals can live lives that mirror their existence in the wild as much as possible, with herd behaviour and their relationships with each other evolving naturally. It also gives visitors a more authentic experience of animal behaviour in the wild, she said.

Zoo enclosures are also designed to give animals spaces where they can retreat from the public eye and interact with humans as much or as little as they want.

“The only thing that really does change in those [lockdown] periods is the visitors and the associated noise and smell,” Dr Sherwen said.

Another Melbourne Zoo group whose behaviour shifted during lockdowns were the orangutans, which appear to enjoy watching humans as much as zoo visitors enjoy watching them. Dr Sherwen said the great apes spent less time in areas of their enclosure where they would usually interact with visitors. 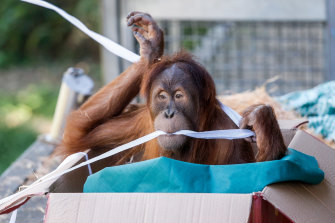 Melbourne Zoo’s orangutans spent less time in areas of their enclosure in which they normally interact with human visitors.Credit:Wayne Taylor

“The orangutans do like a people-watch every now and then … there are opportunities for play and positive interactions with people,” she said.

“This weekend they will be spending a bit more time up on the platform [interacting].”

Domestic animals were much more affected by the pandemic, Dr Sherwen said, because they became used to having their owners around all the time, with several studies noting dogs in particular became more reliant on human company.

The butterfly observation at Melbourne Zoo, which is previously unreported and set to go to peer review, is a small example of a larger phenomenon of how wild animals reacted to the urban environment falling quiet for months at a time.

“Without doubt there is a lot more activity,” Dr Sherwen said. “As humans change behaviour, less busy roads … the animals start to reclaim the space … people have reported [many] more birds around.

“Here in metro Melbourne [there’s] birdlife that is incredible all around us. We have the most amazing species.”

However, Dr Sherwen said it was important to note that being confined to our homes meant we also took more notice of the natural world around us; many of us may have for the first time observed animals that were there all along.

“People don’t realise how much wildlife lives in our urban environment. Even some of our threatened species are in relative urban areas,” Dr Sherwen said.

“That connection to nature and wildlife is a real positive out of COVID. We’re less distracted and more focused on nature… It’s a really nice habit to carry forward.”

animal, b, Changed, How, lockdowns
You may also like: