How soldiers raided offices of Russian version of Sesame Street

Since the debut of Sesame Street in 1969, the likes of Bert, Ernie, the Cookie Monster and Elmo have become global icons.

The cast of Muppets are now at the head of a franchise that millions of children and adults alike adore.

But in Russia, the domestic version of Sesame Street did not hit TV screens until 1996 – five years after the collapse of the Soviet Union.

And the show made it to screens despite the fact that the production team’s offices were at one point raided by soldiers, who seized scripts, set drawings and even a life-sized Elmo puppet that was the office mascot.

Now, a new book by producer Natasha Lance Rogoff tells the incredible story of the struggle to make Ulitsa Sezam, which ultimately ran until 2010 – when ‘Putin’s people’ at Russia’s TV networks took it off air.

In a further sign of the febrile, uncertain post-Communist atmosphere that Ms Rogoff was working in, several heads of Russian television who she was collaborating with were assassinated before the show had even aired. 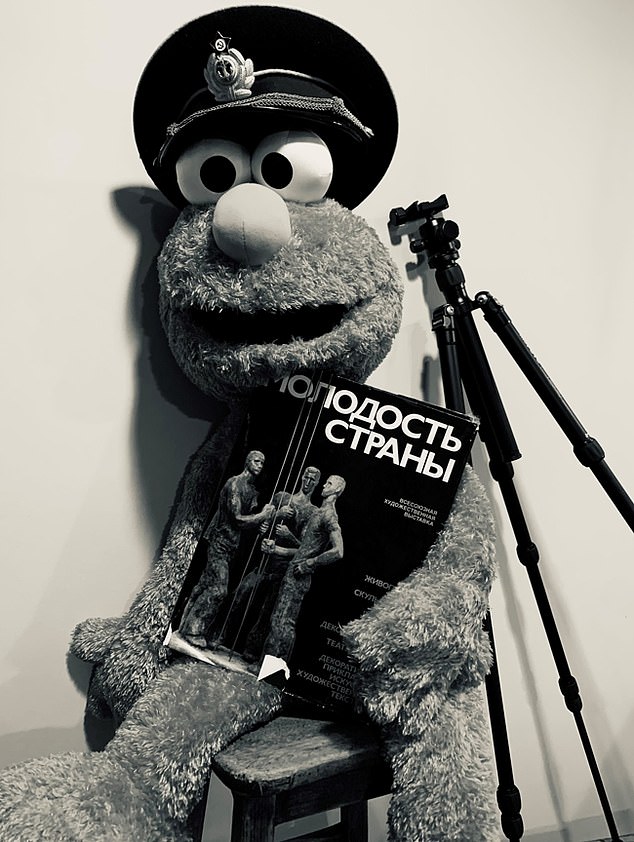 In Russia, the domestic version of Sesame Street – Ulitsa Sezam – made it to screens despite the fact that the production team’s offices were at one point raided by soldiers, who seized scripts, set drawings and even a life-sized Elmo puppet (pictured) that was the office mascot 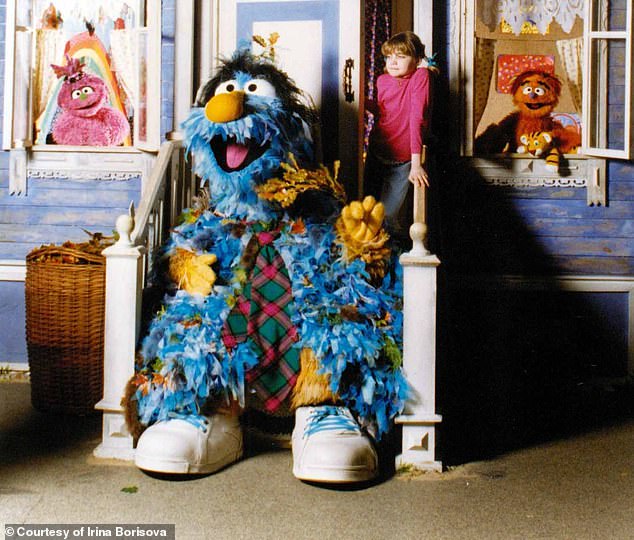 Ulitsa Sezam – did not hit TV screens until 1996 – five years after the collapse of the Soviet Union. Above: Russian Muppets Businka (left); Zeliboba (centre) and Kubik on set with actress Katya Mikhailovskaya

Ms Rogoff had fallen in love with Russian literature as a teenager, prompting her to change her legal first name from Susan to Natasha.

After studying Russian in college, she moved to Leningrad (now Saint Petersburg) as an exchange student.

The producer wrote articles about the underground culture in the Soviet Union, including one about the gay scene in Russia in 1983.

She even married a gay friend to help him escape persecution by the government.

Once back in the US, Ms Rogoff’s ambitions to become a diplomat were scuppered by the FBI’s refusal to give her the level of national security clearance she needed.

So she returned to Moscow and began working as a TV producer.

The call from the makers of Sesame Street – Children’s Television Workshop – to produce Ulitsa Sezam came in 1993, but it would ultimately take nearly four years before it hit Russian screens.

The project had the support of both American and Russian government officials – despite the fact that in 1973, after Sesame Street had expanded to Brazil, a Soviet Communist Party newspaper had said the show’s growth abroad was a ‘clear example of veiled neocolonialism in cultures.’

The hope was that the Russian version would help young viewers cope in the country’s new market economy – with the Muppets acting as mascots of democratic values.

But his support disappeared in July 1994, when his car was blown up by a bomb and he fled to Britain. 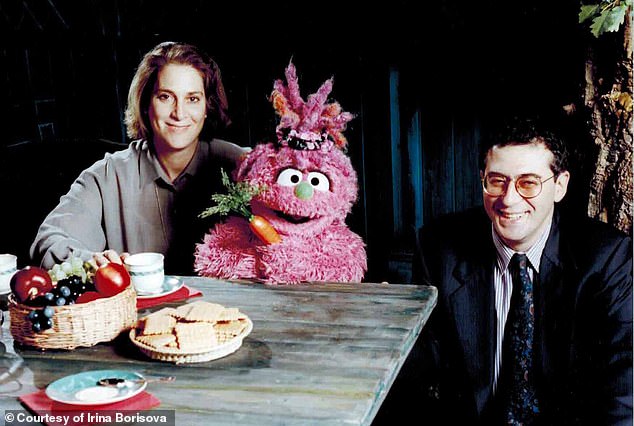 A new book by producer Natasha Lance Rogoff tells the incredible story of the struggle to make Ulitsa Sezam, which ultimately ran until 2010 and featured domestic characters that included nine-foot blue tree spirit Zeliboba and pink and orange monsters Businka and Kubik. Above: Ms Rogoff with Russian producer Leonid Zagalsky 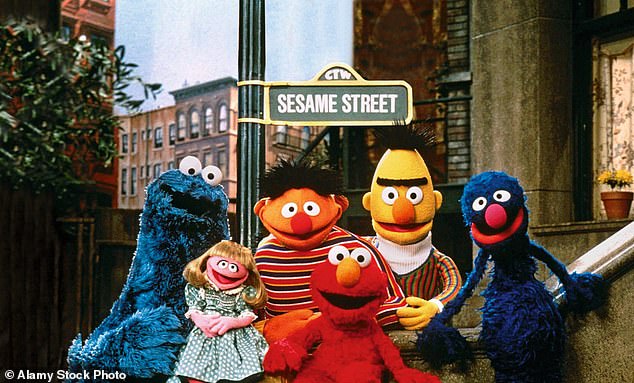 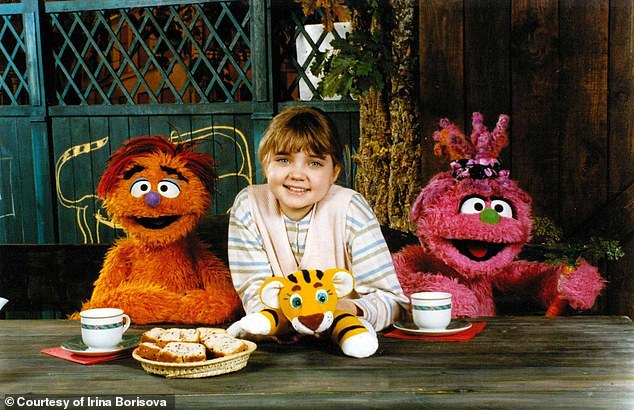 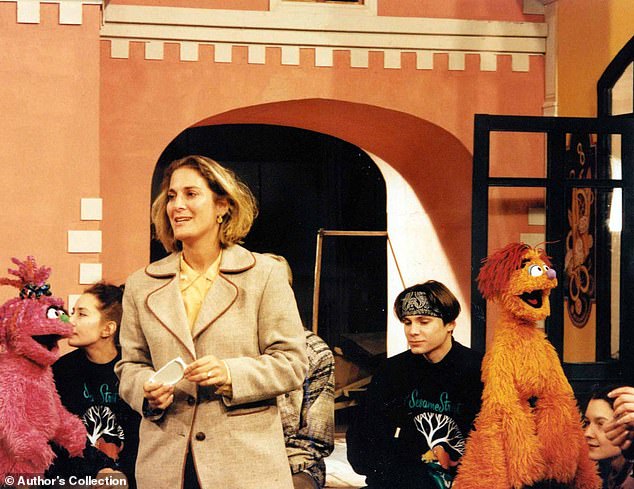 The call from the makers of Sesame Street – Children’s Television Workshop – to produce Ulitsa Sezam came in 1993, but it would ultimately take nearly four years before it hit Russian screens. Above: Ms Rogoff on set during the first day of shooting the show 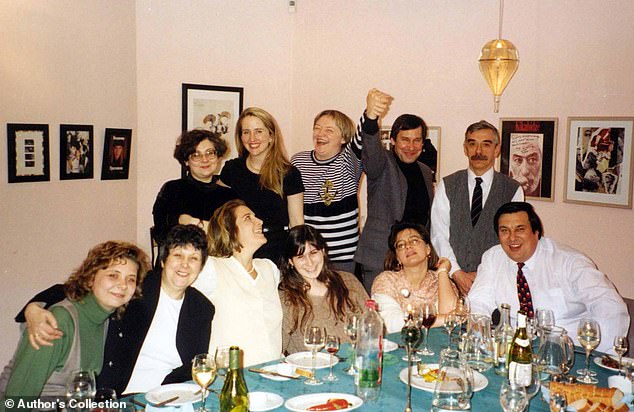 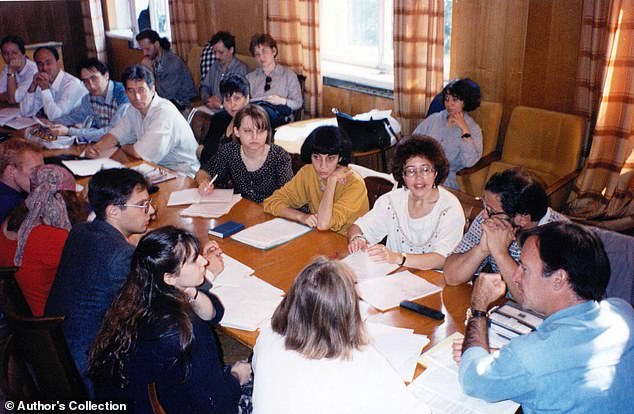 Luis Santiero, Sesame Street writer (right corner), with the Russian team of Ulitsa Sezam scriptwriters in Moscow. Initially, the head writer – who was Russian – wanted to hire only established authors of Russian literature; even though the fruits of their efforts were abstract scripts that children would not understand

He became a fierce critic of Russian president Vladimir Putin and died in 2013.

Another backer, Russian TV executive and journalist Vladislav Listyev was murdered in 1995, and the crime has never been solved.

Fortunately, before his death, Ms Rogoff had worked closely with him to ensure that Ulitsa Sezam would air.

Ms Rogoff’s team also had to deal with the terrifying upheaval caused by the raiding by soldiers of their offices in Moscow. The producer is still unsure what the reason for the raid was.

At the time of the raid, the team were preparing to send the show’s budget to the US so it could be approved and they could get the money they needed to film it and put it on air. 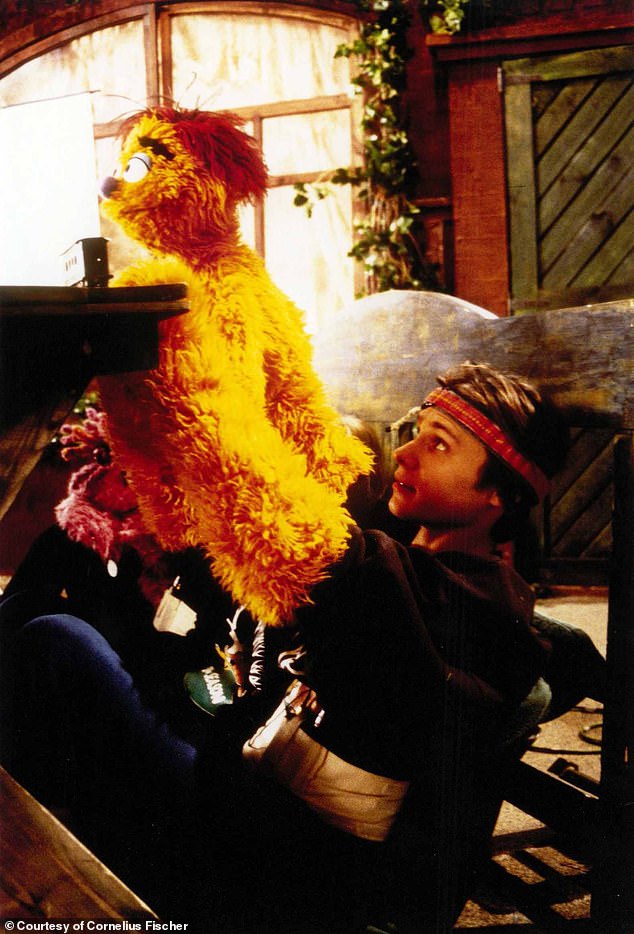 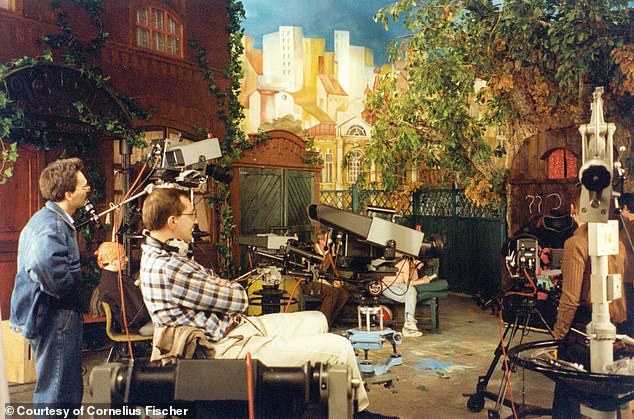 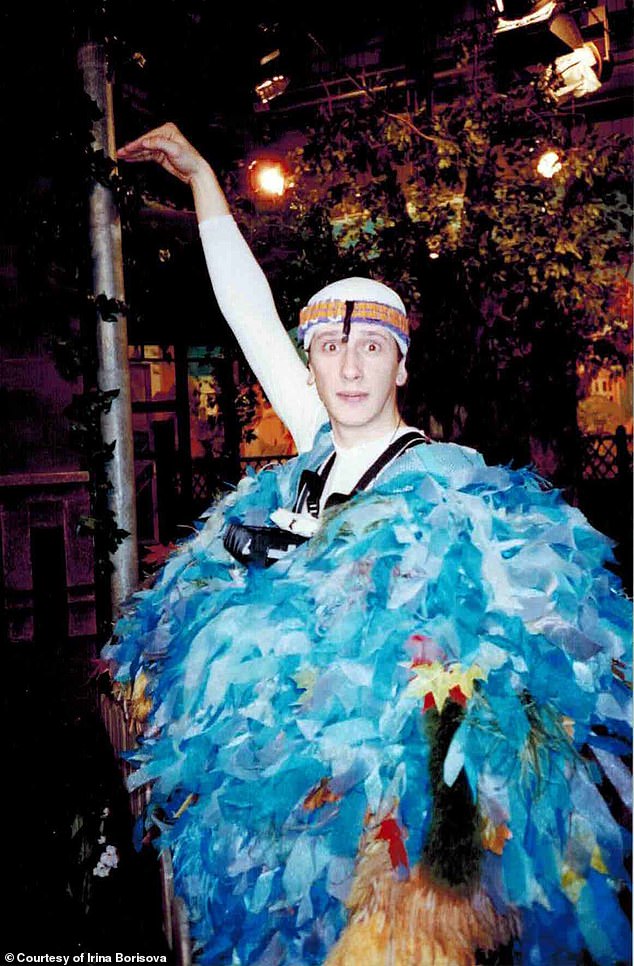 Stanislav Klimushkin, puppeteer performer of Zeliboba, rehearsing in partial costume at the studio

Ms Rogoff was told of the raid on the phone as it was happening. She tells in her book how colleagues scrambled to fax the budget to America as soldiers rampaged through the office.

She describes how a soldier told the team that they had ‘ten minutes’ to do what they needed to do.

Afterwards, she was told how one of the men ‘stole Elmo’. Colleague Misha told Ms Rogoff: ‘I tried to save Elmo by grabbing him out of the soldier’s arms, but the commando yanked him from my grasp.’

The team speculated that the soldier took the puppet to give to his child. The soldiers also took scripts and equipment and closed the office.

However, the team were able to continue shooting the show by using borrowed equipment.

Besides this ordeal, Ms Rogoff faced constant battles with Russian members of the development team.

She was told: ‘Russia has a long, rich, and revered puppet tradition dating to the sixteenth century. We don’t need your American Moppets in our children’s show.’

The head writer – who was Russian – wanted to hire only established authors of Russian literature; even though the fruits of their efforts were abstract scripts that children would not understand.

Ms Rogoff also had to fight a months-long battle with Ulitsa Sezam’s music director to ensure that the show would feature more than just Russia’s ‘world renowned’ classical music and would include contemporary hits as well.

When the show finally made its debut in October 1996 after the artistic tussles were resolved, it proved to be a big hit.

Ms Rogoff says that Zeliboba, Kubik and Businka became as recognisable to children throughout the former Soviet Union. 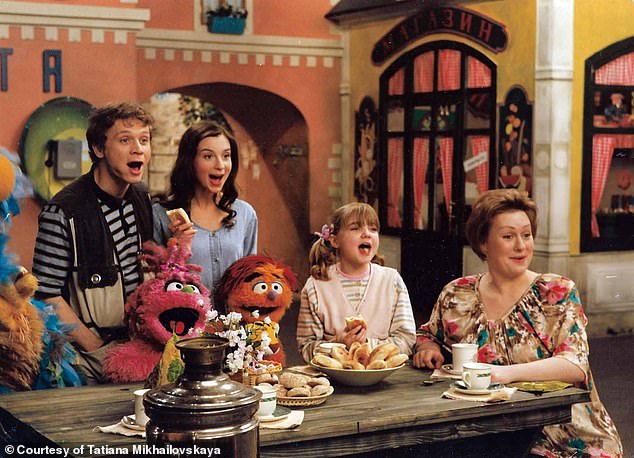 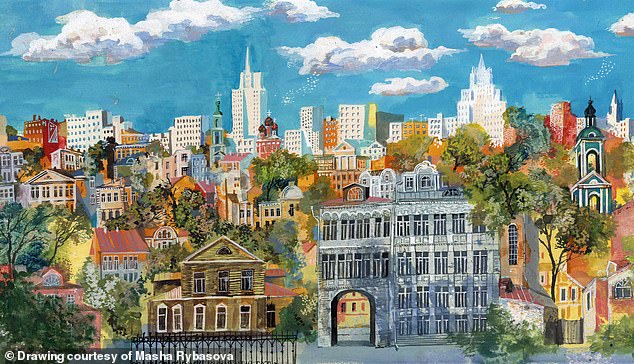 It aired one day a week on channel OTV and six nights a week on rival NTV, reaching millions of children across Russia, as well as youngsters in Ukraine and the Baltic states.

Ms Rogoff ultimately produced 52 half-hour episodes over the course of two years. After she departed the project in 1998, Ulitsa Sezam continued until 2010.

She claims in her book that it was taken off air because it was ‘no longer supported by Putin’s people at the television networks.’

Writing in her book about why she stayed in Russia to see through the completion of Ulitsa Sezam, Ms Rogoff says: ‘What made me stay, even in the face of physical violence jeopardizing the production, were the fascinating cultural battles that touched almost every aspect of the show—from the scriptwriting to the music, to the creation of the Slavic Muppets themselves.

‘The clash of divergent views about individualism, capitalism, race, education, and equality offered a window into the cultural discord and conflict between East and West that continues to dominate relations today.’ 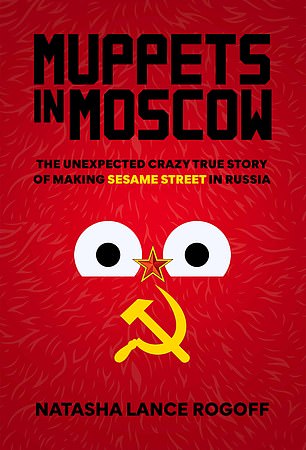 The first international version of Sesame Street was launched in Brazil in 1972, under the name Vila Sesamo.

Since then, more than 30 countries around the world have created their own versions of the series.

As well as Bert, Ernie, the Cookie Monster and Elmo, other famous characters include Big Bird and Kermit the Frog.

The ethos behind the show was to provide educational content to pre-school age children.

Teachers and psychiatrists were consulted to make sure that children would find the show engaging, and that they could be taught without even realising it.

The Muppets themselves were created by American animator Jim Henson.

Muppets in Moscow: The Unexpected Crazy True Story of Making Sesame Street in Russia, by Natasha Lance Rogoff, is being published in hardback on January 23 by Rowman & Littlefield.