The week started like any other. V/Line driver Mike James*, based at Southern Cross Station, signed in at the drivers’ depot, yarned with colleagues and took his seat in the cabin of a V/Locity train, alongside a trainee.

He drove trains for two days with the trainee in tow – neither were required to wear masks in the cab – then discovered last Thursday that he had caught COVID-19. He had been at work for four days and was asymptomatic when he returned the positive test. 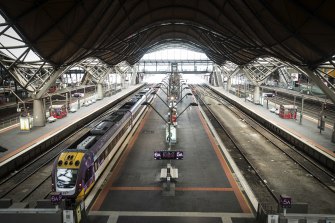 The V/Line rail system has been largely shut for more than a week, with about 300 drivers isolating over several days. Credit:Darrian Traynor

The trainee, three drivers and a station assistant caught COVID-19 from Mr James, who had interacted with colleagues at the Southern Cross depot nicknamed the “Tissue Box”.

A conductor also caught the virus from the community.

What followed was a shutdown of Victoria’s regional rail network: thousands of services spanning 3500 kilometres of track, stretching right across the state.

Hundreds of drivers went into isolation. By Sunday, the number of V/Line staff with COVID-19 was at seven. State COVID-19 response commander and former public transport chief Jeroen Weimar has described the tea rooms where people remove masks to eat and socialise as a “dangerous place”, prompting a statewide ban in the construction sector.

As cases started to rise in the construction and rail industries, Mr Weimar warned efforts to minimise the spread of COVID-19 would be “destroyed … if we’re all going to sit together and have lunch together every day”.

But day in, day out, for the past year and a half, this is more or less what train drivers have been doing at Flinders Street and Southern Cross. Hundreds based at the city stations sign in, eat lunch and socialise in rooms described by drivers as “tight” and “cramped”.

Drivers use these facilities for meal breaks, while some pass the time during “standby shifts” – back-up shifts to plug holes when drivers call in sick. Without anywhere else to go during lockdown, the drivers use the gym and showers in these areas, watch TV or find a spot for a snooze.

There are sometimes up to 50 drivers in a small room, drivers say. Social distancing is not enforced. Often, only about half of the drivers wear masks. A photo sent by one shows people gathering in a drivers room in Flinders Street on Tuesday last week, just days after the outbreak.

Former deputy chief health officer Allen Cheng said these were challenges facing many workplaces, particularly hospitals. He said the key was ensuring tea rooms were ventilated, with limits on the number of people who could enter and widespread use of QR codes. Having workers operate in “bubbles” to reduce the risk of transmission would help, he said.

“Tea rooms are very well recognised as a place where transmission occurs and that’s in every industry,” the infectious diseases expert and Australian Technical Advisory Group on Immunisation co-chair said. “It’s a pretty high-risk area.”

V/Line is now in the throes of a disaster scenario. The rail system has been largely shut down for 10 days, with about 300 drivers isolating over several days. Disruptions are expected for weeks.

Drivers say they are receiving texts at midnight from V/Line instructing them not to come to work. Many miss the texts on their company phones, which they switch off at home or leave in their lockers.

Word of the outbreak has spread quickly among drivers. A closed Facebook page for drivers blew up with the news and people who were in the Tissue Box with the infected driver started isolating before they were contacted by the Health Department and V/Line.

Metro chief executive Raymond O’Flaherty said the company had “learnt lessons” from the V/Line outbreak, which could “easily” have happened at Metro.

Both Metro and V/Line are looking to add more meal rooms, segregate workers and ramp up antigen and temperature testing.

Metro wants to roll out antigen tests for its 125 train controllers, who are crucial in running the network. Controllers can work from a secret “disaster” site if their room becomes an exposure site. Metro also ran scenario planning last week amid the V/Line outbreak, requiring managers to respond to a situation in which six front-line staff test positive to COVID-19.

The company realised it needs to train more people to do contract tracing and is developing a bespoke training program.

Mr O’Flaherty said he did not believe a full shutdown of the suburban network was likely due to the high number of drivers who were on standby. But the closure of one or a group of lines during outbreaks was conceivable.

“We’ll never be able to remove all the risk we are exposed to, but if something does happen, I want to avoid a scenario where I have to shut down the entire network. We want to make sure if there is an outbreak at Metro, it would be a scaling back if we have to do something, so we’d be able to contain the outbreak to a bubble of people. That’s the objective here.”

Both operators will look to buses to fill gaps when trains are down due to COVID-19 outbreaks.

Bus drivers are more exposed to commuters than tram and train drivers, due to the vehicle’s smaller size and the lack of a separate compartment with ventilation system. But a key factor shielding the bus network from total shutdown is the lack of any centralised depot for drivers and fleets, with many bus companies operating separate facilities across the state.

There have been few COVID-19 cases in the public transport sector, despite thousands of workers continuing to show up on the railways throughout the pandemic, mixing with commuters and colleagues. Of the more than 16,000 employees at Metro, V/Line and Yarra and in the bus network, there have been only 45 cases since the start of the pandemic.

But in the face of the highly infectious Delta strain, operators must constantly rethink policies, with Metro’s Mr O’Flaherty signalling he believes mandatory vaccines have merit in the sector.

The regional rail operator has suspended one-on-one training activities and is reviewing its training and COVID-safe procedures.

The Transport Department’s head of transport services, Nick Foa, said operators’ COVID-safe plans “continue to evolve” and commuters could be assured public transport was safe, “with strong protection in place such as deep cleaning, hand sanitisers, mandatory masks, QR codes, extra services and information on capacity … keeping them safe as they make their essential journeys.”

*Not his real name.

How, outbreak, the, unfold, V/Line
You may also like: