Terrifying footage shows the moment a hunt saboteur was mown down by a horse and left injured when riders charged towards him.

Sam Morley, 37, from Stoke on Trent, claims he is lucky to be alive after a member of the hunt ploughed into him in Ash Magna, Shropshire, leaving him hospitalised on Saturday afternoon.

Mr Morley had been monitoring the North Shropshire Hunt when the group of around 15 to 20 riders ‘deliberately’ rode towards him in a field, he says.

His footage captures the moment the 92-stone (600kg) horse smashed into him sending him crashing to the ground in agony. 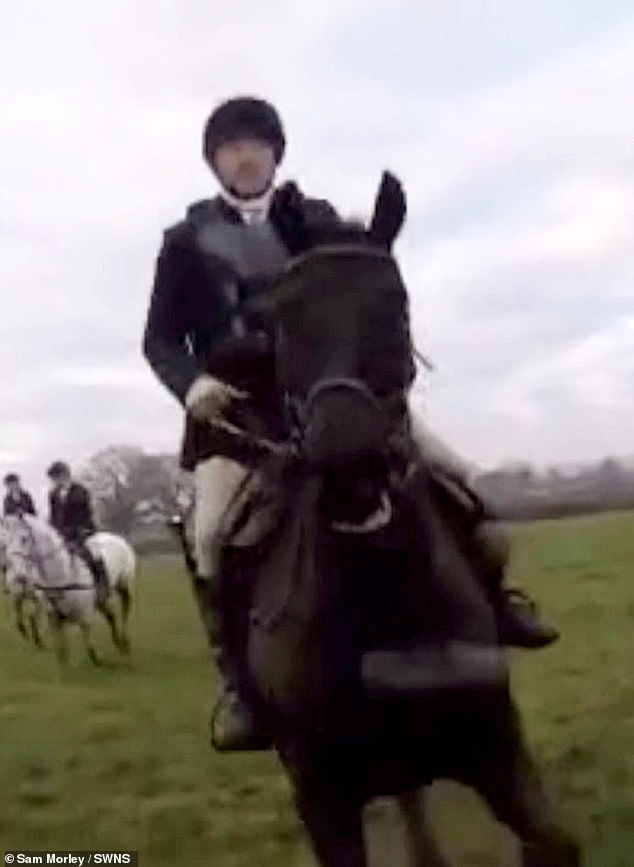 Sam Morley, 37, from Stoke on Trent, claims he is lucky to be alive after a member of the hunt ploughed into him in Ash Magna, Shropshire, leaving him hospitalised on Saturday afternoon

Mr Morley takes the full impact of the horse while a colleague says: ‘We’ve got a sab run over by a horse.

The 37-year-old can be heard saying: ‘I felt everything in my back and neck crunch. Where am I bleeding? It’s all on camera.’

The factory worker was transferred to hospital on a spinal board after paramedics and police were called to the scene.

Mr Morley has been left with concussion, a swollen temple and muscular trauma to his neck and upper back and has been unable to work since.

The 37-year-old said: ‘We had been monitoring the group to make sure they were not hunting foxes and I was on a public footpath through a field at the time.

‘A group of around 15 to 20 horses galloped closely to us from behind at first, I guess in an attempt to intimidate us.

‘If that wasn’t enough, they then turned back around and started charging towards us.

‘We are told to stay still in these circumstances as you can never second the guess the direction the horses will go and the onus is on the rider to avoid a collision. 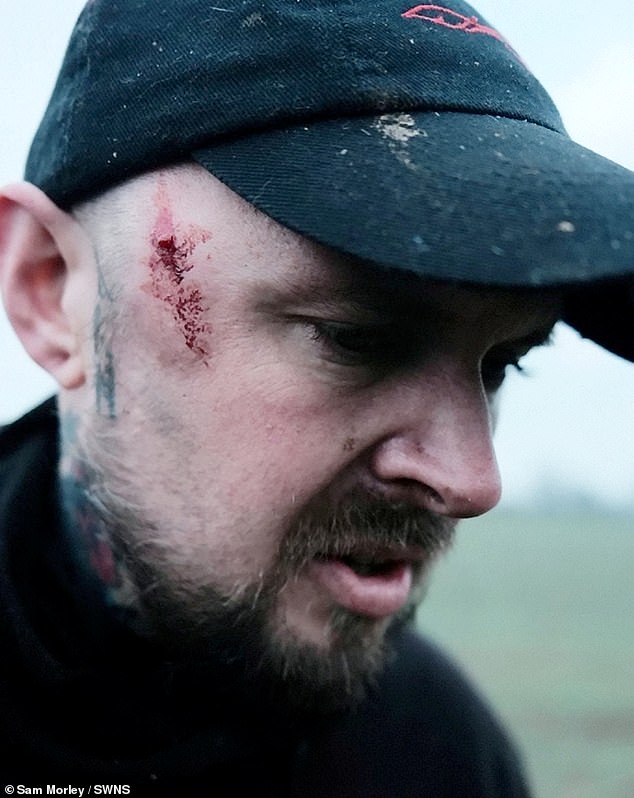 Mr Morley has been left with concussion, a swollen temple and muscular trauma to his neck and upper back and has been unable to work since

‘But this horse has crashed straight into me and I heard my bones crunch as it did so. I have no doubt it was deliberate and the footage speaks for itself.

He said: ‘I lost consciousness twice for a few seconds. These are 600kg animals and it’s like getting hit by a car.

‘It wasn’t a full gallop but it was going at a canter, I would say it must have been about 20mph and the impact just knocked the stuffing out of me completely.

‘Paramedics were called and I was taken away on a spinal board as they were concerned about the damage to my neck.

‘I had a CT scan which showed I had muscular trauma and I have been unable to go back to work since. I’m on anti-inflammatory drugs and painkillers and bedbound.

‘Police were shown the footage and I’d like to think there are grounds for ABH or GBH charges.

‘It’s pretty frightening when these horses bear down on you. They are bred for stamina and speed and they are huge animals.’ 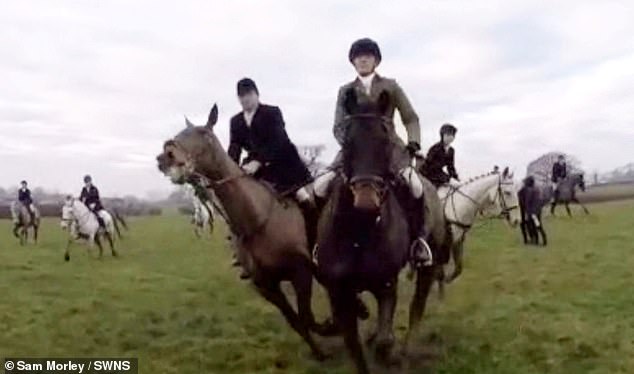 Mr Morley had been monitoring the North Shropshire Hunt when the group of around 15 to 20 riders ‘deliberately’ rode towards him in a field, he says

The footage has racked up almost 50,000 views on social media in 24 hours after it was released by the Staffordshire Hunt Saboteurs.

A spokesperson for the Staffordshire Hunt Saboteurs said the hunt member involved fled from the scene while Mr Morley was left stricken on the ground.

They added: ‘Thankfully the horses’ hooves somehow missed the sab’s body and his injuries are consistent with severe impact.

‘The sab attempted to walk but fell to the ground repeatedly, at one point losing consciousness briefly.

‘He was then able to walk for assistance and wait for an ambulance where he was told he was lucky to be alive. 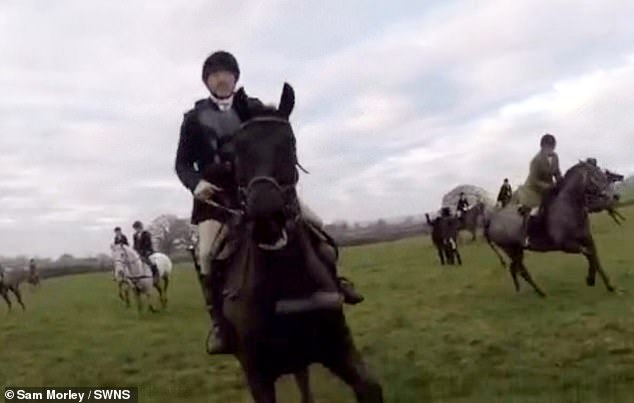 The spokesperson for the Staffordshire Hunt Saboteurs continued: ‘We believe much of the anger from the hunt yesterday came from sabs successfully moving hounds away from woodland where a fox had been sighted, which the huntsman was attempting to flush with hounds.

‘Consistent pressure from local sabs and monitors has repeatedly kept the hunt from killing this season.

‘Thank you to every one who has wished our sab a speedy recovery.

‘We hope he will be back in the field soon, and we will continue to work alongside the police in their investigation.’

A West Midlands Ambulance Service spokesperson said: ‘We were called to Ash Lane at 3:16pm on Saturday to reports of a patient who’d become injured after an incident involving a horse.

‘We sent one ambulance to the scene and treated a man for injuries not believed to be serious and he was conveyed to hospital for further treatment.’

A spokesperson from West Mercia Police said:  ‘We are aware of the video circulating on social media, and are carrying out investigations to understand if any offences occurred.’

MailOnline has contacted the North Shropshire Hunt and the Countryside Alliance for comment.