‘I can move on’: $1.5 million payout to St Alipius sex abuse survivor

A Victorian man who was sexually abused by Australia’s most prolific paedophile priest has reached a $1.5 million settlement with the Catholic Church, one of the largest payouts of its kind.

The now 58-year-old was abused by paedophile priest Gerald Ridsdale as well as Christian Brothers teachers Gerald Leo Fitzgerald and Stephen Farrell while a student at St Alipius Boys’ School in Ballarat in the 1970s. 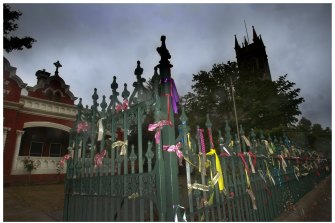 Ribbons tied to the fence at St Alipius Presbytery, church and old boys school in Ballarat pay tribute to the victims and survivors of child abuse. Credit: Simon O’Dwyer

On Friday he reached a $1.5 million settlement, plus costs, with the Christian Brothers and Catholic diocese of Ballarat. He is among hundreds of survivors who have sought compensation in the wake of landmark legislation that allows victims to sue the church.

While the victim went on to have a successful career as the executive of a multinational company, he has always struggled to trust men and has no male friends.

His life unravelled in 2015 after he gave evidence to the royal commission under the pseudonym BAQ.

“It made me face what I couldn’t face,” he said. “There was lots of pain but I never regretted the process.”

After recounting his traumatic childhood experience, BAQ nearly lost his marriage and quit a job that he loved. He hasn’t worked since.

“I reached the point where I thought, ‘I can’t do this anymore’ and after taking some leave I resigned.”

He said the settlement was an important step in the healing process.

“I feel vindicated and listened to. The church has taken responsibility for what they did to me,” he said. “It can’t erase the memory but I can move on.“

The abuse started when BAQ was around eight years old.

BAQ said he was chosen up to 20 times that year and the teacher kissed, cuddled and fondled his genitals.

”It was terrifying waiting each day to see who he would choose,” BAQ told the royal commission.

On an overnight school fishing trip in grade 5, Farrell unzipped BAQ’s sleeping bag and masturbated him.

BAQ recalled visiting Ridsdale at the presbytery, who asked the boy to remove his trousers and bend over. He was then abused.

Ridsdale is serving a 36-year prison sentence for abusing 69 victims, while Fitzgerald died in 1987 as he was being investigated. Farrell was sentenced to 18 months’ jail in 2018.

The survivor’s lawyer, Dr Viv Waller, said the payout was one of the state’s highest for an institutional sex abuse matter.

“It represents a significant shift in the amount of compensation that we have been able to obtain for sexual abuse survivors in institutional abuse matters,” she said, pointing out that victims had previously received “manifestly inadequate” payments as low as $15,000.

It follows the introduction of new laws in 2018 that revoked the Ellis defence, which once prevented victims from suing the church, as well as the abolition of time limits that restricted child abuse victims from seeking civil damages. 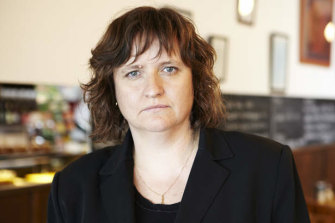 The Christian Brothers have spent more than $300 million on settlements to sexual abuse victims from 2013-2019, with the local wing of the religious brotherhood depending on huge injections of cash from its regional headquarters to meet its obligations.

The Australian order is also expecting to spend another $177 million as victims continue to launch lawsuits or seek compensation under the National Redress Scheme.

The Christian Brothers maintains it has the financial resources to meet its potential obligations, according to the organisation’s 2019 financial records.

Dr Waller has worked on 45 claims relating to St Alipius Boys’ School and said many victims in the Ballarat diocese were now seeking top-up payments after receiving “insulting” payouts in the past.

“It is possible in some circumstances for survivors to make an application to have their previous deed overturned, and to to seek additional compensation,” she said.

“The whole affair has been horrible,” he said. “A lot of people have been hurt because of what happened at St Alipius.”

A Christian Brothers spokesman said the order been meeting its obligations to those who experienced abuse for more than three decades.

“Payments run into the tens of millions of dollars annually and this represents the practical effect of the Congregation’s ongoing commitment to address the harm suffered as a result of child sexual abuse,” he said.