The Terminus Hotel in Melbourne’s inner north brands itself as “the locals’ local”, but those who live nearby say the pub is anything but.

Residents in a neighbouring block of units believe the North Fitzroy venue is exploiting an exemption introduced during the COVID-19 pandemic to operate a large beer garden in the hotel’s car park.

Dining and drinking rules were relaxed by the state government at the end of the 2020 lockdown to avoid people gathering indoors, which led to tables and chairs popping up outside venues across Melbourne. 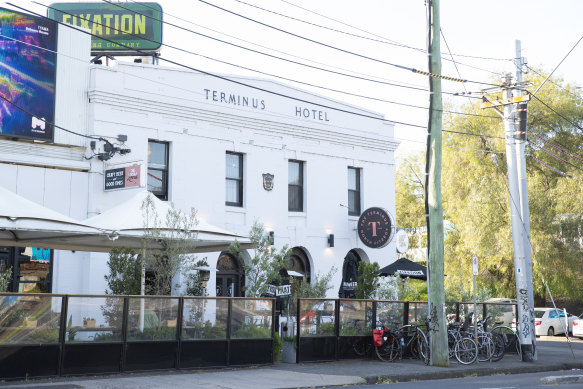 As some venues took over space on the street, the Terminus set up a marquee tent and artificial lawn with room for 200 people in its residentially zoned car park.

The beer garden was only supposed to be temporary during the pandemic, but the expansion could soon become permanent after plans were lodged with the local council to increase the pub’s capacity to 645 people.

“I used to go there all the time, I used to love that pub. I don’t go anymore, none of the neighbours do,” said resident Louisa Deasey.

“I love living in the inner city, I like noise. What they’ve done is turn that pub into something that isn’t for locals. It’s not just noise, it’s really aggressive shrieking, including from kids. It’s like [former all-you-can-eat Victorian restaurants] Smorgy’s.” 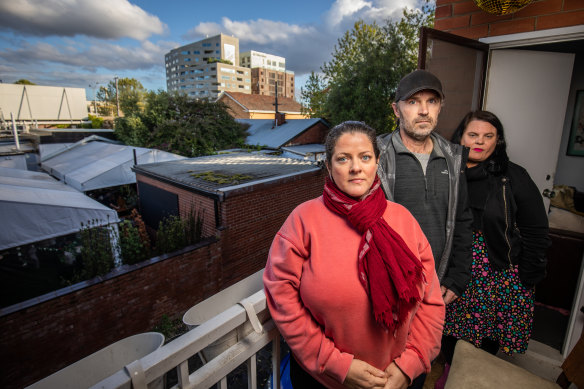 Residents of the block of units next to the Terminus car park, which was converted into a beer garden during the pandemic.Credit:Scott McNaughton

When the beer garden was first set up a couple of years ago, during the depths of the pandemic, locals said they supported it as they wanted the pub to survive.

But that goodwill has evaporated. Locals say the excessive noise and intoxicated patrons have made their lives miserable.

Residents have said drinkers look into their front windows, smokers light up next to their units and men urinate in their driveway.

Those with balconies overlooking the car park don’t use them when the beer garden is open for fear of being accosted by the pub’s patrons, while the nearby streets have become choked with cars.

The Terminus beer garden, with the neighbouring block of units in the background.

Complaints to Kick On Group, the company which owns the pub, and the local council have resulted in little change, they said.

“I can’t open my doors or windows when they’re in operation. The pub has shown no desire to alleviate our suffering,” said another resident, Natalie Jones, who claimed to have installed double-glazed windows with little effect.

“They call themselves ‘the locals’ local’ which is ironic. It’s so out of touch with the area that they are in.”

While the beer garden was often in full swing during weekends, residents said the space was also used for major sports events and other planned parties, usually without notice.

Plans have been lodged with council to make the beer garden permanent.Credit:Scott McNaughton

“Someone was hosting a wedding there, we could hear people’s speeches and the wedding music. I felt like I was there,” said resident Tomoko Hyakumura.

The Terminus’ owners recently lodged plans with the Yarra City Council to make the beer garden permanent as part of a $1 million-plus redevelopment.

The proposal includes increasing capacity from 443 to 645, live music and extending trading hours to 1am in parts of the pub.

Jesse Bates, an owner of one of the units next door, said the Terminus was becoming a “dominant” presence in the area with its plans for further expansion. 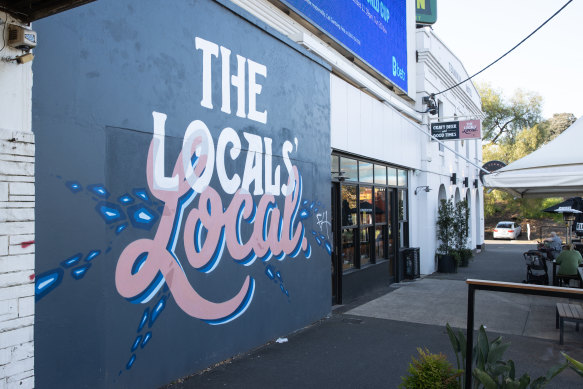 The Terminus brands itself as “the locals’ local”Credit:Simon Schluter

A Yarra City Council spokesperson said that officers had investigated residents’ complaints but did not find anything that breached local laws.

Craig Shearer, founder of Kick On Group, said he had purchased the pub in December 2019 on the eve of the COVID-19 pandemic, when the venue was closed for 262 days.

He said the pub was only able to trade again under the government’s outdoor dining program, which was introduced in October 2020.

“Throughout this time we have always operated within the required laws and conditions and had numerous inspections from local council, police, and liquor licensing,” he said in an emailed statement.

“On each occasion, the finding has been we are operating lawfully, and that no breaches [have] been committed.”

Shearer said a “very small number” of local residents had raised concerns with the beer garden, but the pub’s owners had tried to work collaboratively with them.

He said the outdoor area was closed at 10pm at the latest and was enjoyed as a dining attraction primarily for young families. 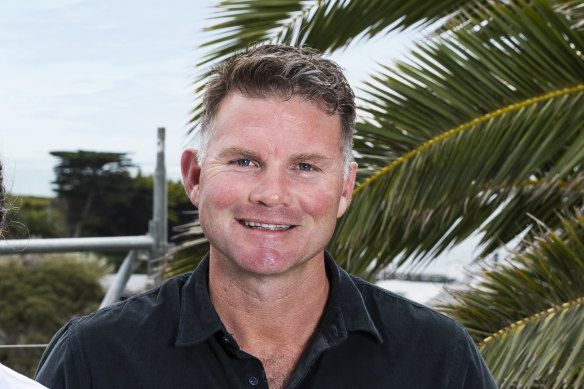 Craig Shearer, owner of the Kick on Group.

“The issues between the pub and the adjoining residents are not new, and did not suddenly start during COVID,” he said.

Shearer said the development plans would significantly minimise any ongoing tensions with its neighbours.

“We have designed a space that will allow families and diners to continue to use the amenity, without disruption to the tenants that are right next to the adjoining fence,” he said.

A spokesperson for Planning Minister Lizzie Blandthorn said venues would be allowed to trade outside without a permit until October 2023, one year after the end of the pandemic declaration.