Follow
Home » World News » ‘I have to live with it’: Indonesia quake survivor loses 11 relatives

‘I have to live with it’: Indonesia quake survivor loses 11 relatives

Cianjur, Indonesia: Enjot was tending his cows in the hills near his home when the earth shook.

The 5.6 magnitude earthquake killed more than 265 people, including 11 of Enjot’s family members. His sister-in-law and her two children were hurt, among the hundreds injured in Monday’s quake. 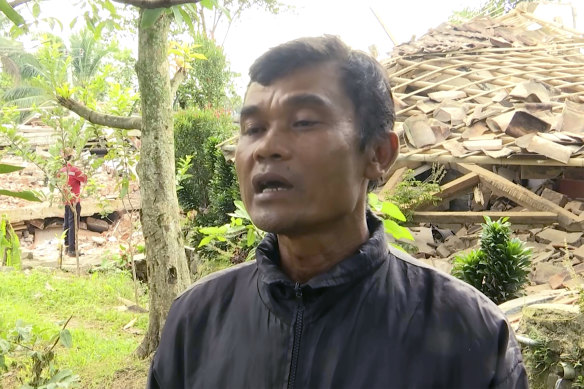 Enjot describes the events during the earthquake that hit his village on Java island, Indonesia. Credit:AP

Now, Enjot is visiting his hospitalised loved ones and trying to rebuild his shattered life, one of thousands of Indonesians reeling from the disaster.

“My life has suddenly changed,” said Enjot, 45, who goes by one name like many Indonesians. “I have to live with it from now on.”

The epicentre of the quake was just south of Enjot’s hometown, Cianjur. After getting a call from his daughter, Enjot hopped aboard his motorbike and raced home, arriving within a few minutes to see his neighbourhood flattened. 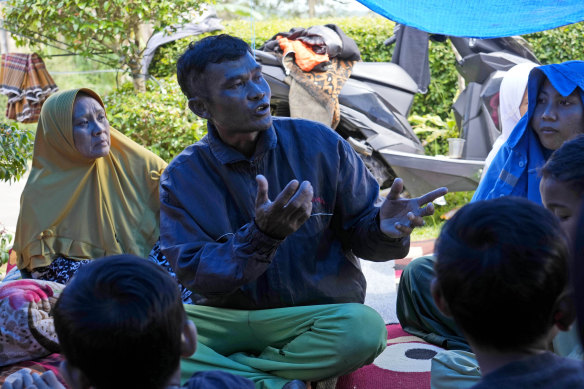 “Men, women and children cried while people who were trapped in the collapsed houses were screaming for help,” he recalled. “I saw terrible devastation and heart-rending scenes.”

His sister-in-law and her children, who were visiting from a nearby village, were among the more fortunate. Others heard their screams from the rubble and pulled them out.

The woman and children suffered severe head injuries and broken bones and are being treated in a hospital overwhelmed by the number of casualties.

According to the government’s National Disaster Agency, as of Tuesday evening more than 265 people were killed, with hundreds missing and injured, almost all in and around Cianjur. The toll was expected to rise.

Like many other villagers, Enjot desperately dug through debris looking for survivors, and managed to rescue several. But blocked roads and damaged bridges meant that authorities weren’t able to bring in the heavy machinery needed to remove larger slabs of concrete and other rubble.

Throughout the day, relatives wailed as they watched rescuers pull mud-caked bodies from the destroyed buildings, including one of Enjot’s nephews.

Not far from Enjot’s home, an aftershock triggered a landslide that crashed onto the house of one of his relatives and buried seven people inside. Four were rescued, but two nephews and a cousin were killed, he said.

In a neighbouring village, his sister, a cousin and six other relatives were killed when their homes collapsed, Enjot said.

Faced with such a sudden loss of life, and left without a place to live, Enjot is wondering what comes next.

He’s with thousands living in tents or other temporary shelters set up by volunteers, barely enough to protect them from monsoon downpours.

“The situation is worse than appears on television,” Enjot said. “We are starving, thirsty and cold without adequate tents and clothes, while no access to clean water.”

“All that’s left,” he said, “is the clothes I’ve been wearing since yesterday.”