Several groundbreaking things have happened to make the twice-postponed City of Sydney election, now proceeding on Saturday, historic. First: all six candidates for lord mayor are women. Given the disturbing treatment of women in federal politics this year, it’s a rare landmark worth celebrating, albeit at a local level.

Look what happens in that microcosm. I met and interviewed (for the Sydney Sentinel) all five of Lord Mayor Clover Moore’s challengers. I asked each their opinion of Moore. Not one engaged in mudslinging – only the mature ideological battle of policies. While each calls for a refresh, all five women used the same adjective to describe Moore’s unprecedented 17-year stewardship: “impressive”. 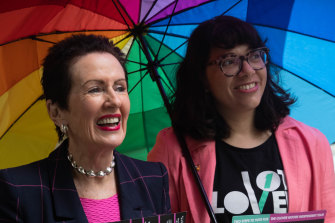 The five include Yvonne Weldon, the first Aboriginal Australian to stand for lord mayor in Sydney or any Australian capital city. Such milestones are more than identity politics; for those who feel passionately that politics should represent the people it serves, they are a cause for optimism, and long overdue.

As well as the five challengers, I interviewed Deputy Lord Mayor Jess Scully, who made the point that, until recently, local politics – poorly paid and demanding of time – was primarily the domain of well-off retired men. As a younger person on council, she can combat criticisms that Clover Moore’s Independent Team has become elusive, saying it does local politics in a different way. Constituents regularly slide into Scully’s Instagram DMs for chats, she says.

Rather than having property owners (or worse, developers) sit on council, Scully argues that long-term renters – as she was when she first entered politics – make vital contributions, especially on subjects such as housing affordability. If you can’t see it, you can’t be it; she models what’s possible in terms of power redistribution in this property-obsessed city.

It’s significant, given two candidates – Shauna Jarrett (Liberal) and Angela Vithoulkas (Small Business Party) – support businesses being given two votes. All other candidates, understandably, call this a gerrymander that favours the privileged.

That said, the jury’s out on whether Moore’s team has made decent inroads on affordable housing. Greens candidate Sylvie Ellsmore is pushing for more ambitious targets.

Having a truly diverse array of voices around any table of power ensures better results for those traditionally locked out from those decision-making discussions, yet something else has emerged to make this mayoral election notable: a sense of inevitability. It’s hard to argue with the record set by Moore’s 17-year reign. There’s a reason she’s never lost an election: the city is solvent, green and packed with beautiful pools and essential bike lanes. But there’s a feeling the remarkably resilient politician could become a victim of her own success.

Some have declared the mayoral race a forgone conclusion. The two highest profile candidates – independent Kerryn Phelps and Liberal Christine Forster – both pulled out. Moore’s campaign manager Alex Greenwich declared an expectation of winning an eight-seat majority of the 10 available. That’s all candidates on her ticket.

All the challengers expressed to me concern at this “hubris”, labelling it bad for democracy and political diversity. They have a point. If eight hands automatically shoot up at any proposal, even if they’re democratically voted in, voices representing other groups risk going unheard.

The personal revelations the candidates shared convinced me of this. Even if they’re unlikely to become lord mayor, their voice as a councillor around that table is significant. It holds Moore’s long reign to account. It also brings fresh perspectives. Challenger Linda Scott told me her sister, Kylie, who has Down syndrome, is the driving force behind her passion for equality. She understands, on a level other candidates may not, that residents such as her sister can make great employees, that they can become financially independent. Her input on the council’s strategy for people with disabilities is crucial.

Angela Vithoulkas, meanwhile, shared her heart-wrenching grief at losing her 18-year-old business, Vivo cafe (and radio station), in Sydney’s CBD. Who else might fight as passionately for fair compensation for small businesses ruined by the light rail? Or who, other than Yvonne Weldon, will call out the fact that none of the city’s 25 publicly funded statues depicts a First Nations person?

It’s important in this local democracy to know there’s a natural home for your vote if, for example, you prefer cycleways prioritised by (Clover Moore) or car parking (Jarrett).

Of course, constituents can vote below the line to reflect the plurality of voices they want around that table of 10. That plurality – not Clover Moore alone – is what has made our city shine.

Gary Nunn is editor-at-large of the Sydney Sentinel, a progressive online news site.