A WOMAN who "married" a lesbian zombie doll after falling in love with it as a teen now has six children of the dead with the creepy-looking figure as well as an alien boyfriend she dates on the side.

Felicity, a 23-year-old from Massachusetts who runs the YouTube channel Dollygirl20, tied the knot with the inanimate doll she calls Kelly Rossi in September 2018. 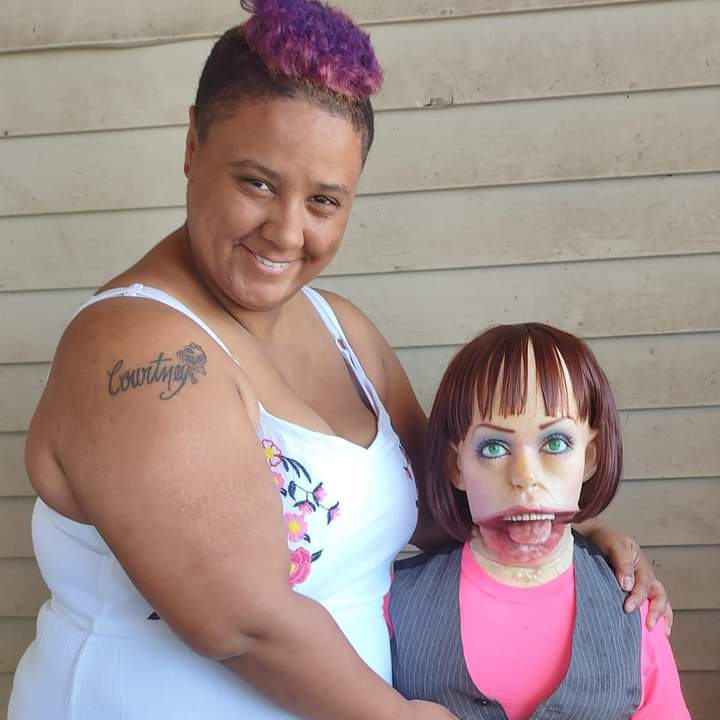 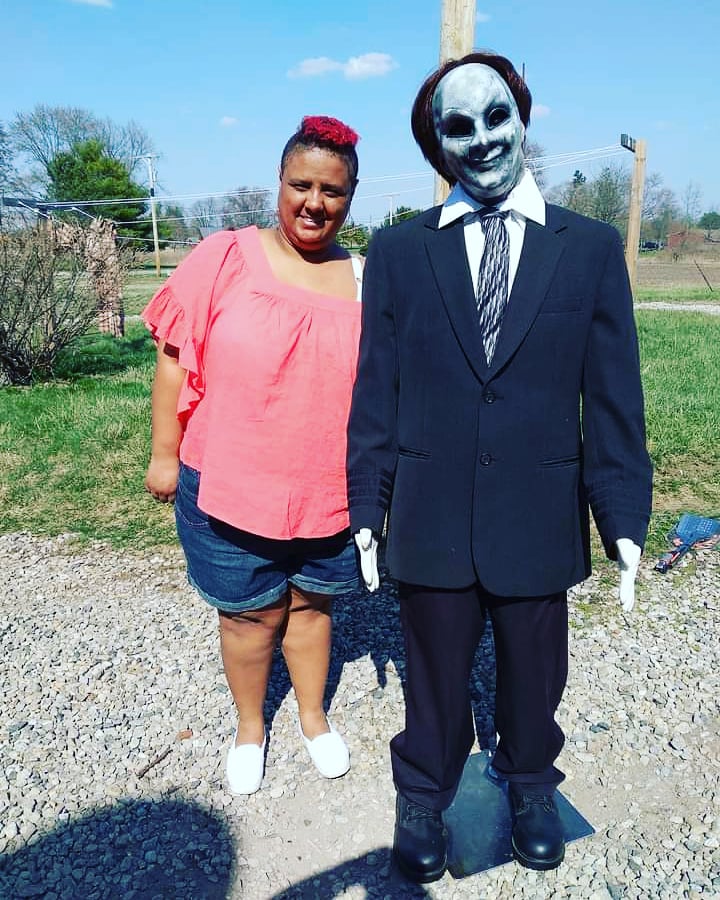 Speaking exclusively to The Sun, Felicity said she locked eyes with Kelly while roaming the internet when she was a horror-obsessed 10-year-old. She begged her parents to buy it for her but they insisted she was too young and the doll too scary looking.

Then, when her mother tragically died a few years later, her father eventually agreed to buy the figure – complete with a blood-stained face and missing jaw – as a gift for her 13th birthday.

"There was no romantic interest in Kelly at first as I was just a kid," Felicity said. "But we grew closer over time, particularly after my dad died, and I fell in love with her when I was 16.

"What I liked about her is that she represented to me a kind of Peter Pan Syndrome.

"At the time she was a young adult zombie with an older soul. I always wanted to stay being a kid, but also do more adult things like staying up late, eating whatever I want, not having to go to school, and saying what I want to say when I want to say it."

'TILL DEATH DO US PART'

Describing the event as a "special day", the wedding cost Felicity around $500 and was attended by a handful of family and friends, in addition to eight other dolls from her macabre collection.

Kelly, who Felicity described as a "tomboy", donned a suit for the occasion while she wore a white dress and veil.

The pair kissed, danced, and embraced in the front yard of the home as they exchanged vows while neighbors watched on in understandable shock.

The prying eyes of onlookers did little to sour her mood on the day, but that changed in the weeks and months ahead when Felicity says she was inundated with abuse from trolls on social media.

"After the wedding, I was getting all of this hate on social media," Felicity said. "It was really kind of hard to deal with and became really difficult after a while."

Some of the trolls, Felicity said, accused her of being a pedophile because of Kelly's child-like appearance. Others told her to "just kill herself" while hurling an array of vicious insults at her.

"It made me feel suicidal and that my life wasn’t worth living or valuable in any way," Felicity reflected.

"There’s a lot of people out there that are accepted for things they do: some people get dressed up as animals – furries – for some reason and you know, some adults even dress up as babies. So why me?"

The constant messages of abuse and hate eventually began to take their toll on Felicity's relationship with Kelly, she said, culminating in Felicity ripping the doll limb from limb, screaming that she "hated" her less than two years after their nuptials.

"One day I just snapped and went into the bedroom of my apartment and just ripped her apart.

"I destroyed her body out of hate because of the hate I was getting. I said I hated her, but really I hated the way people were making me feel about her." 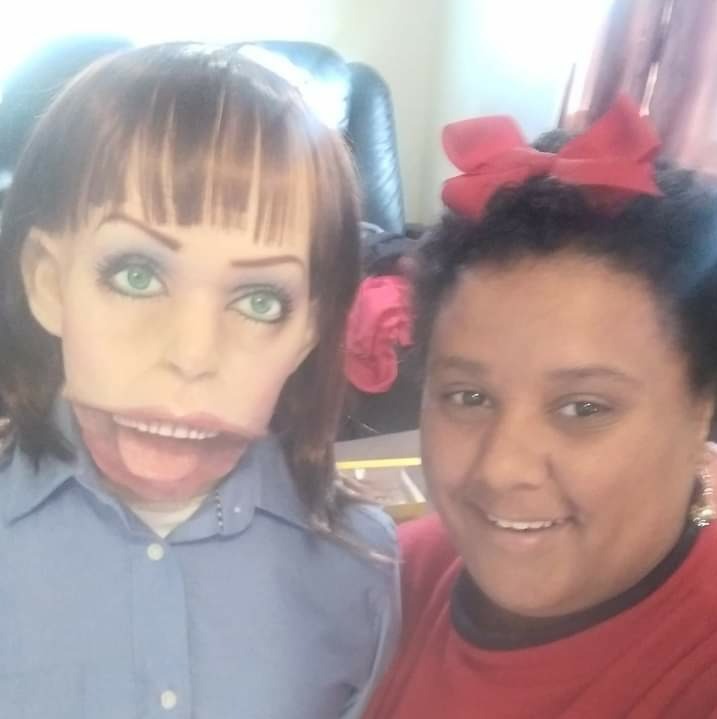 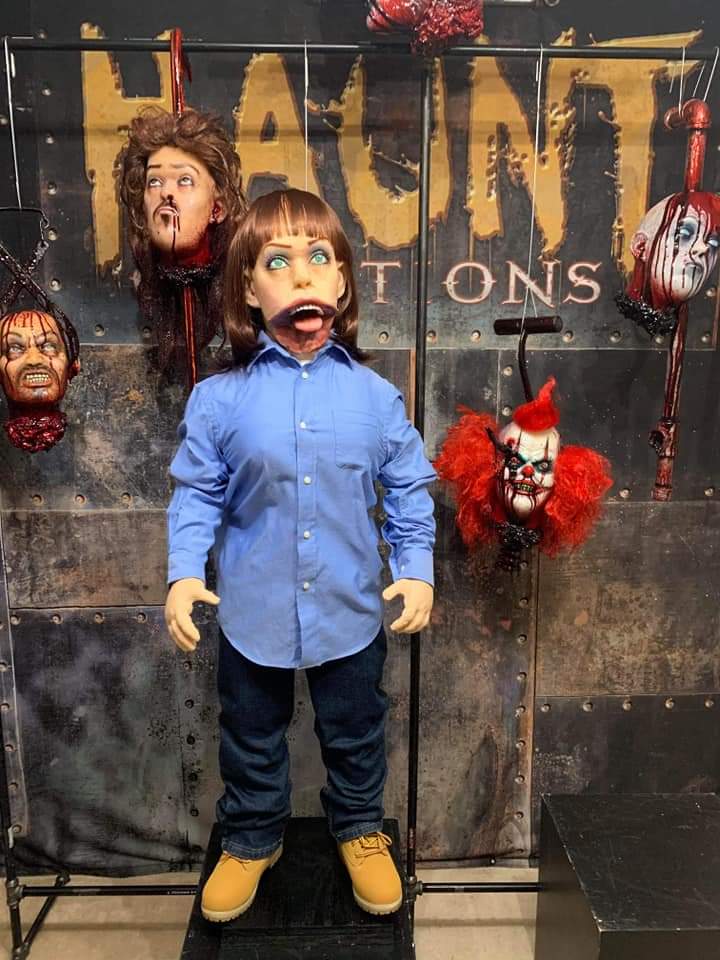 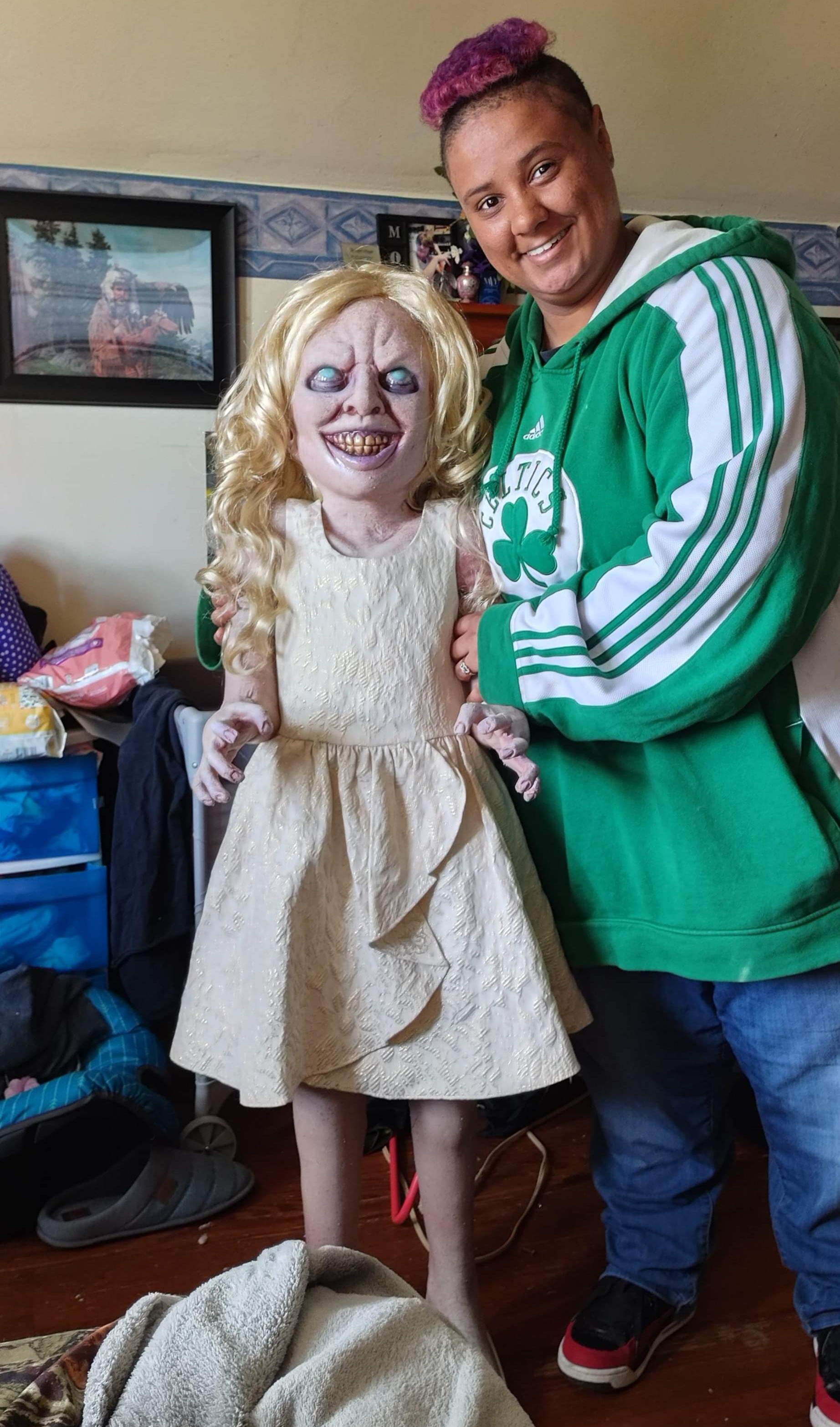 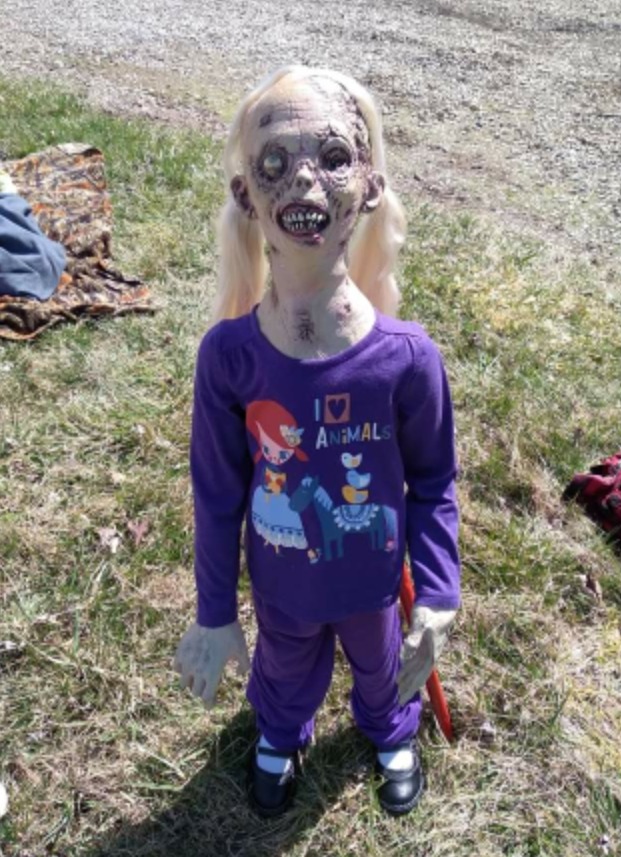 A heartbroken Felicity decided to try her hand dating humans again. She had a boyfriend for a time but the pair separated after she "did something stupid", which she claims had nothing to do with the dolls.

Felicity split from her boyfriend in September 2020. Alone once again, she said her attention quickly shifted back to Kelly.

"I tried to put the dolls away for a long time but I just couldn't," Felicity said. "I went back to Kelly. I wanted Kelly back."

Felicity then had Kelly rebuilt and re-designed by Haunt Creations owner Chris Raznick. She had Kelly's once-blood-covered face replaced with a less-ghoulish complexion – though her lower jaw is still missing entirely.

She also had Kelly's body modified to include breasts and a more womanly shape.

Felicity said she and Kelly quickly rekindled their romance, describing their relationship as "intimate" and "passionate."

She said they regularly express their love physically. She's also hoping to get Kelly a new, more posable silicone body to take their sexual conquests to new heights in the near future.

The couple has six "children" together – made up of other dolls from her collection – including Luna, a blonde-haired zombie kid with a scar across her face; Rachel, a brunette with "rotting" flesh; Billy, a ghoulish-looking child; Molly, who is missing chunks from her face; Holly, a wide-eyed corpse; and finally Gremly, a small green gremlin.

Despite finding happiness with Kelly once again, Felicity said her head was turned recently when she suddenly became romantically interested in another one of the dolls from her collection: Robert, a six-foot-tall alien she bought when she was 17.

Felicity said she was previously involved with Robert romantically when she first got him but eventually friend-zoned the muscular doll after she "ended up falling in love with Kelly."

Still, Robert waited patiently on the sidelines, Felicity said, before the spark between them was reignited a few months ago.

"I suddenly felt like I wanted the kids to have a daddy," Felicity said. "He protects me. He's a good guy but he doesn't take any crap if somebody messes with his family – and me and Kelly are his family."

Felicity insists that Kelly was "supportive" of her decision to start dating Robert on the side, and "isn't jealous" in any way.

'SHE DOESN'T GET JEALOUS'

Explaining the dynamic of their polyamorous tryst, Felicity said Kelly is a "full-blown lesbian and doesn't interact [sexually] with Robert."

"Robert is with me, and Kelly is okay with that," she said. "I never feel like I'm cheating on her because she always knows when I'm with him.

"She doesn't get jealous, I don't think. Robert and Kelly are pretty good friends.

"I think Kelly gets more scared when there’s a human involved because she’s afraid they might try to make me be who I’m not and to encourage me to get rid of the dolls." 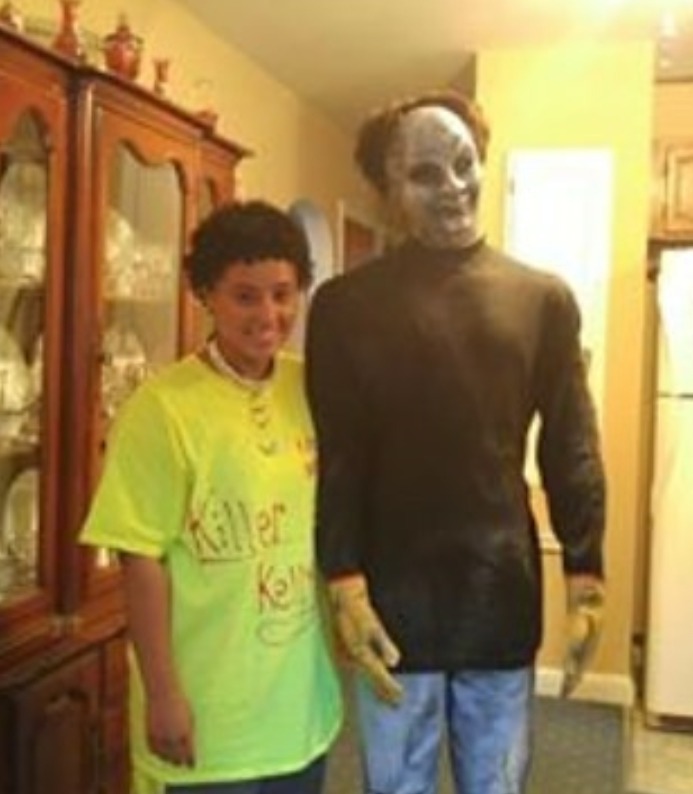 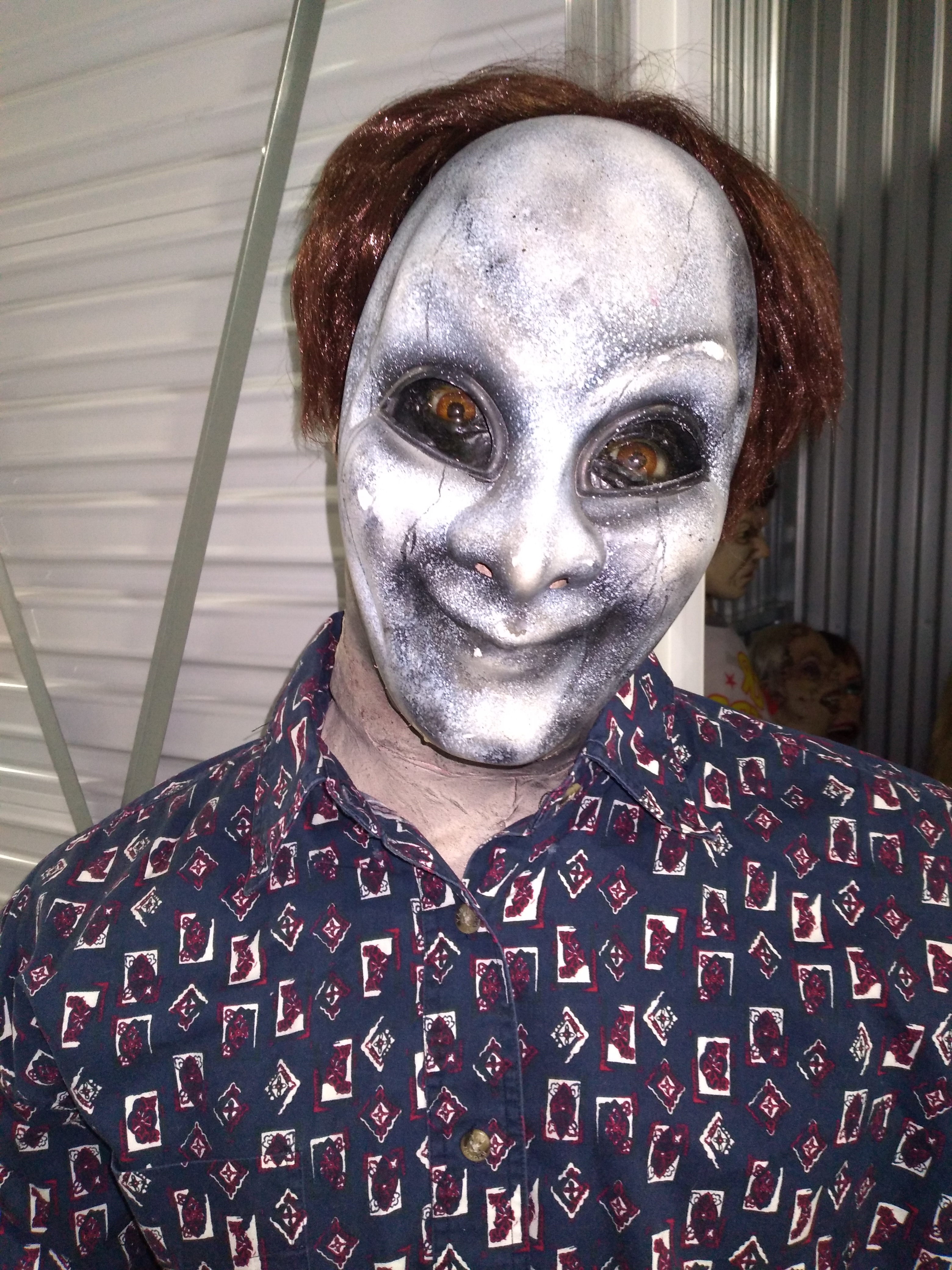 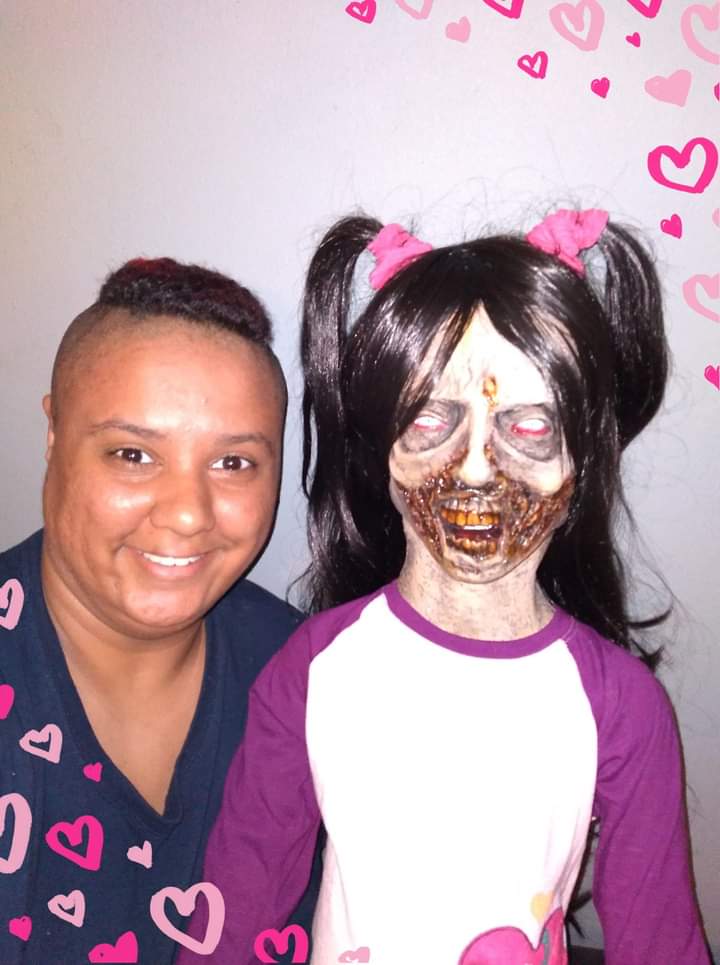 Over the last few months, Felicity says she's learned to be less bothered by the opinions of others, including those of strangers and even members of her human family.

Exploring her newfound resilience, the 23-year-old says she occasionally ventures out in public with either Robert or Kelly but concedes there's a "time and a place for everything."

"I wouldn’t take them to a funeral or a wedding or anything like that," she said.

"But I do go out with them here and there, like going shopping or going to the park or taking them to my therapy sessions.

"People will stare and say 'That’s scary!', or 'Oh God!', or 'That’s weird' or whatever but it doesn’t bother me because I’m not going to see them again.

"They don’t know me, they’re not going to bed with me, they aren’t helping me to pay my bills," Felicity continued.

The young woman, who is currently unemployed, said she has previously been criticized by members of her family but says she "doesn't think they really care" about what she does anymore.

Felicity says she has endured strained relations with the remaining members of her biological family in recent times, citing years of alleged "emotional abuse". She is also currently estranged from her adoptive family.

When asked by The Sun whether the dolls are a way for her to create the stable family unit she's currently lacking in the real world, Felicity said: "I'm not sure.

"It does mean a lot to have [the dolls] and I think I did a good job. It has given me stability.

"One thing people always think is that it's a fantasy and say, 'Oh, you're just a fantasy. You guys never argue this and that's nothing like real relationships – that's unhealthy.'

"But actually, one thing I wanted to mention is that we do argue – I argue with their spirits.

"I believe they have souls. But not souls of other people that have died but instead energy that I've obtained from them over the years or given to them."

'I'LL NEVER PUT THEM AWAY'

For Felicity, quality time with her doll family has been in short supply of late after she was recently kicked out of a family member's home and forced to seek refuge at a homeless shelter.

While she works on finding herself a more permanent place to stay, the dolls are currently locked away in a storage unit.

But while they're temporarily separated, Felicity said she is still thinking of them and currently has no plans to go back to dating humans again.

"I really don't know anymore," she said. "Part of it is that if I go with a human they have to be accepting of the dolls.

"Because I’m not ever putting them away again," she said. 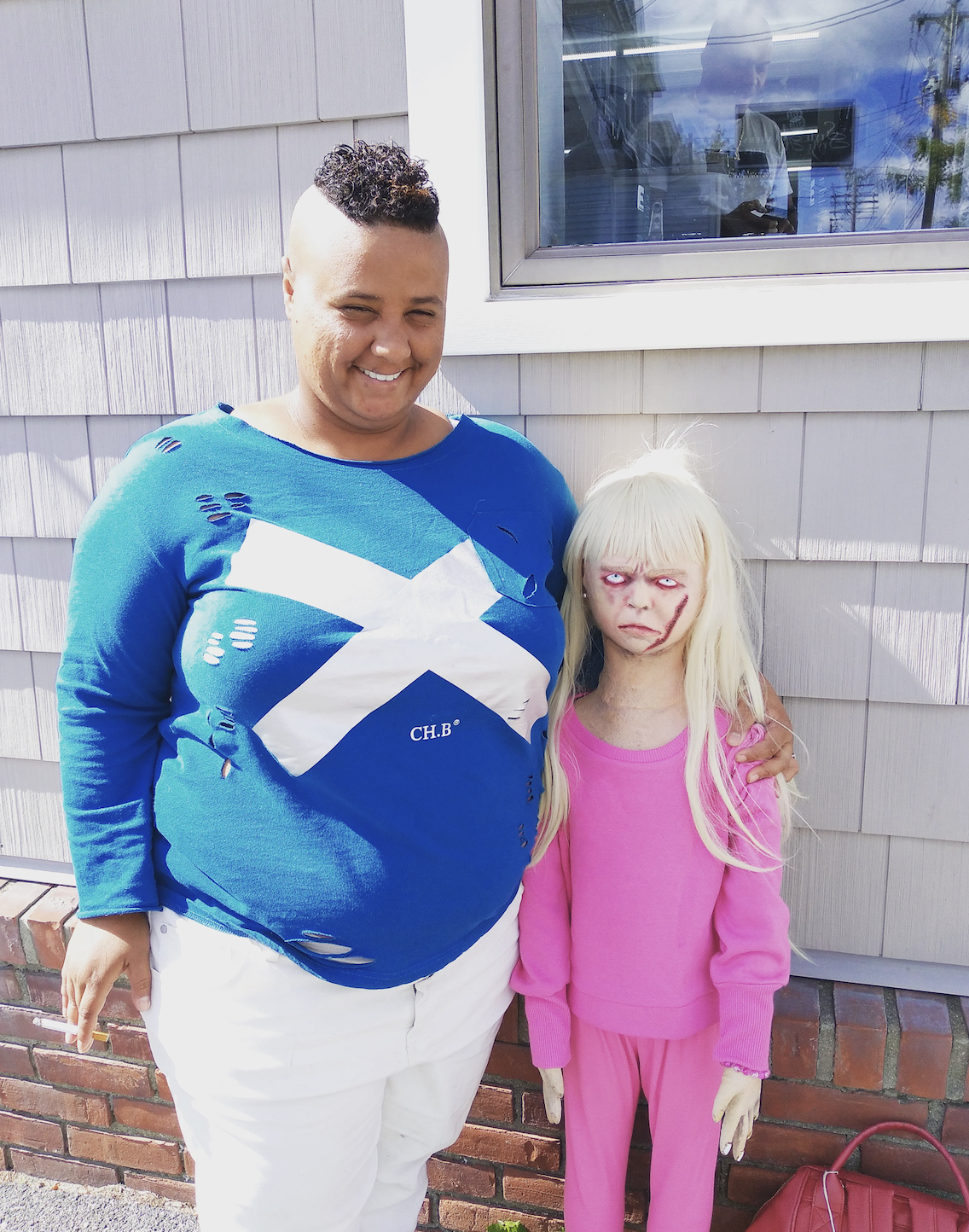 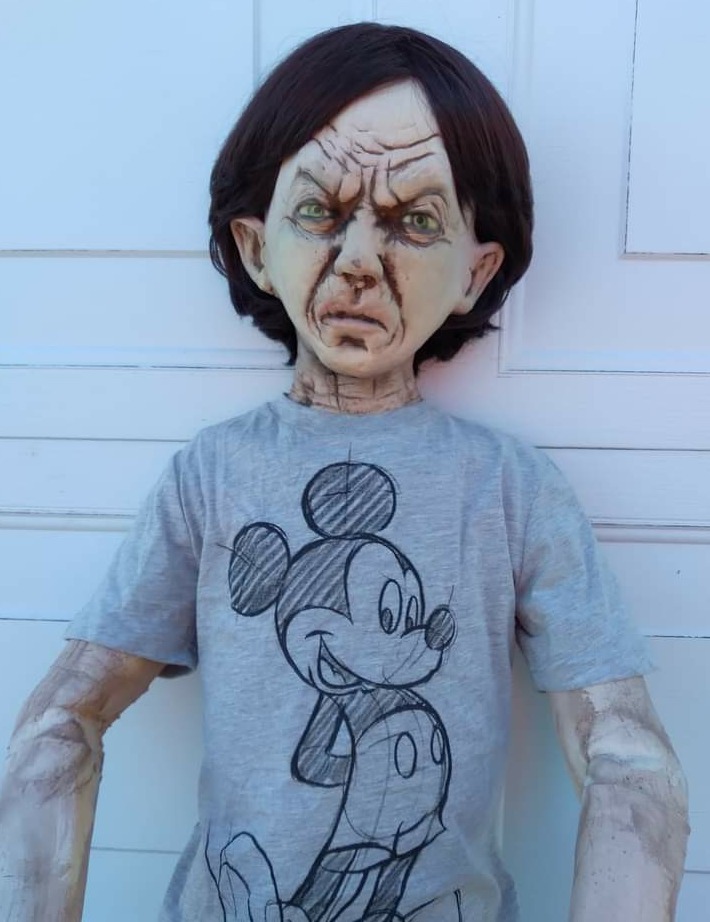 Do, I, Lesbian, married, my, zombie
You may also like: