'I want a leadership position': Tom Tugendhat speaks from Europe

‘Of course I want a leadership position’: Tom Tugendhat speaks from Europe’s new refugee front line after his electrifying Commons speech on the Afghan crisis sparked predictions he’ll be our next PM

It is the speech that triggered private messages of praise from ex-presidents and prime ministers alike – and led to predictions that the man who gave it will follow their path to high office.

Within hours of delivering his electrifying address to the Commons last week, in which he raged against the ‘abandonment’ of Afghanistan, Tom Tugendhat was standing on the razor-wired border that Lithuania shares with Belarus, Europe’s last totalitarian state.

Behind him, hundreds of migrants a day, including Afghans, are flooding into Lithuania – and therefore the EU – with the numbers expected to swell after the turmoil in Kabul. 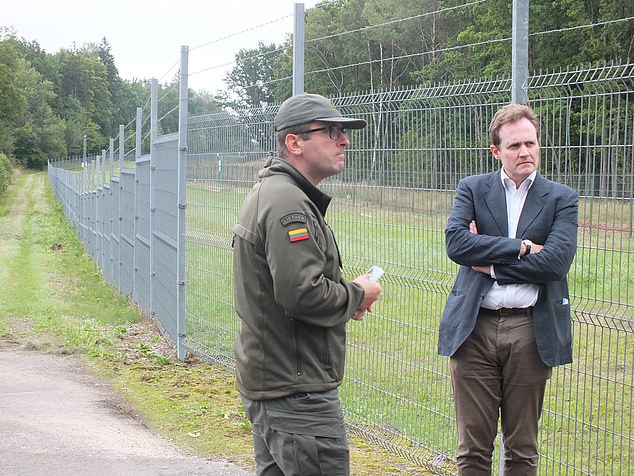 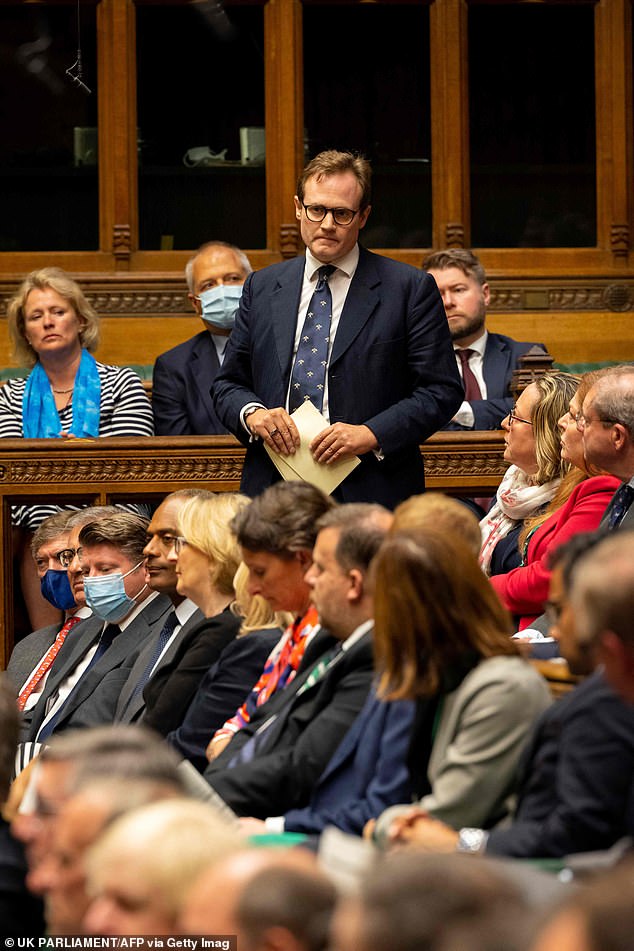 In a classic Tugendhat move, the former reservist intelligence officer starts engaging with the migrants in fluent Arabic: he learns that they have been flown in from the Middle East courtesy of President Lukashenko’s Belarus dictatorship – and then forced across the border into the EU in retaliation for supporting opponents of his regime.

‘Human trafficking is being weaponised by hostile states,’ declares the Tory MP.

Later, he will repeat his lacerating critique of US President Joe Biden’s ‘shameful’ conduct at a dinner attended by high-profile opponents of another foe – Vladimir Putin.

The chairman of the Commons Foreign Affairs Committee is clearly running on adrenaline after his Commons speech, which was heard in rare silence and greeted with even rarer applause.

Visibly emotional, he described the anger and grief felt by veterans over the US and UK’s rushed retreat: ‘I’ve watched good men go into the earth. Taking with them a part of me and a part of all of us.’

As for Biden’s ‘shameful’ accusation that Afghan troops did not want to fight as the Taliban advanced, he said: ‘Those who have never fought for the colours they fly should be careful about criticising those who have.’

As he speeds around the Baltic countryside, the MP’s phone buzzes with congratulations from Tory colleagues pricing up the chances of a future Tugendhat leadership bid.

So does he want to be Prime Minister? ‘The point of politics is to try to do your best for your country and the people we serve.

‘I’m determined that this is about putting our people and our country first. Of course I want to try to shape decisions. Of course that means I want leadership positions, because that’s how you bring about change. But you can’t do it alone. The key is to have a strong team, working together on the same mission.’

That is a ‘yes’ in plain English.

Mr Tugendhat, 48, Tory MP for Tonbridge and Malling since 2015, is part of a powerful clan: a Catholic of Jewish ancestry, his father is Sir Michael Tugendhat, a retired High Court judge, and his uncle is Lord Christopher Tugendhat, a former Tory MP. His wife Anissia is a French supreme court judge whose father was France’s ambassador to Beijing. The couple split their time between London and a home in an idyllic corner of his Kent constituency.

He says that more important than the congratulations from presidents and prime ministers – he is discreet about identities – were the messages from the widows of soldiers killed in Afghanistan.

One wrote: ‘Your speech has helped me immensely and I feel so reassured that someone in Parliament genuinely understands…

‘I listened to it again in the garden this morning. Yes, I had tears in my eyes – because yes, you get it, you understand.’

Mr Tugendhat says: ‘I’ve had some extraordinarily kind comments from many people. The ones which have touched me most are the ones from those who have lost most, and have very kindly said that what I said mattered to them.’ Nonetheless, he is flattered by the volume of messages he has received – and the status of some of the senders: ‘It is extremely kind of former heads of state and prime ministers from several countries to reach out to me after a speech. I am very grateful they have done so. It’s not about me – it’s about what we are trying to do really matters, and the effect it has had on so many.

‘I have been surprised by how so many US military officers, retired and serving, have contacted me. It is quite clear that a lot of them are also wondering how this decision will affect them and how it will shape all of our lives.’

He fails to disguise the tensions with Foreign Secretary Dominic Raab, who declined to compliment him on his speech when winding up the debate, and is fighting off calls to resign over his failure to return from holiday during the crisis. After referencing the ‘pretty extraordinary decisions’ taken by the Foreign Office, Mr Tugendhat pays tribute to the performance of other departments: ‘I think the Home Office and the MoD have done an exceptional job in delivering a rapid turnaround in Kabul, and they deserve enormous praise for their courage and adaptability.’

At dinner in a heavily guarded lodge on the edge of a lake, he tells guests – including Mikhail Khodorkovsky, the Russian oil mogul who ended up in prison after feuding with Putin, and supporters of jailed Russian opposition leader Alexei Navalny – that Biden’s America is a self-interested ‘lion which wants to sleep quietly in its bed’. He quotes Churchill: ‘The one thing worse than going to war with allies is going to war without them.’ 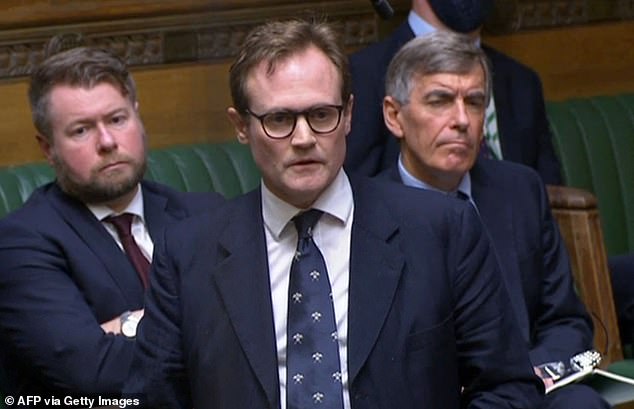 Within hours of delivering his electrifying address to the Commons last week, in which he raged against the ‘abandonment’ of Afghanistan, Tom Tugendhat was standing on the razor-wired border that Lithuania shares with Belarus

His swipes at Putin’s ‘criminal state’ and his other bete-noire – China’s increasingly repressive reach – are crowd-pleasers.

He thinks the crisis will have a destabilising impact globally, as thousands flee Taliban rule.

Mr Tugendhat was greeted like a minor celebrity in Lithuania after his speech.

Gabrielius Landsbergis, the foreign minister, said: ‘It is great to see Tom here because it shows that Lithuania is not alone.’ With a population of barely three million, Lithuania is dealing with up to 300 migrants a day, including Afghans and Iraqis, encouraged across the border from Belarus as part of its ‘migrant attacks’.

A foreign ministry source said they expected more to arrive from Afghanistan via Turkey, which has regular flights to Belarus. As The Mail on Sunday reported earlier this month, Lukashenko’s regime is already believed to be funding flights of Iraqi refugees into Minsk.

After talking to the refugees, Mr Tugendhat viewed footage from border posts of armed Belarusian guards pushing migrants into Lithuania.

‘The Belarus regime shows that some countries are prepared to weaponise human trafficking to undermine neighbouring states,’ Mr Tugendhat said.

‘The growth of refugee camps, and the misery that brings, risks leaving more people vulnerable to being exploited by vicious dictators.

‘We need to remember what strengths we really have: the allies who are with us and who need us.

‘We can rebuild the networks and alliances that have kept us safe. We can put Britain back at the heart of a network.’

a, I, leadership, posi, Want
You may also like: