Follow
Home » World News » 'I will do anything to protect my crew,' HMS Defender captain says

‘I will do anything to protect my crew’: Captain of HMS Defender warns the Kremlin he will do whatever it takes to protect the 240 people serving on his ship after Russian patrol vessel fired near the British destroyer this week

The captain of HMS Defender has warned the Kremlin he will do whatever is required to protect the 240 crew serving on his ship.

Speaking exclusively to the Mail, Commander Vincent Owen strongly criticised Russian forces for threatening him and the men and women under his command.

On Wednesday, a Russian patrol vessel fired repetitive thudding bursts from its 30mm cannon near the British destroyer moments after Cdr Owen ignored their orders to steer away from Crimean waters.

The dramatic incident witnessed first-hand by the Mail plunged UK-Russia relations to their lowest point since the Salisbury poisonings in 2018.

Cdr Owen, 42, accelerated to overtake the Russian border vessels and continued his course through Crimean territorial waters. It was then the bursts of cannon fire were heard on her port side. It followed a series of radio messages that a gunnery exercise was occurring in the area.

Cdr Owen said: ‘I have always got the inherent right of self-defence, to defend the men and women aboard the ship.

‘It is part of my orders delegated to me by the commanding officer of the Carrier Strike Group (CSG).

‘They then fired from one of their coastguard ships. On this occasion, I was comfortable I was acting within that delegated authority. I knew the range of their weapon systems aboard the border patrol vessels and maintained the necessary speed to remain at a safe distance. 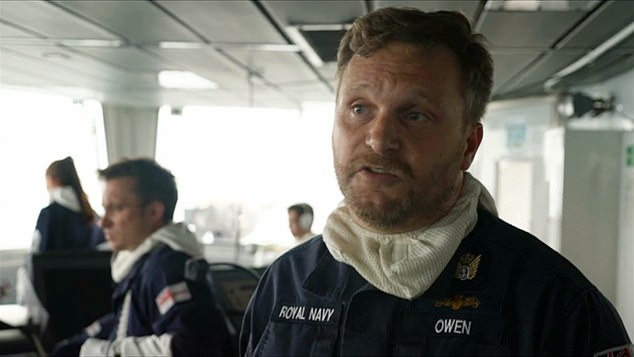 The captain of HMS Defender has warned the Kremlin he will do whatever is required to protect the 240 crew serving on his ship. Speaking exclusively to the Mail, Commander Vincent Owen (pictured) strongly criticised Russian forces for threatening him and the men and women under his command

‘I have 21 years’ experience and this is a top-of-the-range air defence destroyer. I don’t think they expected to be outrun by an 8,000-ton warship. It was a great feeling to overhaul them.’ The married father joined the Royal Navy after becoming disillusioned with a City finance career.

He flew Lynx helicopters for six years before switching to commanding ships. Cdr Owen was able to send a message to his family after Wednesday’s incident to reassure them he was well.

Last night, he dismissed Russian claims that they dropped bombs from warplanes, saying the destroyer’s radar systems are so sophisticated they could identify ordnance ‘the size of golf balls’.

Speaking about the pursuit by three Russian vessels for 200 miles yesterday, Cdr Owen added it was unusual for so many Russian ships to continue the chase.

He said: ‘I suspect that because of what happened [on Wednesday] they have been told to stay with us, even though we are just 20 miles off the coast of Georgia.

‘But we still have Russian airfields to our north from where their jets flew. Wednesday’s incident was the closest I’ve come to a Russian vessel in my career, 100 to 200 yards, but I would not say I was alarmed.

‘There is a risk every day at sea. It is a dangerous environment and I am on a seven-month deployment.

‘I also have a highly professional crew around me, it is a privilege to lead them. They’ve trained for 12 months for this deployment. They are on the top of their game.’ As part of the CSG, HMS Defender’s primary role is to provide air defence for the UK’s new aircraft carrier, HMS Queen Elizabeth.

Evidence gathered by signals officers among the crew about the incident will be flashed back to London to support the UK response to bogus Russian reports and the summoning of the UK ambassador to the Kremlin. Cdr Owen added: ‘There was an illegal attempt to block us – no coastal state can do that. They said they’d fire if we crossed into territorial waters and you saw what happened.’

Cdr Owen said he consulted with his commanding officer, Commodore Steve Moorhouse – based aboard HMS Queen Elizabeth – about the incident. But he denied reports that Downing Street may have been involved.

Weapons aboard HMS Defender were readied. Its arsenal includes the Sea Viper missile system capable of engaging supersonic targets – such as Russian aircraft.

Race for the moon: Bezos offers to spend billions to join Musk in NASA contract

'Made in America' companies create new products from recycled material

Paralympians are now paid the same as Olympians for winning medals