If you’re eligible, get vaccinated

This is a pandemic like no other in history. When the Spanish flu struck in 1918, common treatments included aspirin and cinnamon. In two years it killed up to 50 million people, finally ending when people’s own immune systems began to fight back and the virus, through mutations, became less lethal. It still exists today as a variant of seasonal flu. 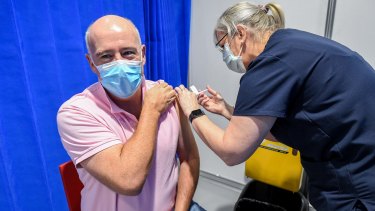 A man gets the AstraZeneca vaccine at the Melbourne Convention and Exhibition Centre.Credit:Joe Armao

This time around, modern science has given us the ability to understand, identify and track with incredible speed and accuracy the virus that causes COVID-19. While quarantine and social distancing have done most of the heavy lifting in restricting the virus’s spread, as they did during previous pandemics, new scientific tools, including rapid genomic testing, have amplified their effectiveness.

Without such advances, it’s unlikely that Victoria would have succeeded in stamping out the virus during last year’s strict lockdowns. While the outbreak this week has the city on edge, for the past few months, those tools have allowed most people to return to relatively normal lives. However, this improved scenario may have blinded some of us to the historic opportunity afforded us by another aspect of medical science.

The speed with which a range of vaccines were developed is an achievement beyond even the most optimistic expectations at the start of the pandemic. And with more than 1.7 billion doses now having been given globally, the real-world evidence of their effectiveness is coming in. It’s overwhelmingly good news.

Firstly, promising outcomes from clinical trials are being matched in nations that have enough access to vaccines to offer widespread coverage. As a result, fully vaccinated people are rarely succumbing to serious illness if they contract COVID-19. And while rare blood clotting for people receiving the AstraZeneca vaccine is a serious side effect, few other dangerous consequences have arisen.

Other promising signs are that the vaccines are proving highly effective in dealing with most variants of the virus, including the latest one from India, and a British study has found that a person who is immunised using either the Pfizer or AstraZeneca vaccine has a 40 per cent to 60 per cent reduced chance of spreading the virus.

Such mounting evidence recently led the US Centres for Disease Control and Prevention, which sets many of the nation’s guidelines for restrictions, to give the go-ahead for vaccinated people to not wear masks or socially distance indoors and outdoors, no matter the size of the crowd. With the announcement this week that half of adult Americans are now fully vaccinated against COVID-19, that is a lot of people who can safely return to a relatively normal life.

Meanwhile, Australians appear to be responding to this historic opportunity by slow-walking their way to being vaccinated. Take-up has not been helped by a federal government that is showing no signs of increasing its calls for people to get vaccinated, and an apparent continued reluctance to mount an engaging public information campaign.

Acting Premier James Merlino said on Wednesday that the supply of vaccines was no longer a problem; the problem was the supply of willing recipients in Victoria. With the latest outbreak of the virus in Melbourne, now is the time for those who are eligible to act.

The science is being rapidly published and it is offering a convincing argument that getting vaccinated is safe, will protect you from serious illness, and is the most effective way to protect those you come in contact with.

We have all be given the opportunity to play a role in shutting down a virus that has caused global upheaval and death. It’s time to seize that moment.

The Age’s editor Gay Alcorn writes an exclusive newsletter for subscribers on the week’s most important stories and issues. Sign up here to receive it every Friday.

eligible, Get, If, vaccin, youre
You may also like: